Convoy, a logistics marketplace that connects shippers with carriers, has announced it is now using automation to match 100 percent of loads to trucks across many of its main markets.

Founded in 2015, Convoy is seeking to do for the logistics realm what Uber has done for urban mobility by serving as an on-demand platform to connect truckers with companies that need to shift cargo from A to B. It essentially matches supply with demand and optimizes journeys so the nearest driver is matched with the most appropriate load. It’s worth noting here that Uber itself actually expanded into freight back in 2017, reappropriating its core transport network platform, much as it did for food delivery with Uber Eats.

With Convoy, drivers effectively search for loads on their preferred routes and accept a shipment based on the price offered, or submit their own bid if they think the offer is too low.

Above: Convoy: Bids and offers

Convoy said it has been edging ever closer to a 100 percent automated match rate — in which the platform pairs shippers and truckers without any human intervention — in all of its markets. The pricing aspect, which involves getting the two parties to agree on a rate once they’ve been matched, is also now largely automated across the country, though it’s not quite at 100 percent.

Nationwide, the company claims 95 percent automated match rates; however it has already hit 100 percent automation in its main markets, which include routes along the West Coast that take in Seattle, Portland, and Los Angeles, in addition to Midwest routes entailing Chicago, Cincinnati, and Milwaukee. Convoy said it’s also 100 percent automating its matching in core markets across Texas, Northeast routes that include New York and Philadelphia, and Southeast routes involving Atlanta and other cities. 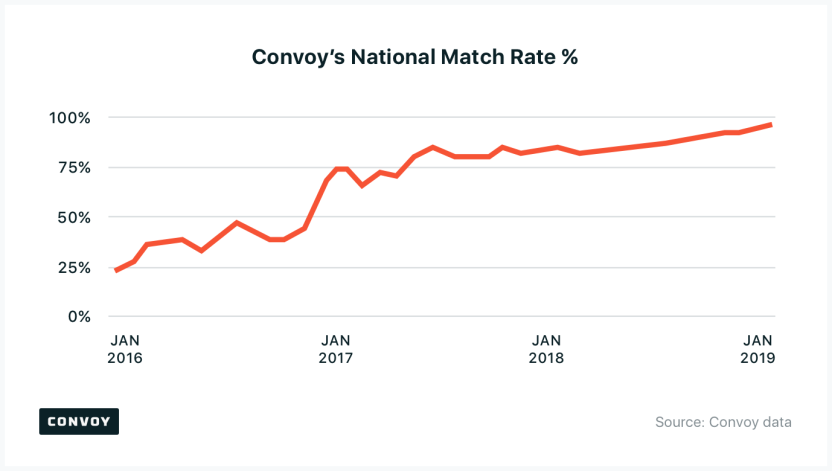 In terms of what is stopping Convoy from hitting 100 percent automation across the board, the company said that as it adds new carriers and shippers to its network on a continuous basis, there are “varying ramp periods” on the way to becoming fully automated — due to bedding-in processes. Additionally, as the company fine-tunes its markets and routes, its brokerage team will sometimes have to intervene on some of the more complex shipments.

The trucking industry generates more than $700 billion in revenue in the U.S. alone, representing roughly 80 percent of all freight revenue in the country. One of the reasons automation is playing a pivotal part in improving efficiency in the freight industry is that it could typically take up to 10 phone calls to find an available truck for a specific load at a specific time. Automated marketplaces that cut down on this back-and-forth between parties can reduce costs while theoretically speeding up shipments.

“It is much harder to match a truck than it is to match a taxi, for example,” Ziad Ismail, Convoy’s chief product officer, told VentureBeat, “since trucks can move across the entire country and may already have plans for a week in advance. This has been one of the problems that the industry has struggled with the most in thinking about what automation could look like. We have been working on it for more than three years and have now effectively eliminated that entire part.”

Convoy also said that its machine learning smarts improve with each load, so it can better match shippers with carriers. “Convoy learns from carrier behavior,” Ismail added. “With each load, we get better at recommending the next load.”

Uber, for its part, is increasingly turning to automation to streamline its freight service. Back in November, it announced it was harnessing machine learning to give shippers precise rates two weeks in advance. The Lane Explorer feature assesses dynamic factors that normally impact pricing to generate future rates in real time.

Automation is infiltrating just about every sector these days, and as an industry that’s zeroing in on the trillion-dollar mark in the U.S., trucking is no different.