Deep Sentinel, a physical security startup that leverages cameras, AI, and around-the-clock monitoring to prevent break-ins, today announced that it has secured a strategic investment from Nationwide that brings its total series A funding to $24 million, up from $7.4 million. (Deep Sentinel declined to reveal the size of the investment — simple subtraction suggests it’s around $16 million, but Deep Sentinel says there have been undisclosed “additional investments” to the series A round.) Coinciding with the capital infusion, the company launched a new product — Deep Sentinal for Business — designed to provide after-hours protection against crimes like vandalism and theft for small and medium-sized enterprises.

Deep Sentinel for Business, which the company says underwent 10 months of user testing with over a dozen customers, recruits live guards to respond to alerts in 10 seconds or less. From a dashboard, the guards can see every time a person enters or exits a property, and they’re able to engage with potential criminals with two-way audio or contact law enforcement “in seconds.”

“Unlike other service providers, Deep Sentinel helps prevent crime through smart detection and live, human intervention — our goal is to actively stop a crime from ever occurring, rather than simply alerting businesses after the damage is done,” said Deep Sentinel cofounder and CEO David Selinger, an early employee at Amazon who previously cofounded homeowner marketplace Redfin. “It’s like having a trained guard at every access point on your property, but at a fraction of the cost.” 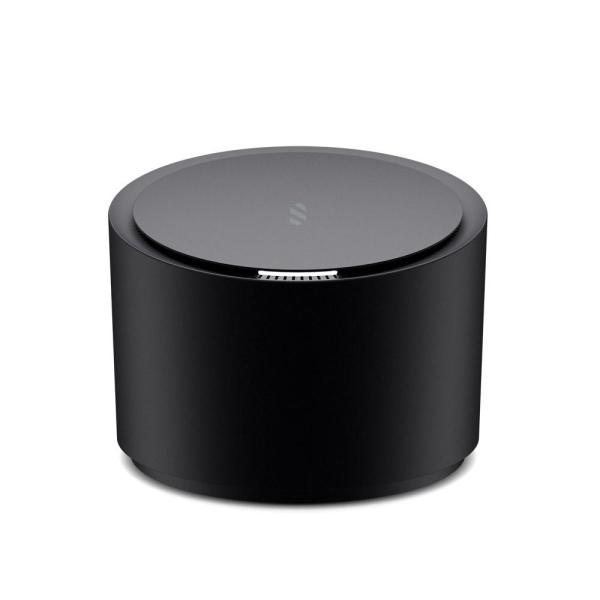 When it comes to deterring would-be car thieves and box bandits, Deep Sentinel takes a multipronged approach. Its custom-designed smart cameras work in conjunction with an on-premises AI processing hub to lay out a surveillance zone in real time. The hardware was created in partnership with Ammunition — the design studio responsible for Lyft’s LED emblem and Square’s point-of-sale system — and is the culmination of feedback from more than 50 police departments. Selinger claims that’s one of the reasons police response times with Deep Sentinel are 70% better on average than with the competition.

The weatherproof, IP65-rated cameras record in HD with a 130-degree field of view, wake up from standby in less than 250 milliseconds, last months on a single charge, and pack motion-detected infrared LEDs with a 35-foot range. And they are able to distinguish between people, animals, cars, and other objects and detect suspicious behavior as it happens. As for the one-pound AI hub, its 64GB of flash memory can store up to six months of video footage, and its Qualcomm Snapdragon 820 system-on-chip processes up to 10 frames per second.

When the system detects that a crime is imminent, strobing red lights on the cameras light up to signal they’re recording, and the video feed is beamed to Deep Sentinel’s remote surveillance center. There, staff can choose to intervene with two-way speakers and loud sirens — the loudest on the market at 104 decibels — or contact police. Selinger claims response times are typically 10 to 30 seconds.

It all sounds very impressive, but peace of mind doesn’t come cheap. A pack of three cameras, one hub, and four rechargeable batteries starts at $400 (which includes a $200 upfront equipment deposit for new customers), and subscriptions are $50 per month with a one-year commitment. That’s quite a bit more than the $25 per month SimpliSafe charges for its top-of-the-line subscription, Brinks Home Security’s $40-per-month monitoring service, and Link Interactive’s $41-per-month tier.

But demand appears to be growing apace. According to a report from MarketsandMarkets, the home security system market could be worth as much as $74.75 billion by 2023, up from $45.58 billion in 2018. Moreover, analysts at Park Associates forecast that 27% of U.S. households will have security systems by 2021.

“Technology and protection products like Deep Sentinel support small business owners in safeguarding their livelihood, which is critical to operational success,” said Nationwide VP of commercial underwriting and product Tony Fenton. “Nationwide is proud to have spent the last 90 years empowering and protecting small business owners, which aligns well with the capabilities of Deep Sentinel.”

Deep Sentinel — which is headquartered in Pleasanton, California and has about 40 employees — counts Shasta Ventures, Bezos Expeditions, Lux Capital, and UP2398 among its other investors.