San Francisco startup Directly has raised $20 million in a third round of funding to build its customer service offering for companies leveraging AI and crowd-sourced experts.

In an interview today, Directly CEO and cofounder Antony Brydon acknowledges that the field of customer service providers is extremely competitive. But Directly fuses together the two main approaches in customer service that haven’t been brought together in one offering, he says: AI and crowd-power.

On the one hand, you have 50 to 100 AI-inspired customer support vendors like LivePerson, Kore.AI, and Pypestream, seeking to apply natural language or other forms of machine learning to answer questions with chatbots. On the other, you have customer support companies that try to leverage crowds, such as Satisfaction, Jive, and Lithium.

The challenge for the AI companies is that none of them have a data advantage, Brydon says. They offer either marginally better algorithm or user experiences. And for the crowd companies, they’ve lacked speed, accuracy, and consistency. “The quality of the system hasn’t been there,” he says.

Brydon uses an example of Microsoft to show how Directly resolves both challenges:

Six months ago, before Directly was implemented, a Microsoft user asked a question about a Surface computer or Excel spreadsheet, and Microsoft would route their question digitally to an outsourced call center. However, quality wasn’t supporting the brand, he says. 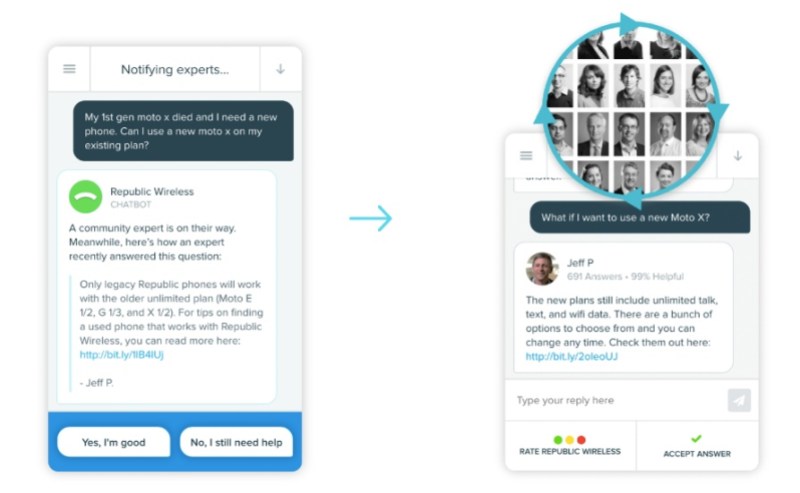 Above: Example of Directly’s AI customer service at work

Once Microsoft implemented Directly, the company helped Microsoft build a trusted network of experts — power users of Excel, the Surface, and other products — to answer questions instead. (Directly provides its experts a cash incentive, typically $2 to $60. Directly gets a 30 percent cut.)

The company then used AI to make the experts smarter. First, it used algorithms to cluster questions into topics. For example, if a question comes in asking how to reset voicemail on a Microsoft phone, Directly uses machine learning to identify it’s a question about Microsoft phones, and routes into the experts on that topic. Second, the Directly system uses AI to identify which experts are the top performers on specific topics. Directly does this by polling Microsoft’s wider expert network, asking them to rate the answers given by top performers on the phone questions. If a particular answer is better than others, it will start to dominate, and the expert who provided that answer earns more income every time that question is served.

He says that getting 10-12 votes on each question from experts creates “100 times the data” provided by most AI-driven customer support vendors.

After raising a seed round of $4 million and a round of $12 million, the company has now raised a total of $36 million. The investors include Microsoft Ventures, True Ventures, Costanoa Ventures, and Northgate. The funding includes $3 million in debt financing from SVB.

Mila D’Antonio, principal analyst at Ovum, who specializes in customer engagement and who has looked at Directly, says the company delivers the core needs of customer service in an innovative way. Given the debate about AI, and whether or not it will enhance the human workforce, Directly is refreshing in that it enhances human interactions instead of replacing them, she says. Moreover, AI is only as good as the data it uses, and Directly does well here by design: It infuses data with human expertise, she says.

Brydon says company identities are changing, which also makes Directly’s timing relevant: Instead of seeing themselves as owners of buildings and employees, companies see themselves as networks and communities, where they want to leverage talent on their edges — power users, affiliates, and other champions.

Directly is targeting a huge market, no doubt: The top 2,000 companies in the U.S. spend about $250 billion each year on supporting customers, Brydon said — that’s about 50 billion customer cases a year, with each query costing about $5 to answer. Large companies like Comcast are spending $2-3 billion a year. U.S. companies spend about $20 billion on tech solutions.

And yet, customer service ratings remain at about 75 percent. Directly says it gets those ratings up to an average of 93 percent, reduces response times to 2-3 minutes across digital channels, and cuts support costs by an average of 65 percent.

That’ll be enough for a lot of people, either as a sole income or as a nice supplement to their day job — if the the model scales. Will experts respond long-term without bidding up the price of their expertise to make things uneconomical? Crowd models have fared poorly when they bring generic talent (Mechanical Turk) or when they focus on low-value tasks (CrowdFlower), Brydon concedes. We’ve seen a string of other expert marketplaces models spring up, and payment often becomes the problem. Most recently, Streetbees, a marketplace for researchers, saw some users complaining about not getting paid enough. GLG and Maven, two other expert networks, appear to have plateaued or pivoted. There are plenty of gig economy companies, like Uber for shared rides and Upwork for freelance staffing, but participants on those networks often devote a significant amount of their time.

Brydon says Directly helps companies bring their own trusted talent (e.g., deeply skilled architects using Autodesk) to solve more valuable business problems so that rewards are more substantial. In that way, the future is on his side, he says, because companies are looking to unlock ever more developed talent pools.