Today at an event in New York City, Shenzhen, China-based company DJI, which accounts for more than 70 percent of the world’s drone market, announced two new additions to its product lineup: the Mavic 2 Pro and Mavic 2 Zoom. DJI calls them its “most technologically advanced drones” yet.

They’re the direct successors to the Mavic Pro, which launched in 2016, and feature the same folding design that made a splash in the market two years ago. Both go on sale today — the Mavic 2 Pro for $1,449 and the 2 Zoom for $1,249 — and are chock full of features like new video modes, 4K video recording, better object avoidance sensors, and a new real-time image transmission system.

The Mavic 2 Pro and Mavic 2 Zoom might not look all that different from their predecessor, but they’re “more aerodynamic,” DJI said — the improved designs reduce drag by up to 19 percent. They’ve got raked propellers, which help cut down on noise, and lights on the bottom to assist during low-light landings.

Both max out at top speeds of 44 miles per hour with 31-minute flight times (up from the original Mavic’s 28 minutes), and the aforementioned object avoidance system — Advanced Pilot Assistance System (APAS), a carryover from the original Mavic Pro — has been made more robust. It boasts 10 sensors outfitted with DJI’s 2.4GHz/5.8GHz OcuSync 2.0 tech, which can beam live 1080p footage to the drones’ remote control up to 5 miles away (compared to the Mavic Pro’s 1.2 miles). 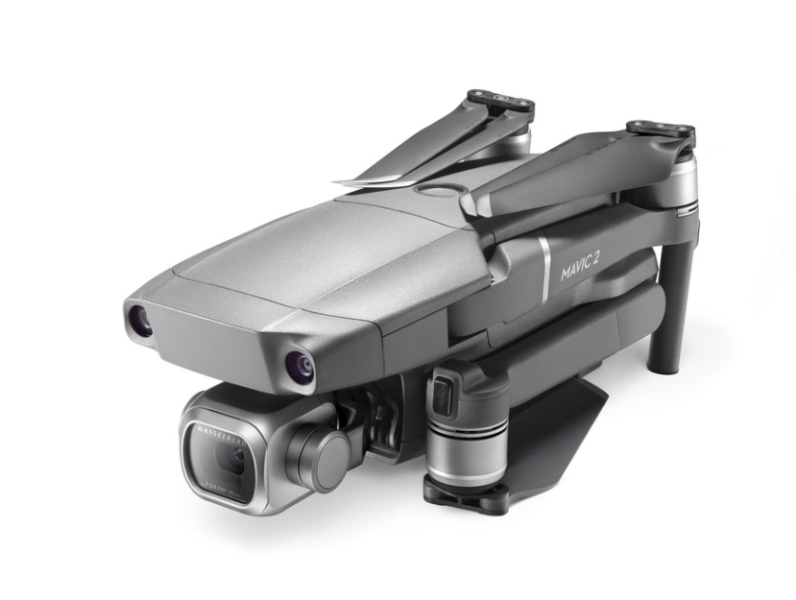 Onboard both drones are 8GB of onboard storage (expandable via microSD card) and cameras that can record video up to 4K in high dynamic range at 100 megabits per second. And on tap are four new shooting modes: Free, which pilots the drone manually while shooting a sped-up timelapse video; Circle, which automatically flies the drone in a circular pattern around a subject to create a timelapse; Course Lock, which keeps the camera fixed on a subject while the drone flies in a straight direction; and Waypoint, which plans a complex flight path based on altitude and GPS coordinates.

The Mavic 2 Pro and Mavic 2 Zoom might be cut from the same cloth, but they’re not totally identical. A key difference is the cameras.

The Mavic 2 Pro packs a CMOS sensor manufactured by Hasselblad. It’s 1 inch in size and 20MP, and has a variable f/2.8-f/11 aperture, 24mm wide-angle lens, and Hasselblad’s proprietary Natural Color Solution (HNCS) tech for enhanced color accuracy. (It has 4 times the color range of the original Mavic Pro, according to DJI.)

The Mavic 2 Zoom, on the other hand, has a 1/2.3-inch, 12MP sensor, but with a 48mm telephoto lens, 2x optical zoom and 2x digital zoom, and a Super Resolution mode that stitches together nine photos into a single 48MP image.