“Logging transport is a huge market,” Einride CEO Robert Falck told VentureBeat in a phone interview, “and it’s well-suited for autonomous vehicles. About 60 percent of the cost of a [logging truck] is associated with the driver cab, and an additional 25 percent is associated with the driveline and gearbox. Trucks [like the T-log represent] substantial cost savings.”

He’s not wrong. IbisWorld reports that the U.S. logging market is worth $16 billion, and in Sweden, where Einride is headquartered, it’s a billion-dollar enterprise.

The T-log — which shares much of its guts with Einride’s autonomous T-pod truck — is capable of level 4 autonomous driving, meaning it can operate with limited human input and oversight in specific conditions and locations. It’s powered by Nvidia’s Drive platform and uses a sophisticated combination of sensors — including cameras, lidars, and radars — and intelligent routing software to adjust its route to avoid congestion. This allows it to improve delivery times, battery life, and energy consumption.

Einride claims that the T-log’s 300kWh battery can last up to 120 miles on a charge. 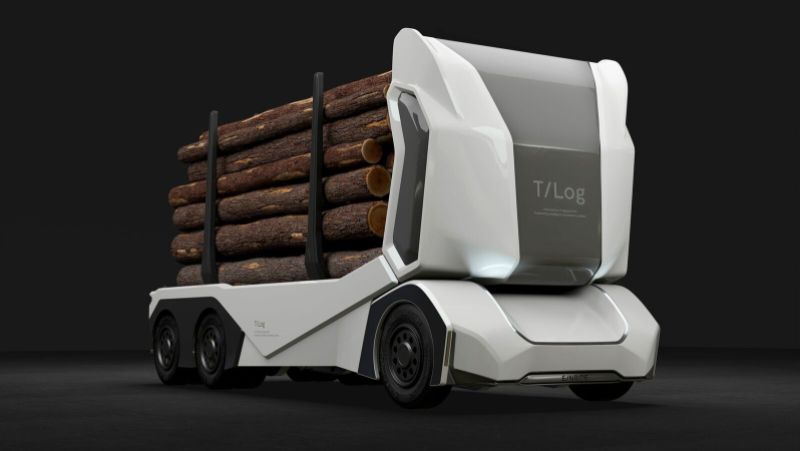 “Our goal was to create a cost-competitive transport solution that has the potential to replace human-operated logging trucks,” Falck said.

That said, the T-log isn’t strictly autonomous; like the T-pod, it takes a hybrid driverless approach. In especially tricky driving scenarios, it can be remotely controlled with Phantom Auto’s teleoperation technology up to “hundreds of miles” away, via a low-latency cellular connection.

“[R]eplace the driver with an operator who can monitor and remote-control several vehicles at once, and costs can be reduced significantly,” Falck said. “In addition, operating a vehicle from a distance allows for a much better working environment, as has already been demonstrated in industries like mining.”

But even when a human is in control, the T-log is much more environmentally friendly than conventional diesel-powered logging trucks, Falck points out.

“Heavy road transport is responsible for a substantial part of global carbon dioxide emissions. Add to that the tens of thousands of people who die every year from nitrous oxide pollution — effectively poisoned by diesel fumes — and you have every reason to look for a more sustainable alternative.”

Einride might be one of the first to market with an autonomous vehicle built specifically for logging, but it’s not the only self-driving truck business on the block. Last year, Embark launched a self-driving system tailored to long-haul trucking fleets, and Uber-owned Otto markets a semi-autonomous trucking solution that can navigate highways and industrial parks. (Uber, it should be noted, suspended self-driving tests after one of its driverless cars struck and killed a pedestrian in Arizona earlier this year.)

Einride plans to introduce the T-log to public roads in 2020. Falck expects a single truck to cost about $100,000, and though he wouldn’t name names he said that several “major global companies” have already expressed interest.