As European startups try to gain a competitive edge against the U.S. and China, there has been a big push to promote “deep tech.” And recent years have indeed seen a surge in European startups developing products based on scientific breakthroughs.

But it looks like the pandemic has put a dent in that momentum, at least for now. According to the latest State of European Tech report, funding for deep tech in Europe fell from $10.2 billion last year to $8.9 billion in 2020.

The report is produced annually by venture capital firm Atomico in partnership with Slush, Orrick, and Silicon Valley Bank. And its analysis is one of the region’s most closely watched barometers of entrepreneurship. 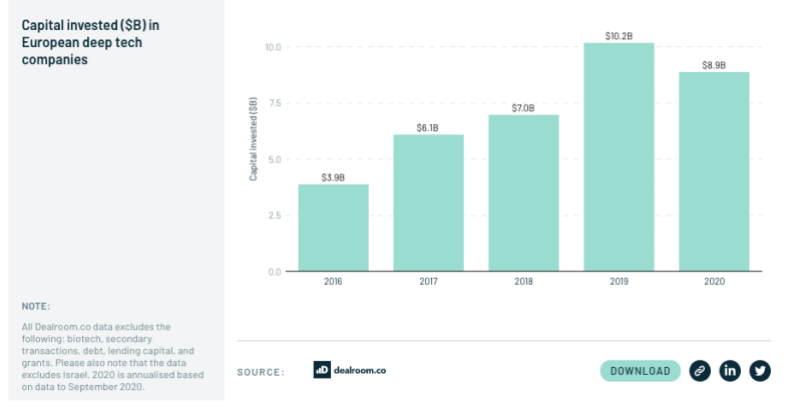 Above: The State of European Tech 2020

Overall, the news for Europe was good. The report projects that European startups will raise $41 billion in 2020, just eclipsing the $40.6 billion raised last year. And the continent is continuing to attract more investment from the U.S., a trend that actually seemed to get a boost from the pandemic as venture capitalists grew more comfortable making long-distance investments, according to the report.

Still, while Europe held the line on fundraising, North America continued to race ahead. The report projects that North American startups will raise $141 billion this year, up from $116.6 billion last year.

Europe is counting on its strength in technologies such as AI, machine learning, and quantum computing to give rise to a new generation of startups that could become giants of the next generation of computing. The European Union and many European countries have been making big investments in these areas in hopes of accelerating such efforts.

Since 2016, European companies spanning these categories have collectively raised more than $36 billion. It’s a notable achievement, but not sufficient if Europe is going to make a claim to leadership in these areas.

The report doesn’t offer any analysis as to why investors turned away from these areas in Europe. Whether it’s a pause due to the pandemic or a more fundamental shortfall remains to be seen. But it will no doubt catch the attention of policymakers who have been trying to stop the flow of talent and ideas out of Europe to other regions.