It is an issue that the retail industry doesn’t talk about in great detail, but shrinkage — loss of inventory at checkout through non-scans and other errors — costs $45.2 billion annually.

Today, Everseen — an AI software company founded in Cork, Ireland that detects non-scans at checkout — has announced the close of a total of $12 million in funding, raised over the last seven years, to help solve this problem through the use of AI and camera technology. The funds will be used to expand operations, including to a newly established New York City office that serves as the headquarters for the company’s U.S. operations.

Everseen’s AI technology is currently being used by five of the world’s 10 largest retailers. It integrates with security cameras that sit over both staffed registers and self-checkout machines and automatically detects non-scans. When a product is left unscanned, Everseen sends an alert — a notification that includes an image of the non-scanned item — to the retail stores’ security teams via smartwatch, tablet, or any other mobile device. Whether it was caused by a simple mistake, a scanning issue (which happens at self checkouts all the time), or an attempt at theft, the alert allows staff to deal with the problem quickly.

That is important, because traditional methods of dealing with shrinkage focus on assessing past activities rather than targeting losses in real time.

“Historically, the only way retailers could understand what was happening at checkout was by retroactively data mining their point of sale data and trying to parse through it to create a narrative around their loss and how it influences overall gross margin,” Alan O’Herlihy, CEO and founder at Everseen, told me. “This approach is a waste of time and leaves too much room for error. It also doesn’t prevent theft and human error, and definitely doesn’t give retailers information that would inform other operational issues that they don’t realize track back to error/loss at checkout.”

So how is AI powering this application?

“Our AI software integrates directly into stores’ existing cameras and, from day one, understands the ‘DNA of a transaction’, meaning that it also knows when it’s seeing something that isn’t a transaction,” O’Herlihy said. “The AI becomes smarter over time, learning the specifics of each individual store it’s in (spatial layout, shopping patterns, etc.) and being able to identify inconsistencies specific to that store’s checkout space. The AI does this by taking the CCTV video data (25 frames per second) and POS Stream Data (time-stamped to the millisecond) and classifying each action and event that occurs at the checkout position. Then our algorithms get to work, detecting nearly everything.”

That understanding goes beyond real-time alerts to give retailers actionable data for the future. 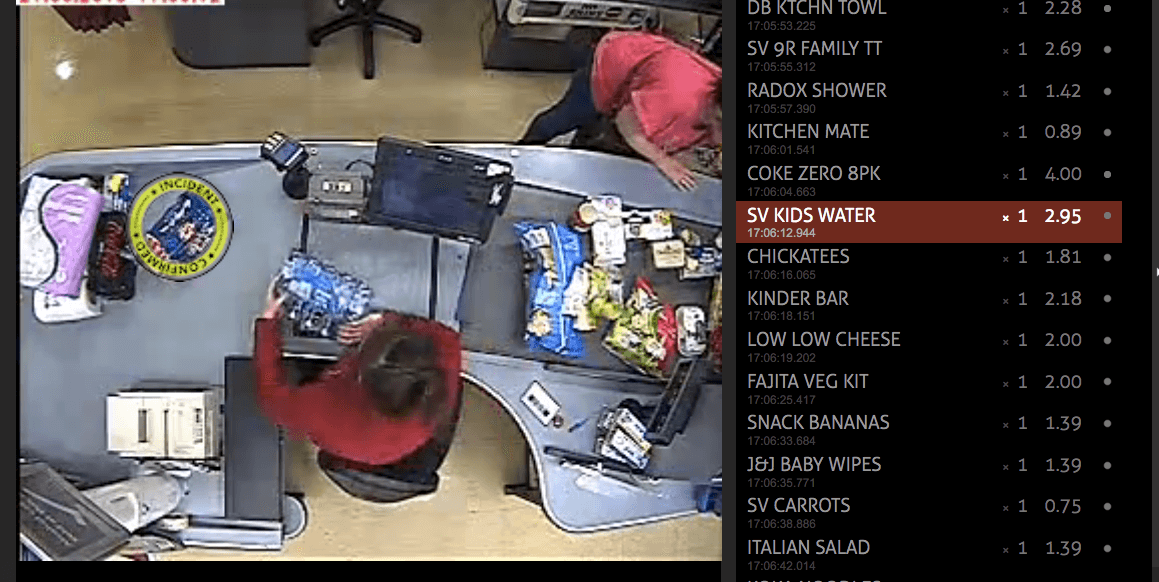 “Now that retailers have access to POS data that’s paired with information about loss incidents, they’re able to determine all the various sources of loss and how they affect their operations as a whole,” O’Herlihy said.

Of course, AI in retail applications has been dominated by chatbots and smart mirrors. Why has Everseen focused on using AI technology for customer and cashier errors?

“I think one of the reasons that chatbots are getting a lot of attention in retail at the moment is because people can relate to them,” O’Herlihy said. “They’re an accessible, customer-facing application that isn’t so far off from other familiar day-to-day interactions they have. I’ve seen products that let you walk around a shop and talk to your phone and ask it questions. We think this is cool, but it’s not going to stop products from walking out of retailers’ stores.”

So while futuristic AI is at the core of the solution, the problem is deeply personal to O’Herlihy and is based on traditional retail issues.

“I grew up the son of a grocer in Ireland and spent my whole youth working in the family store, so my personal story ties into why Everseen chose to use its AI technology to address theft and customer/cashier error,” O’Herlihy said. “Our store experienced so much loss over the years that we even joke that one of our cashiers built a house with the money they stole. But the methods of tracking the loss were so cumbersome that it just became something you accepted, not something you ever actually solved.

The funds won’t just be used for expansion into the U.S. Everseen will also focus on the future of retail and what can be done to make the consumer experience better, while eliminating shrinkage.

“AI and machine learning are the rocket fuel that is enabling us to disrupt the retail industry,” O’Herlihy said. “Our next step is to eliminate physical checkouts altogether, beginning with the introduction of checkout-free shopping (similar to Amazon Go) for major retailers worldwide. We have a patent pending for a virtual manager system that will enable our checkout-free shopping technology (0Line), and will make it a reality for retailers. Because we’re retailer-agnostic, without conflicting consumer interests (like Amazon or Facebook, or Google, for that matter), we believe we’re in a strong position to lead the retail world into this new phase.”

0Line will provide retailers with video cameras and sensors. It will then integrate with inventory, POS, and customer data. That allows the system to identify products as consumers remove items from shelves and to automatically charge them upon leaving the store, along with sending an itemized receipt. It sounds like the perfect retail solution, but it isn’t without issues.

“The goal is to eliminate legacy technology such as self checkouts,” O’Herlihy said. “It has been a real challenge to integrate our technology with antiquated technology like this.”

With the current goal of beating the $45.2 billion shrinkage problem and future intentions to change retail forever, Everseen is applying AI to retail environments that goes beyond the current crop of chatbots and online-to-offline applications, and that’s refreshing to see.