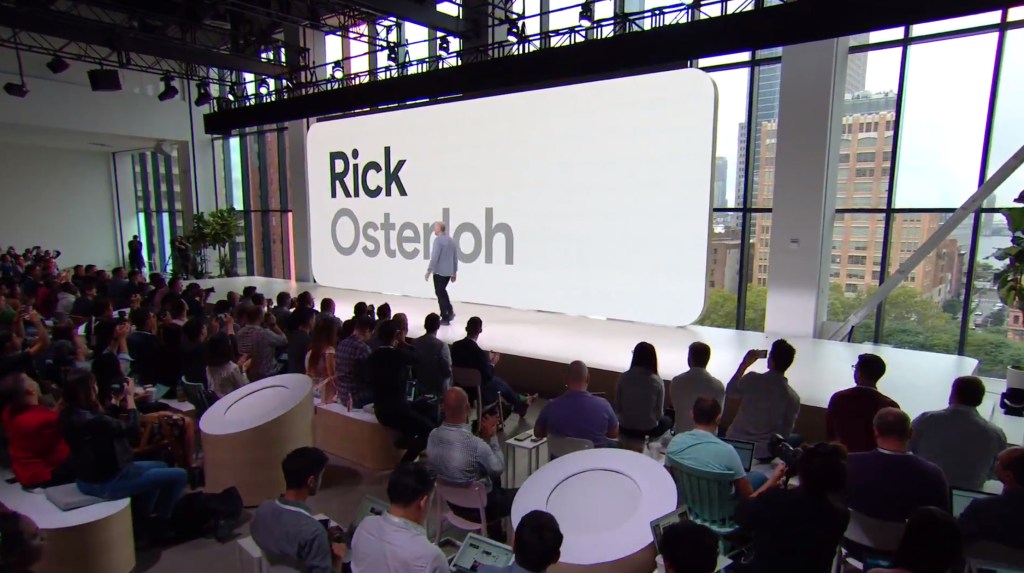 Above: Hardware chief Rick Osterloh takes to the stage at the 2018 Made by Google event in New York.

In truth, we already knew more or less what to expect — as is commonplace now with most high-profile technology events, much of the news actually leaked in the weeks and days leading up to today’s event.

Still, with proceedings now concluded, we now know much more about all the phones, tablets, laptops, hubs, accessories, and more Google will soon push to market. Here’s a quick recap of everything Google announced at its 2018 Made By Google event. Very much as expected, Google unveiled not one but two Pixel-branded smartphones. The Pixel 3 and Pixel 3 XL were both produced by HTC, and they bear some resemblances to the previous generation models launched last year — you can read all about the full differences here.

The Pixel 3 sports a smaller OLED screen at 5.5-inches, while the Pixel 3 XL offers a 6.3-inch screen. And both devices pack Qualcomm’s Snapdragon 845 system-on-chip, the very same chip that ships in Samsung’s Galaxy Note 9, in addition to 4GB of RAM and 64GB or 128GB storage options.

Interestingly, Google also demonstrated the Google Camera app offering real-time analysis via its Google Lens image recognition smarts. This means that Pixel 3 phones can now suggest actions based on what the Camera app sees. For example, if you point the camera at a URL, it understands what this is and may suggest that you wish to visit that website. Additionally, Google added a new Playground mode to the Pixel camera, which enables you to bring characters such as superheroes into a scene, while animated stickers can flicker around you as though they were with you in the real world. 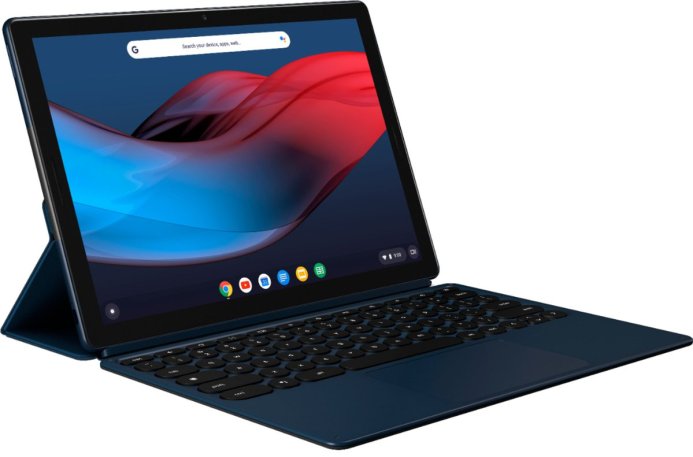 With a nice screen, quality cameras, and a hybrid build that allows you to use this Chrome OS device in tablet form or as a laptop via a separate detachable keyboard, Google is pitching the Pixel Slate as a premium device that can be used for work or play.

Prices vary from $599 all the way up to $1,599 depending on your chipset, storage, and memory configurations.

Again, the Home Hub came as little surprise due to big leaks in the build-up to today’s event in New York.

In a nutshell, Home Hub is a 7-inch smart display that converses with Google Assistant, while giving users a visual interface to control their smart home and access things like their calendar and photos using just their voice. This is designed to be the command center for your smart home, with anyone able to use it.

Home Hub preorders kick off today, with availability in retail stores expected on October 22 in the U.S., U.K., and Australia. It will cost a fairly reasonable $149.

Charger and mount: The Pixel Stand

Above: Pixel 3 on Pixel Stand

Costing $79, the Pixel Stand is a charger and mount for its new Pixel 3 smartphones, and is designed to help users find information quickly and interact more easily with the Google Assistant. Indeed, when positioned in the Pixel Stand, the phone can display relevant information such as reminders, alarms, messages, and calendar appointments. In some ways, it transforms the Pixel 3 into something akin to the Home Hub, except on a smaller scale.

The Pixel Stand can be preordered today. 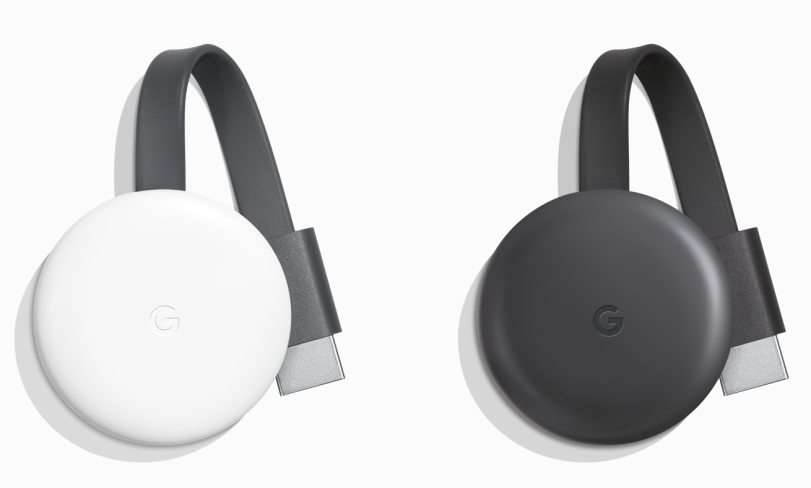 Google also unveiled a third-generation Chromecast, featuring 1080p streaming at 60 frames per second. It more or less looks the same as its predecessor, except it promises an upgraded Wi-Fi antenna with faster 5GHz performance.

The new Chromecast is available to buy today for $35.

Aside from the headline-grabbing hardware reveals, a number of software-related announcements were also made at the Made by Google event in New York today.

Back in May, Google announced a new AI-powered Smart Compose feature for Gmail — it basically helps users formulate their messages from beginning to end by making content suggestions as they type.

Up until now, it has only been available through Gmail on the web, but it will also soon be arriving in the Gmail mobile app starting on the Pixel 3 and Pixel 3 XL handsets. Additionally, Smart Compose will be expanded beyond English and into Spanish, French, Italian, and Portuguese.

Google first unveiled its controversial AI-powered Duplex at its I/O developer’s conference in May — Duplex is a bot that is capable of holding conversations on your behalf through your telephone.

It was controversial for a number of reasons, but chiefly because it pretends to be a human while calling up to make hairdresser appointments on your behalf. And such scenarios may soon be commonplace, as Duplex is coming to Pixel 3 smartphones from November 1.

The Google Home app, which is designed to help you control all your Google-y home devices, is also getting an overhaul.

The upgrade means that you can now control all your smart devices from a single place in one view, without needing to switch between apps. You can view your various devices by room, while you can also use Google Assistant directly from within Google Home, meaning you can tap the mic button and ask to turn your music down or dim the lights.

This is actually a pretty neat new addition to Google Photos for those who like to share photos with friends and family.

With Live Albums, you can choose to automatically share photos of specific people as you take the photo. So if you want all your baby photos to be made available instantly to your spouse, parents, or best friend, you can do so — any album can be transformed into a live album, and you can control who has access to it.

Live albums will be available on Android, iOS, and the web.