At its annual developer conference this week, one thing was clear: Facebook wants to be seen as a privacy-focused platform. As laughable as that may seem to some, it’s a message the company started really pushing back in March. And with F8 2019 now out of the way, we’re going to see the social network giant double down on efforts to align itself with privacy, both in terms of user experience and behind the scenes.

With that in mind, Zuckerberg outlined six core principles that he plans to embed across the company’s products: private interactions, encryption, reducing permanence, safety, interoperability, and secure data storage.

After F8, we now know that default end-to-end encryption is coming to Messenger and Instagram, much like the setup that already exists within WhatsApp. But the biggest reveal — though not a complete bolt out of the blue — is that people will soon be able to send messages to each other across Facebook’s three core messaging services: WhatsApp, Messenger, and Instagram.

Many other tidbits emerged from the two-day gathering in San Jose — after all, this event wasn’t exclusively aimed at privacy advocates.

Here we take a brief look back at all the major announcements to emerge from F8 2019. 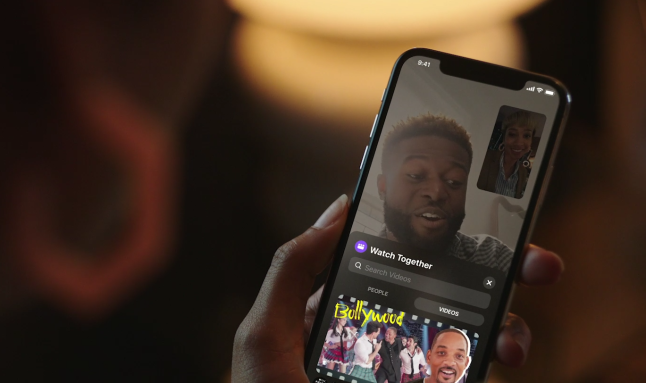 Ahead of the event’s official start, Facebook — accidentally, it seems — detailed some major upcoming updates to its Messenger app. This will include a new “watch together” social feature that lets Facebook users enjoy the same videos simultaneously, even while separated by continents. And there will be a bigger focus on connecting with close friends.

The company also highlighted a new desktop Messenger app that’s coming up later this year, in addition to Project LightSpeed — a lightweight Messenger app built atop “an entirely new code base.”

Elsewhere, Facebook announced a new appointment-booking feature for the Messenger bot platform. Available for Messenger’s 300,000 bots, the new tool could help accelerate the adoption of bots among the 40 million businesses that use Messenger to communicate with their customers.

Instagram is now looking like one of Facebook’s best pieces of business, after it bought the photo-sharing network for $1 billion seven years ago.

In even bigger news, Mosseri also revealed a new pilot Instagram is kicking off in Canada this week that will hide the total number of Likes received by photos and videos from public view. It’s similar to something Twitter is also dabbling with on its social network, with the idea of shifting attention away from popularity to focus on the quality of the content itself. 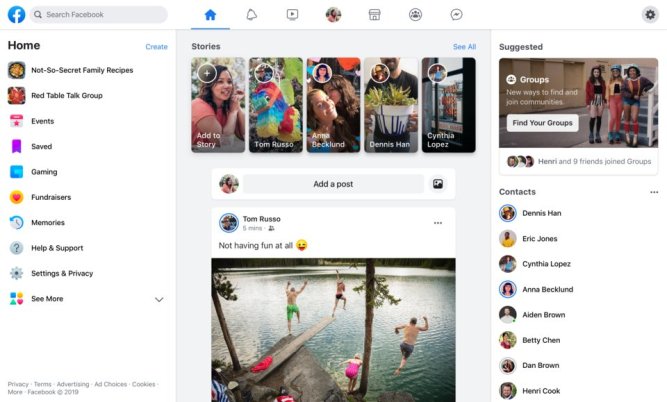 Amidst all the hullabaloo around VR, privacy, and interoperability, it’s easy to forget about Facebook’s bread-and-butter social network.

At F8 2019, Mark Zuckerberg announced that a big design overhaul is coming to Facebook’s web and mobile apps, one he called “the biggest change to the app and website in the last five years.”

The revamp is designed to make it easier to find and connect with relevant Facebook Groups and Events, with improved suggestions, browsing, and discovery tools. The redesign will be landing in the U.S. soon, with other regions following in the coming months.

Facebook expanded into dating last year, and at this year’s F8 the company revealed that Facebook Dating is landing in 14 new countries — though it’s still limited to Asia and Latin America. Those who can access Facebook Dating will also now be able to use a new “secret crush” feature that connects two people who have privately expressed lust for each other.

Other notable Facebook-specific news to emerge from F8 this year included a redesign of Workplace by Facebook — the enterprise version of Facebook — that will place more focus on chat, News Feed, and groups. A new Notifications tab has also been added to the mix and is designed as an inbox for all mentions relevant to you or your department.

Finally, Facebook’s Craigslist-like Marketplace will soon enable sellers to ship their items anywhere in the U.S., while buyers will be able to pay for goods directly inside Facebook.

Messaging apps got their share of attention at F8 this year, and that included WhatsApp. Facebook announced a new software development kit (SDK) that developers can use to integrate WhatsApp verification into Account Kit for iOS and Android — essentially, this means third-party apps can now give new users the option to use WhatsApp to receive verification codes when signing up. 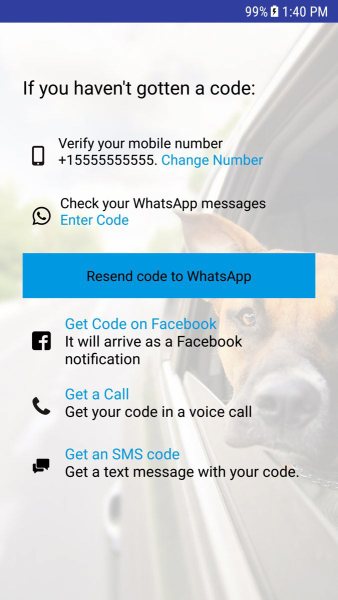 Facebook also teased a new tool called Product Catalog, which will allow WhatsApp users to see what products are available from companies that participate in WhatsApp Business later this year.

The final piece of WhatsApp news was related to Facebook’s Portal smart display. Mark Zuckerberg revealed that Portal will soon support WhatsApp video calls, and all video calls through Portal will come with end-to-end encryption.

Related to this, Facebook announced that Portal will soon be expanding beyond the U.S., starting with Canada and followed by Europe later this year. 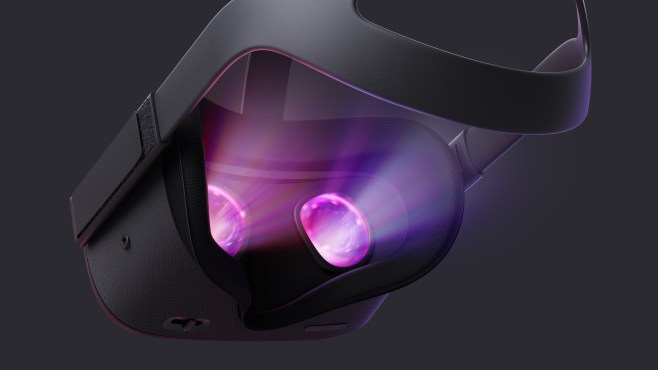 Facebook subsidiary Oculus opened preorders for Quest and Rift S VR headsets — with shipping kicking off on May 21 and 53 games available at launch.

GamesBeat said in its review that the Oculus Quest “addresses everything that’s wrong with PC and mobile virtual reality” by cutting cords and placing sensors on the device. And our interview with Oculus’ director of content ecosystem, Chris Pruett, made it clear what Quest buyers should expect in terms of power, positioning, and value.

In the augmented reality (AR) sphere, Mark Zuckerberg announced on stage at F8 2019 that Facebook’s Spark AR Studio app creation platform will finally offer support for Windows, in addition to other new features, with plans to open Instagram to the entire Spark AR creator and developer ecosystem later this year.

Elsewhere, Ronald Mallet, a researcher at Facebook Reality Labs, discussed how Facebook is building safety and empathy into its AR/VR avatars and shared spaces.

Artificial intelligence (AI) is increasingly becoming the cornerstone of just about every modern industry, and Facebook has been at the forefront of many cutting-edge developments over the past few years.

With that in mind, Facebook used F8 2019 to announce a new machine learning experimentation tool called Ax, which helps AI developers experiment with adjusting things like learning rates and dropouts to see which approaches produce the most effective AI models.

Ax sits on top of deep learning framework PyTorch, which Facebook uses internally to power AI services such as PyText. At F8 2019, Facebook launched PyTorch 1.1 with support for TensorBoard.

Elsewhere on the AI front, Facebook outlined progress it has made in using AI to combat abuse and bias across the platform — including fighting election interference, the spread of misinformation, and hate speech.