While we had some idea of what to expect from Microsoft Build 2019, the annual conference delivered a number of notable announcements for developers, companies, and consumers alike, spanning artificial intelligence (AI), cloud computing, Kubernetes, and — yes — Internet Explorer. But the less said about HoloLens, the better.

Here, we take a quick look back at everything Microsoft announced on day one of the Seattle event.

Microsoft had a few nuggets in store for developers on the Windows platform. One of the most notable reveals was Windows Terminal, a new application for command-line users that promises “graphics-processing-unit-accelerated text rendering,” as well as a new version of Windows Subsystem for Linux (WSL), both of which are coming next month. 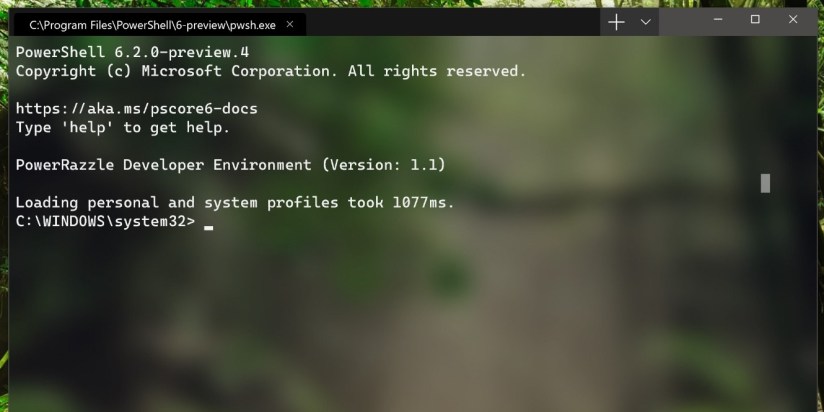 Above: Windows 10 is getting a Windows Terminal

Other news that will be of particular interest to developers includes a new version of Visual Studio — Microsoft’s integrated development environment (IDE) — which will soon offer a browser-based companion tool, as well as new features for remote workers.

Meanwhile, Microsoft announced that notable upgrades are coming to its code-free business apps building platform PowerApps and its broader Power BI business analytics service. And the company announced that Microsoft Search, its cross-domain search tool, and Microsoft Graph, a unified programmability model with accompanying APIs that provide access to data within Microsoft’s cloud products, including Office 365, are now rolling out to all users after a short preview period.

This was the first Build conference since Microsoft completed a $7.5 billion acquisition of code-hosting repository GitHub back in October. As such, Microsoft revealed that developers will now be able to sign into Azure with their GitHub credentials — with GitHub integration, developers can transition seamlessly from their repositories to deployment.

At Build 2019, Microsoft also took the wraps off Fluid Framework, a new web-based model and platform for document creation. According to the company, Fluid Framework enables content from the web and from inside apps to be modularized into movable, customizable components. And because it’s based in the cloud, it supports co-authoring from multiple people.

Finally, Microsoft’s developer conference traditionally reveals at least one new open source project — at Build 2019, the biggest reveal on that front was Quantum Development Kit, which will open up quantum computing to more developers by allowing them to run experiments and create their own quantum computing programs. The Quantum Development Kit will be arriving on GitHub in the summer.

Microsoft used Build 2019 to showcase some of the AI smarts it has been working on, and ahead of the conference the company outlined to VentureBeat how it is using AI to improve accessibility for people with disabilities.

At the Build event itself, Microsoft revealed that it’s developing a toolkit for AI and robotics, and the platform’s first component will involve creating a program for building intelligent agents that can autonomously run physical systems.

During the main keynote, headed up by CEO Satya Nadella, Microsoft also revealed a slew of updates for Microsoft 365, its cloud-based lineup of productivity software that includes Office. One of the standout facets was a new feature the company calls Ideas in Word, an AI-powered grammar and style checker in Word that uses natural language processing (NLP) and machine learning to suggest improvements to human-written documents.

Above: Microsoft Ideas in Word

Finally, Cheetah Mobile was given some AI airtime at Build 2019, with the Chinese technology firm showing off the global version of CM Translator, a portable AI translation device that has already proven popular in China. As you’d perhaps expect, given its promotion at Build, CM Translator is powered by Microsoft’s AI-infused Azure Cognitive Services.

Back in December, Microsoft announced that it was embracing Google’s Chromium open source project for its own Edge desktop browser — the first Chromium builds for Windows 10 started rolling out last month. At Build 2019 yesterday, Microsoft announced that the Chromium-powered Edge will be getting a special Internet Explorer (IE) mode, new privacy tools, and a feature called “collections” that uses what the company calls “cloud-powered intelligence” to collect and organize content you find while browsing.

Microsoft also used Build 2019 to introduce new tools aimed at helping political parties and governments combat interference. One of those tools was ElectionGuard, an open source SDK that enables officials to conduct random audits of election results. Another was M365 for Campaigns, which — for $5 per user per month — will be offered to U.S. federal election campaign candidates and committees to help improve their email security.

And finally, a small but interesting gaming-related nugget emerged from Build 2019. Nadella announced on stage that Microsoft had partnered with publisher Gameloft to bring Xbox Live features to some of its mobile games — just a couple of months after Microsoft announced that the full Xbox Live experience would be arriving on iOS and Android games.