This year has also been a big year for Amazon on the consumer AI front, coming out of a strong 2016 holiday season for the Echo combined with the very recent release of the Echo Look and the beta release of the Echo Show. Surely all eyes will be on how much Amazon sells on this year’s Prime Day compared to those of the previous two years, but three other key results to watch from Prime Day 2017 are vital to Amazon’s AI ambitions.

Last year’s Prime Day was the biggest sales day ever for the Echo, with sales up 2.5x compared to the day prior. Prime Day 2016 built momentum for Echo sales going into the 2016 holiday season; it was a harbinger for what was to come a few months later. 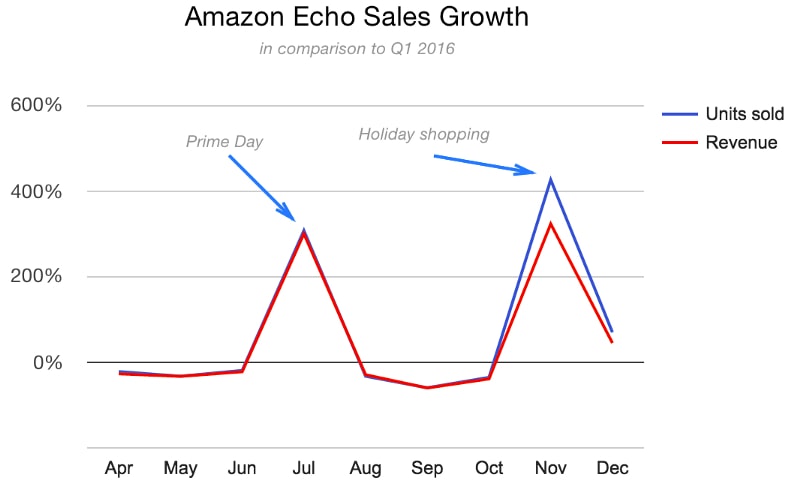 Amazon officially released the Echo Show to the public on June 28. Retailing at $229.99, the Echo Show is Amazon’s most expensive home assistant yet compared to the $179.99 Echo and the $49.99 Echo Dot. With a 7-inch touchscreen, the Echo Show provides new capabilities such as watching videos on YouTube, video calling another Echo Show, and acting as a photo album display. However, there are mixed reviews about the Echo Show, with some experts saying that the Echo Show isn’t revolutionary enough to warrant upgrading from the original Echo.

Prime Day will be telling for the Echo Show, which was publicly released less than two weeks before Prime Day. Because Amazon will inevitably push it with a large discount, it will not only be interesting to see how well the new and more expensive Echo Show sells but also interesting to see how many existing Echo owners upgrade to the Echo Show. A recent consumer survey shows that 87 percent of current Echo owners plan to upgrade to the Echo Show for reasons such as wanting to have the latest technology and wanting to have the 7-inch screen. On the other hand, 22 percent of people who don’t already own an Echo are interested in buying an Echo Show.

The Echo Show’s sales performance on Prime Day will help Amazon get a sense of how the newly released member of the Echo family will do during this year’s holiday season with both existing and new Echo customers. The results could shape how Amazon approaches the months leading up to the holiday season.

Last year, Amazon unveiled several Echo-exclusive deals and gave $10 off on orders over $20 placed through voice, but the result was a mere 80,000 voice orders that day. This year, Amazon is pushing a more aggressive agenda: It will unveil over 100 Echo-exclusive deals and will give any first-time voice shopper $10 to try it out, as well as enter all voice shoppers into a $5,000 sweepstake. This is all despite the fact that voice shopping hasn’t really seemed to take off, according to a recent consumer survey. Over 50 percent of consumers aren’t interested in voice shopping due to lack of trust or inconvenience from not having a screen (on the original Echo).

However, perhaps this sentiment will change after Echo users try voice shopping for the first time this Prime Day. Pushing voice shopping is clearly important for Amazon and widely understood to be its main end goal for the Echo family. We’ll see if its aggressive tactics this year will be more successful in persuading Echo users to try it out. It would also be interesting to see how much more Echo Show users voice shop (given the addition of the new screen) compared to Echo users.

Amazon recently launched the Echo Look in beta, which acts as an AI outfit stylist that takes selfies and videos, gives clothing recommendations, and rates looks using ML algorithms. Amazon also recently launched Prime Wardrobe in beta, a service that lets Prime members pick 3 to 15 items of clothing and try them on for free at home before purchasing the items (with a discount if you purchase above a certain number). Apparel has seemed to become one of Amazon’s new focuses, as apparel’s share of all digital spend for Amazon has grown for the three consecutive years, from 15.4 percent in 2013 to 17 percent in 2016. Amazon has been adding more popular apparel brands to Prime, such as Nike at the end of June, and its private fashion lines grew 26 percent in Q4 2016. By the end of 2017, Amazon is expected to surpass Macy’s to become the biggest apparel seller.

But despite this, apparel sales on Prime Day 2016 were quite flat compared to the rest of Amazon’s business. For example, with less than two hours remaining, the 12 clothing deals with the largest discounts had only sold 28 percent, and only 13 men’s and six women’s deals had been 100 percent claimed out of 1,300 clothing and fashion deals. Some chalked up the flat apparel sales to checkout problems, but the real reason may have to do with how Amazon customers shop for apparel (discount) deals differently than how they shop for other categories.

Amazon hasn’t released apparel deals for this year’s Prime Day yet, but it’s worth keeping an eye out to see how apparel sales fare this year. The Echo Look represents a sizable belief in apparel as part of Amazon’s overall consumer AI strategy and is likely predicted to be synergistic with apparel sales. The more Amazon can continue growing its apparel sales and build up a reputation for selling apparel beyond just basics, the more impactful the Echo Look will be when it’s released publicly.

So as Prime Day approaches next week, beyond potentially breaking another general sales day record, there are other key results that are important to Amazon’s consumer AI ambitions. But certainly, it will be an exciting day for both consumers and Amazon itself.