French robotics startup Exotec has raised $90 million in a round of funding led by London-based VC firm 83North.

Founded out of Lille in 2015, Exotec develops autonomous industrial robots called Skypods that can move horizontally and vertically, and travel at speeds of up to 9mph. The robots constitute part of a “goods-to-person” picking system designed to improve productivity and reduce strain and physical exertion in human warehouse workers.

Ecommerce has boomed in 2020 due in large part to COVID-19, with online merchants seeing a 42% year-on-year increase in sales last month in the U.S. alone — data suggests that the global pandemic has led to an extra $107 billion in online sales since March. This surge in demand is good news for companies such as Exotec, which specialize in equipping large warehouses with the tools to pick and pack orders at scale. 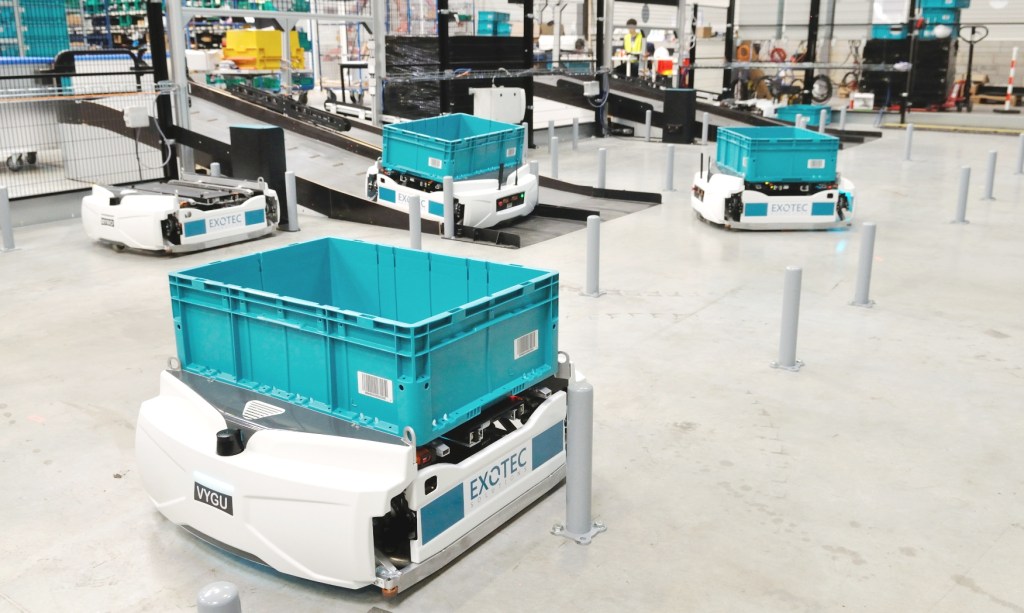 The Skypod system comprises four core components. The battery-powered robots use laser scanners to detect obstacles, and can move horizontally along the ground and vertically, enabling them to reach goods stored high up. The storage racks themselves are also part of Exotec’s system, designed to house inventory at up to 32 feet high. 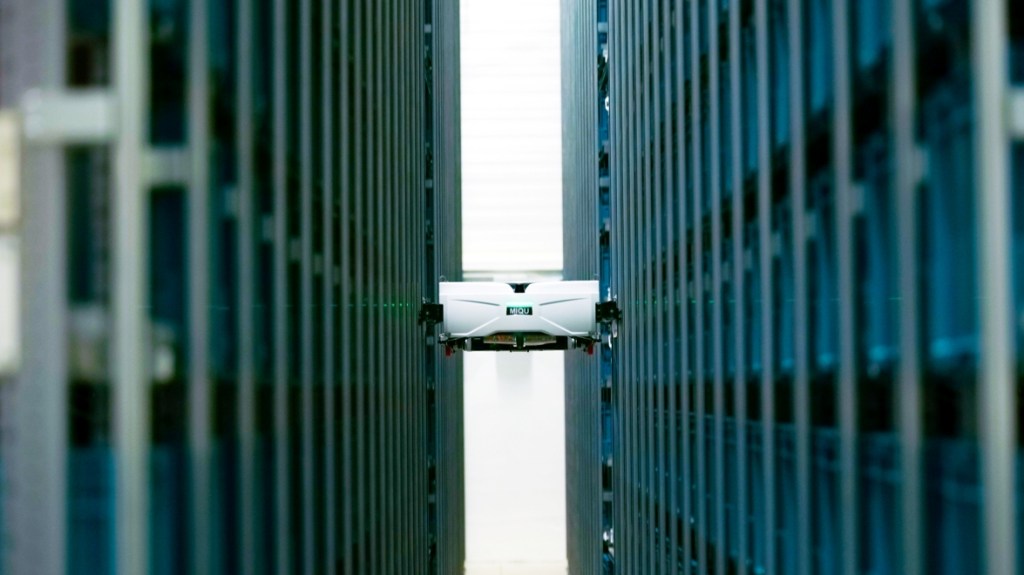 Above: Exotec: Move on up

Then there is the Exotec workstations, where (human) operators receive the inventory orders picked by the Skypod robots. Underpinning this is the fourth component: software that serves as the “air traffic controller,” instructing the Skypod robots where to go to collect the goods for each order. 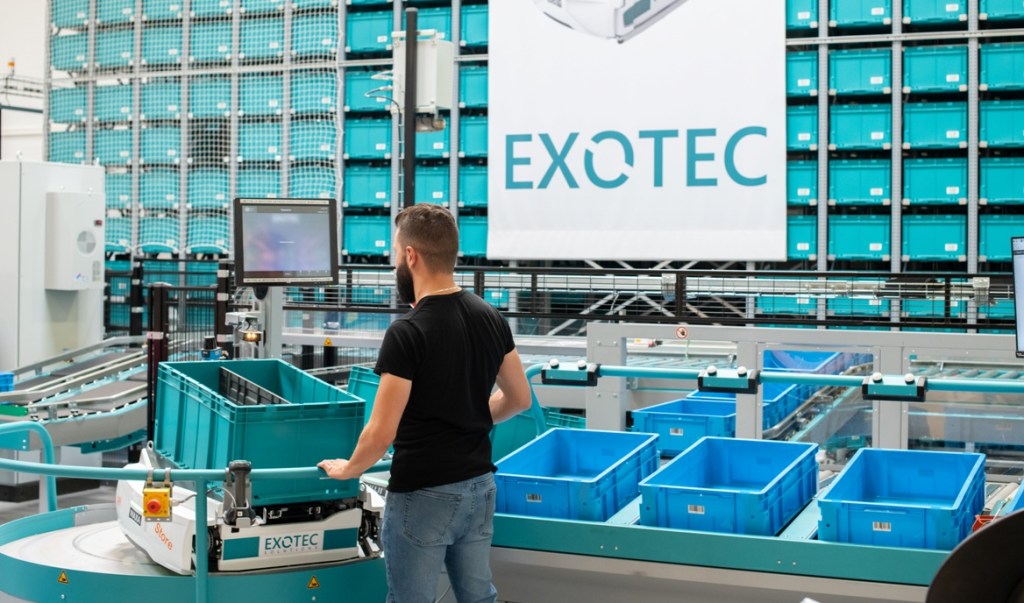 While the hardware (the robots) are what help reduce physical exertion for humans, it’s the software algorithms that do the mental gymnastics, figuring out the best route and sequence to minimize the time required to complete an order.

Industrial robots were an attractive proposition for investors even before COVID-19, with the likes of Berkshire Grey securing $263 million back in January. And the mighty Amazon has long invested in warehouse automation technologies, having acquired Kiva Systems back in 2012 to create a subsidiary now called Amazon Robotics.

There are 2.7 million industrial robots now in use in factories around the world, according to data from the International Federation of Robotics (IFR). Nearly 10% of these operate in the U.S., with the broader North American market representing the second largest operational stock of industrial robots globally after China. So it’s clear that the U.S. presents a golden opportunity for Exotec as it looks to bring automation to more fulfillment hubs across the country.

Exotec debuted its Skypod system at a French warehouse back in 2017, and in the intervening years it has amassed an impressive roster of clients including French retail giant Carrefour and European Amazon rival Cdiscount. As with others in the ecommerce space, Exotec has noted an uptick in interest for its robotics system during the COVID-19 crisis — without divulging specific numbers, Exotec said that it has doubled its revenue this year, while its headcount has also doubled to 190 employees globally.

“As the pandemic continues, massive uncertainty about the future of retail and ecommerce remains,” Exotec CEO and cofounder Romain Moulin told VentureBeat. “Many of our customers and prospects are laser-focused on how to scale their ecommerce fulfillment operations to keep up with consumer demand. Supply chain leaders are looking for new ways to maximize operational efficiency especially since warehouse labor and fulfillment center capacity is limited. Some of our systems have doubled their throughput during the lockdown, and we see that there is still a 30% growth of ecommerce throughput compared to last year.” 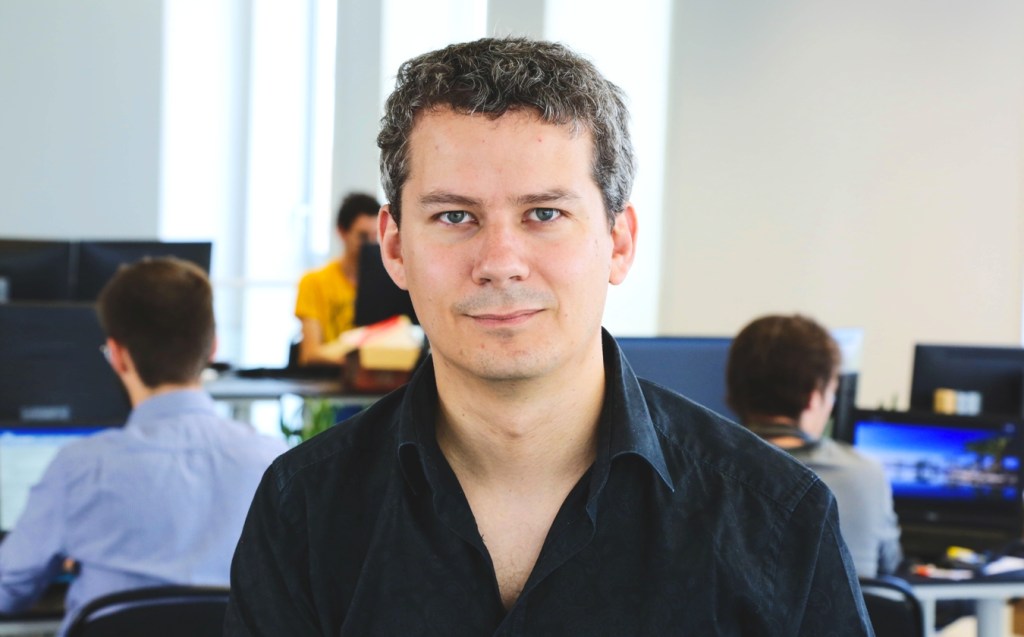 Prior to now, Exotec had raised around $21 million, and with another $90 million in the bank from investors including Dell Technologies Capital, Iris Capital, and Breega, it said that it plans to scale its operations across the U.S. and Japan. Indeed, Exotec expanded to the U.S. last year, launching a local subsidiary and partnering with fulfillment and distribution company AHS, which has started installing the technology already. Exotec also opened its first U.S. office in May in Atlanta, and has opened another hub in Tokyo.

Although the discussion around robotics and automation often centers on its negative impact on jobs, the reality is that such technologies can lead to completely new types of jobs, or even change existing jobs so that they are open to a broader range of people.

“We believe warehouse automation, particularly goods-to-person systems, has the potential to make logistics roles more appealing and ergonomic,” Moulin added. “It can save operators from walking 10-plus miles a day, reducing fatigue and risks associated with pedestrian traffic in the warehouse. We also find that operators are more engaged and excited to work with cutting edge technologies and automated systems.”