Facebook Messenger now has a plugin that lets visitors to a website engage in live chat with a human or bot without leaving that website. Called Customer Chat, the plugin is one in a series of major changes announced today as part of the release of version 2.2 of the Messenger Platform. The announcement was made by Messenger head of product Stan Chudnovsky on stage at Web Summit in Lisbon, Portugal.

Things like Message Us buttons or a Send to Messenger plugin have been available for websites for a long time, but this appears to be the first native offering for live chat with a human or automated bot.

Customer Chat will be available on desktop and mobile devices and is currently in closed beta. Since the conversations sync, a conversation can begin on a website and continue on Messenger. Early users include airlines like KLM, Volaris, and Air France. This continues Facebook’s efforts to support the use case of airline passengers who have to change a flight or speak with a customer service agent ASAP. 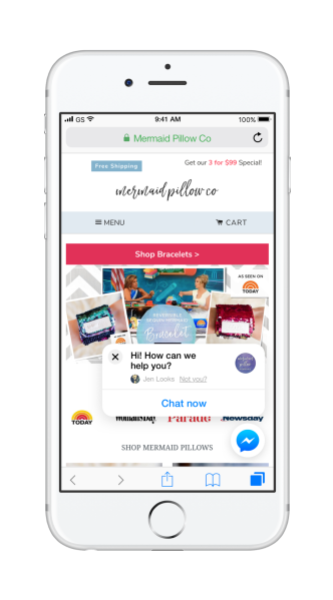 Bots deployed on a website can be programmed to perform a variety of jobs, such as delivering order status updates, scheduling an appointment, answering common user questions, and providing automated services during the hours when a business is closed.

Other major new features arriving with version 2.2 include built-in NLP in 10 new languages and the opening of betas for the Broadcast API and Handover Protocol.

Custom NLP can also be integrated with a Wit.ai token.

The release of version 2.2 comes a day after Salesforce announced plans to launch a bot platform for customers next year. The Customer Chat plugin brings Facebook closer in features to companies like [24]7, LivePerson, and others who provide live chat clients for conversations that take place within an app or website.

Version 2.0 of Messenger Platform launched at F8 in April and brought with it new ways to discover third-party bots, including chat extensions; the Discover drawer for featured bots; and M Suggestions for bot recommendations from Facebook’s intelligent assistant M.

Handover protocol was initially made available in April, but today it was expanded worldwide.