Beta versions of subscription messages and News Feed ads for Messenger have been available since August and September respectively. A public release and slow rollout of both features begins this week.

The combination of sponsored messages and News Feed ads will increase the value companies receive from their bots, wrote Messenger VP David Marcus in a blog post today.

Subscription messages can vary in appearance, from product placement by a brand to an upsell or additional sale offer by a vendor to a daily news digest from a publisher. Ads will take a person away from the Facebook app and into the Messenger app to speak to a bot. 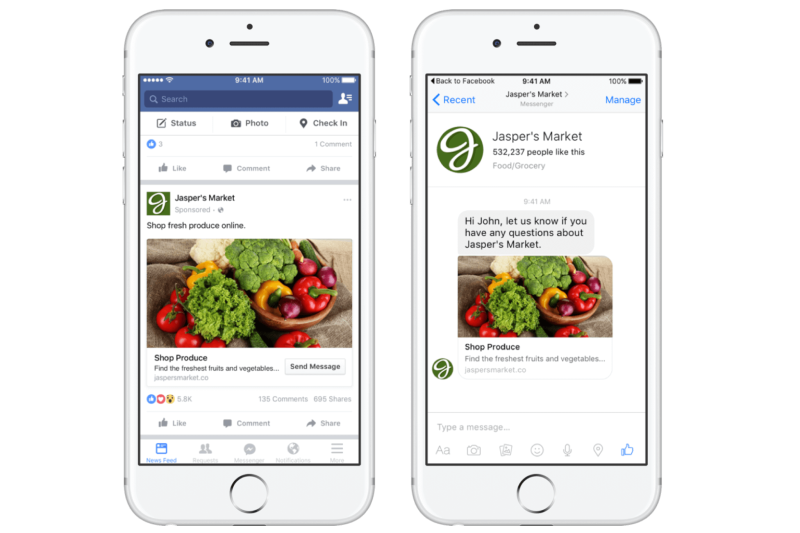 Above: When a user taps or clicks a Facebook Messenger News Feed ad, it takes them out of the Facebook app and into the Messenger app to speak with a bot

Also coming to Messenger this week: list templates. These are bots that operate the same way as other Messenger bots but are compiled in a list.

But sponsored messages are not going to become the modern-day equivalent of pop-up ads, Marcus said.

“Of course, people using Messenger shouldn’t worry about getting spammed, because the starting principles still remain: Businesses can’t send a sponsored message to threads that weren’t previously opened by their customers or prospects, and users have full control to block messages or people/businesses they no longer want to hear from,” Marcus wrote in the blog post.

Version 1.3 of the Messenger Platform also launched today, bringing with it:

Messenger users may also find it easier to locate bots when a search query is performed.

Facebook has added several new features to its Messenger platform since its launch in April.

Menus, buttons, cards, and carousels became available in June. A payments beta to allow the completion of transactions without leaving the app launched in September. While virtually every chat app platform has come to adopt buttons, cards, and similar features, Messenger remains one of the only apps that allows payments within the app itself.

Customer service, promotion, and subscription experiments underway at Messenger include those by Zendesk, Salesforce, The Wall Street Journal, and platforms like Pullstring and Msg.ai, Marcus wrote.