Considering that bots have only been on Facebook Messenger for a year, it can be tough to define the core companies that make up this ecosystem. But Facebook gave it a shot at this year’s F8 developer conference.

(The bot ecosystem, broadly defined, encompasses all the developers and companies that build on platforms like Facebook Messenger.)

During a session titled “How to build a great bot,” Facebook shared the external players that the Messenger platform — with 1.2 billion monthly active users — looks to for growth of the ecosystem. The list of 26 companies includes bot making machines like Octane.ai, Flow.xo, and Chatfuel, as well as large existing customer service chat companies like LivePerson. Companies that make bots for other companies can also be found on the list, including Assist, maker of the Fandango bot, and Conversable, which makes the Whole Foods Messenger bot.

Others include Sequel, which creates personas and stories with bots (like detective murder mysteries) and a bot for fans of Justin Bieber. PullString also has a bot creation platform and has made a series of high-profile bots, including Lt. Reyes, a Call of Duty bot that racked up six million interactions in its first 24 hours.

Heading into F8, Facebook was facing criticism for what some called a disappointing first year for Messenger bots. To address developers’ primary concern, Facebook announced a series of improvements for the discovery of bots on Messenger.

The launch of Messenger Platform 2.0 on Tuesday brought several changes to the chat app. The new Discovery tab is a dedicated area for popular and featured bots and ways to chat with nearby businesses or larger businesses like Verizon, UPS, and Target. Facebook is also testing the incorporation of Delivery.com into suggested replies from intelligent assistant M. The suggested replies from M feature made its debut on the platform earlier this month. 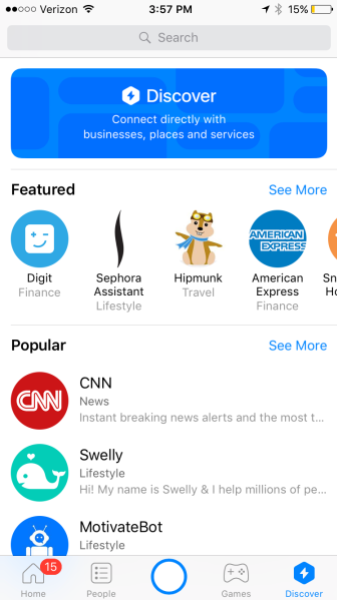 Chat extensions were introduced to bring bots into single chat threads or groups. Prior to the change, Messenger was one of the few chat platforms that didn’t allow bots in groups. However, bots in groups will not be allowed to record conversations or use any natural language processing, a change that continues to move Messenger bots away from natural language processing.

QR codes that can be used to share a specific bot or website also made their debut. You no longer need to use the scan code area of the Messenger app for the camera. Just hold your thumb over a code to snap it.

The bot discovery drawer that has been around since last year and recommends 20 different bots has returned, after malfunctioning in the weeks prior to F8.

On Tuesday, Facebook also announced that it will work with five bot making platforms to create bots for Workplace by Facebook and its enterprise Messenger counterpart, Work Chat. Bot platforms that will work with Facebook include Converse, PullString, The Bot Platform, Kore.ai, and Avaamo.

During his keynote address Wednesday, CTO Mike Schroepfer talked about the role of natural language processing on the Facebook platform and asserted that bots should be able to answer more questions that tap into social intelligence. He also talked about Dr. Wiki, a bot Facebook is making that’s being trained to answer questions based on facts from Wikipedia.