Lidar — sensors that measure the distance to objects by illuminating them with light and measuring the reflected pulses — are the cornerstone of autonomous car systems from Waymo, Uber, and dozens of others. But they’re susceptible to interference from inclement weather, darkness, fog, smoke, haze, and sun glare, which is why Wilsonville, Oregon-based Flir is advancing an alternative: thermal vision.

At the 2019 Consumer Electronics Show in Las Vegas this week, Flir announced its next-generation thermal vision Automotive Development Kit (ADK) for the development of self-driving cars. The IP67-rated, USB-and-ethernet-touting hardware pairs a wide-angle lens with the firm’s in-house Boson camera core, which captures 640 x 512-resolution data from the far infrared portion of the electromagnetic spectrum. Thanks to proprietary machine learning algorithms, the ADK is able to detect objects up to 200 meters away, Flir says.

“For automated decision-making on the roadway, thermal imaging cameras coupled with machine-learning capabilities provide the most effective method for pedestrian detection to save lives, particularly in cluttered environments or [with] poor visibility,” Jim Cannon, Flir’s president and CEO, said in a statement. “Furthermore, the FLIR thermal-enhanced autonomous test vehicle demonstrates how thermal cameras can significantly improve urban, highway, and AEB performance and the overall safety of self-driving cars.” 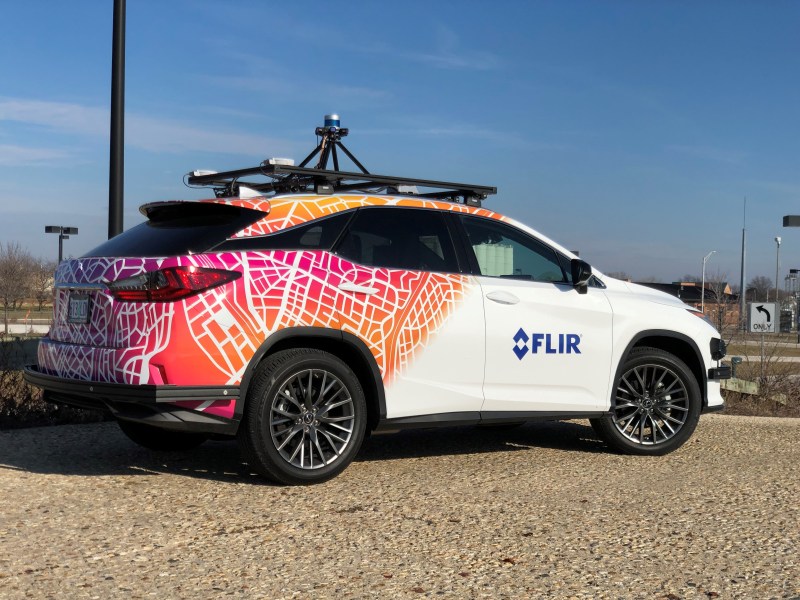 In addition to the new ADK, Flir unveiled what it claims is an industry first: a commercial test car with multiple Flir ADK cameras that together provide a 360-degree street view. It’s equipped with thermal camera-enhanced automatic emergency breaking — a demonstration, Flir says, of the ways thermal imaging data can enhance the robustness of driverless vehicles.

Flir also took the wraps off the eponymous Flir TG275, its first dedicated thermal camera purpose-built for automotive and home mechanics. The company says the TG275’s embedded Flir Lepton thermal micro camera can detect the presence of heat in car components where it might indicate an issue. It can then extract high-contrast details from images captured by an onboard RGB camera and superimpose them on the thermal images.

Flir, which was founded in 1978 and has more than 3,500 employees, says more than 500,000 of its thermal sensors are built into the driver warning systems from General Motors, BMW, Audi, Mercedes-Benz, and Volkswagen. In October, it debuted the Firefly, a development camera that taps Intel’s Movidius Myiad 2 for on-camera object detection. In June, it released an open source dataset of 10,000 infrared light images to jump-start development of autonomous car systems. And in September 2017, it announced its first VGA sensor designed for self-driving cars.