France’s aggressive push to develop its AI ecosystem seems to be paying dividends as the number of startups continues to soar.

A new report released today identified 432 AI-related startups in France, up from 312 last year and 180 back in 2016. The report was produced by Roland Berger, a global consulting firm, and France Digitale, an association that represents venture capitalist and entrepreneurs.

The report was released on the eve of the 4th annual France is AI conference that is being held Wednesday at the Station F startup campus in Paris.

The AI startups are working across industries such as big data analysis, retail, health care, and customer support. The authors of the report say the latest numbers are evidence that France is now rivaling traditional European AI hubs such as the U.K. and Israel.

Just as impressive as the number of startups is the amount of venture capital they have raised. For the first six months of 2019, French AI startups raised $634 million, compared to $621 million for the U.K. and $452 million for Israel, according to the report. That’s in part thanks to mega-rounds raised by French companies such as Meero, an AI photography platform that raised a $230 million round last summer.

“What is quite surprising is that the startups are increasingly well funded,” Brien said. “Only three years ago, it was quite a pain in the ass to raise money for deep tech startups.” 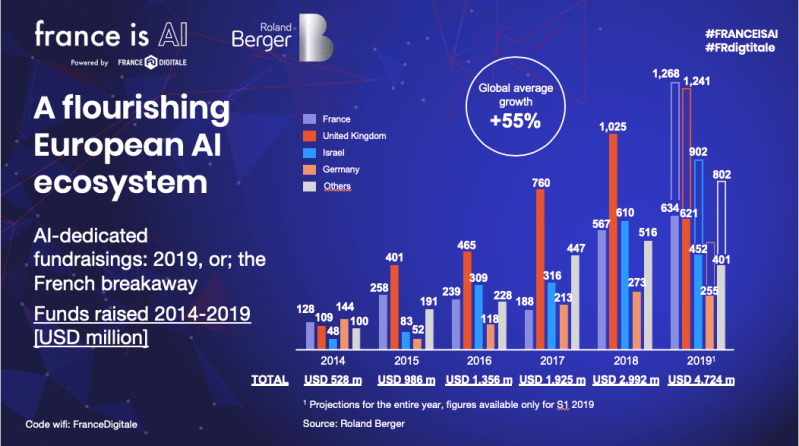 AI is one of the critical technologies that the French government identified several years ago as essential for boosting the country’s economy while also ensuring it wouldn’t be reliant on tech superpowers such as the U.S. and China. Last year, the French government released a study called “AI for Humanity” that sought to outline the challenges and opportunities the emerging technology would present, as well as strategies for developing the sector.

The new France Digitale report says that on a global basis, the U.S., China, and U.K. still dominate in terms of patent applications and published research. In Europe, the U.K. still sets the R&D standard with 623 AI-related patents.

But Brien was heartened by the fact that a growing number of these startups have links to the academic world, either through hiring researchers or partnerships. While such fluid relationships have long been commonplace in Silicon Valley, in France academics have traditionally shunned commercial endeavors, a resistance the government has been trying to ease to speed the transfer of IP into enterprises.

“We see that the barrier that used to occur between the research world and the startup world is shrinking,” Brien said. “And that’s very promising. France has the largest concentration of AI research labs in Europe. And that’s translating into startups.”

The new report also points to challenges that remain. Those include the looming, if muddled, Brexit. Brien noted that France and the U.K. have a host of intertwined AI relationships involving sharing data, research, and partnerships. Like so much else about Brexit, these face a great deal of uncertainty.

And while funding has progressed, France is still a place where a large number of startups raise small early rounds and then struggle to find larger, later-stage investments. That said, the growth in AI funding was driven by larger series B and C rounds, according to the report.

Recently, French president Emmanuel Macron announced plans for a $5.5 billion investment fund with money coming from pools of insurance funds that will target larger, later-stage rounds. Brien is also anticipating that the European Investment Fund, the largest source of funds for European venture capital firms, will soon be increasing its funding with a focus on AI and deep tech.

The other areas still lagging are exits and more robust strategies by France’s largest companies. In some ways, those two are related. Brien would like to see those companies not just investing, but also acquiring those AI startups to help the big incumbents transform their businesses.

“We need to see more acquisitions,” Brien said. “This is a wakeup call for the French corporate world. Having investments in AI startups is fine, but that’s not a strategy. They need to really change their approach to AI startups if they want to absorb all that knowledge.”

Correction: An earlier version of this post said that for the time period 2014 to 2019, French AI startups raised $1.268 billion, compared to $1.241 billion for the U.K. and $902 million for Israel based on information provided by France Digitale. The correct figure is that for the first six months of 2019, French AI startups raised $634 million, compared to $621 million for the U.K. and $452 million for Israel, according to the report. We regret the error.