As COVID-19 continues to bolster the global delivery and logistics market, warehouse robotics startup Geek+ today announced it has extended its series C funding round to $200 million, up from $150 million in July 2019. The company says the deal, which closed earlier this year, will support expansion of its robot-as-a-service program and its relationships with technology and ecosystem partners.

Worker shortages caused by the pandemic have prompted some retailer, fulfillment, and logistics companies to accelerate the rollout of mobile robots. Gap more than tripled the number of item-picking machines it uses to 106, while Amazon says it’s relying more heavily on automation for product sorting. According to ABI Research, more than 4 million commercial robots will be installed in over 50,000 warehouses around the world by 2025, up from just under 4,000 warehouses in 2018.

Geek+, which was founded in 2015, develops a range of AI-imbued logistics robots addressing scenarios in warehouses, factories, and sorting centers. The company claims its line of picking robots can autonomously carry thousands of pounds and says its “smart factory” system — which replaces traditional conveyor-belt-style assembly line setups — can almost double production capacity through a combination of internet of things devices, 5G, edge computing, and real-time computer vision. 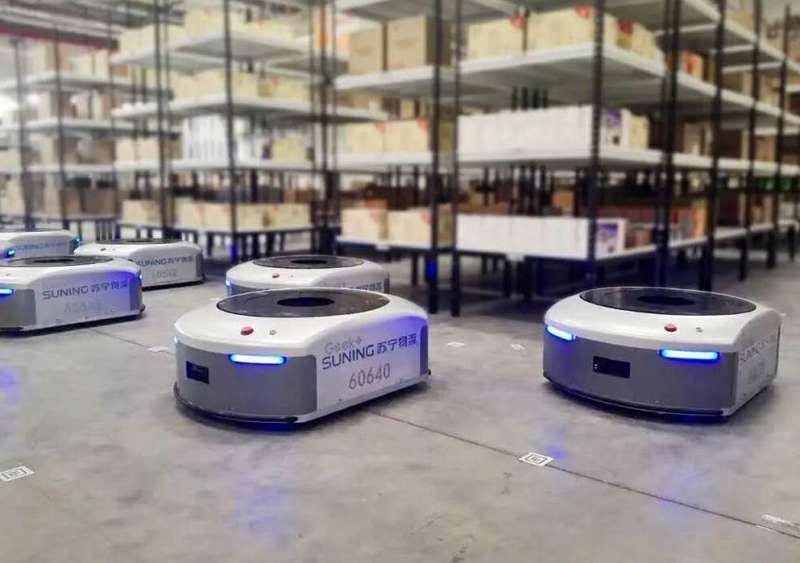 Geek+ also supplies the planning software that drives its autonomous robots, most of which use lidar, collision sensors, RGB cameras, visual simultaneous localization, and mapping technologies to navigate factory floors. Algorithms facilitate things like order grouping and finding box sizes according to a product’s weight and measurements by mining and analyzing historical data. The robots also move inventory to easy-to-reach places within warehouses and factories based on predicted demand:

The Beijing-based startup’s funding extension comes after it brought its warehouse robots to the U.S. via a partnership with North American order fulfillment and distribution center system integrator Conveyco. Geek+ recently worked with Walmart to deploy robots in the retailer’s Shenzhen distribution center, improving picking efficiency by a claimed 3.5 times. It also installed dozens of picking robots in Dell’s Xiamen spare parts warehouse and Decathlon’s Kunshan warehouse to reduce the need for on-site operators. And in Japan, it teamed up with Nike to enable same-day delivery in the Greater Tokyo area.

Geek+ says it has over 300 customers (including Alibaba and Suning) which together have deployed more than 10,000 of its robots in over 20 countries.

This latest “C2” funding round, which was led by V Fund with participation from Redview Capital and Vertex Ventures, brings Geek+’s total raised to nearly $390 million with a reported post-money valuation of $2 billion. (GGV Capital, D1 Capital Partners, and Warburg Pincus contributed to last year’s C1.) In addition to its Beijing headquarters, the 800-employee company has offices in Germany, the U.K., the U.S., Japan, Hong Kong, and Singapore