In late 2016, the White House published a report titled Artificial Intelligence, Automation, and the Economy. It’s a solid work of research and forecasting that proposes equally solid policy recommendations. Here’s part of the framing, from the report’s intro:

AI-driven automation will continue to create wealth and expand the American economy in the coming years, but, while many will benefit, that growth will not be costless and will be accompanied by changes in the skills that workers need to succeed in the economy, and structural changes in the economy. Aggressive policy action will be needed to help Americans who are disadvantaged by these changes and to ensure that the enormous benefits of AI and automation are developed by and available to all.

This cuts right to the chase: Artificial intelligence will create wealth and replace jobs. AI will change the future of work and the economy.

Revisiting this report made me wonder if similar policy research exists in Germany and at the European level. A quick search online brought up bits and pieces. I found things like Merkel arguing for bundling know-how for AI as well as evidence of her acknowledgment of low spending on AI in Europe and mentions of her demand for transparency in algorithms. However, there doesn’t seem to be an overarching guiding policy. I actually asked federal government spokesperson Steffen Seibert on Twitter, but so far he hasn’t responded. Which is fair.

Germany has a mixed track record of tech policy

For the record, in other areas, Germany is making good progress. Take autonomous driving, for example. Germany just adopted an action plan on automated driving that regulates key points of how autonomous vehicles should behave on the street — and regulates it well. Key points include that autonomous driving is worth promoting because it causes fewer accidents; dictates that damage to property must take precedence over personal injury (that is, life has priority); and that in unavoidable accident situations, there may not be any discrimination between individuals based on age, gender, and so on. It even includes data sovereignty for drivers. Well done!

On the other hand, Germany squandered opportunities for the Internet of Things. The nation has framed IoT as almost exclusively industrial IoT under the banner of Industrie 4.0. This is understandable given Germany’s manufacturing-focused economy, but it excludes a huge amount of super interesting and promising IoT. It’s clearly the result of successful lobbying but at the expense at a more inclusive, diverse portfolio of opportunities.

So where do we stand with artificial intelligence in Germany? Honestly, in terms of policy, I cannot tell.

AI and the future of work

The White House AI report talks a lot about the future of work, and of employment specifically. This makes sense as it’s one of the key changes AI may bring. Some others might be the opportunity for the creation of wealth on one side and algorithmic discrimination on the other.

How AI will impact the workforce, the economy, and the role of the individual is something we can only speculate about today.

In a recent workshop with stipendiaries of the Heinrich Böll Foundation on the future of work, we explored how digital, AI, IoT, and adjacent technologies affect how we work and how we think about work. It was particularly interesting to see this diverse group of very capable students and young professionals attempt to wrap their heads around the complexities in this space. Their findings mirrored what experts across the field also have been finding — there are no simple answers, and we’ll most likely see huge gains in some areas and huge losses in others.

The one thing I’d say is a safe bet is that like all automation before, depending on the context, we’ll see AI either displace human workers or increase their productivity. In other words, some human workers will be super-powered by AI (and related technologies), whereas others will fall by the wayside.

Over on Ribbonfarm, Venkatesh Rao phrases this very elegantly. He says that future jobs will either be placed above or below the API. He also says, “You either tell robots what to do or are told by robots what to do.” This thought conjures up images of roboticized warehouses, like this one:

Just to be clear, this is a contemporary warehouse in China. Amazon runs similar operations. This isn’t the future — it’s the well-established present.

I’d like to stress that I don’t think a robot warehouse is inherently good or bad. It depends on the policies that make sure the humans in the picture do well.

So where are we in Europe again? In Germany, we still try to define what IoT and AI mean. China is far ahead of us in the innovation of these technologies. The nation has clearly defined and implemented IoT and AI for years. An example of this progression is the image below. It shows a smart lamp in Shenzhen that we found in a maker space. 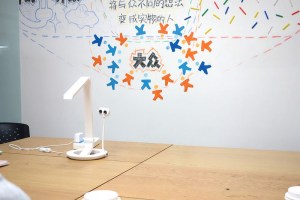 What does the lamp do? It tracks if users are nearby, so it can switch itself off when nobody’s around. It automatically adjusts the amount of light it emits depending on the amount of surrounding light in the room. As smart lamps go, these features are OK — not completely lame, but not particularly interesting either. If a product like this came out of Samsung, LG, or Amazon, I wouldn’t be impressed. So what makes it special? This smart lamp was built by a group of three fifth graders. That’s right, 10 and 11-year-olds designed, programmed, and built this lamp. They were able to build the lamp because the curriculum for local students in China includes skills that enable them to create technologies like this. In Europe, this is unheard of.

I think the gap in skills regarding artificial intelligence is most likely quite similar. And I’m not just talking about the average individual. I’m talking about readiness at the government level, too. Our governments aren’t ready for AI.

It’s about time we start getting ready for AI, IoT, and robotics. Always a fast mover, Estonia is considering a law to legalize AI, and it smartly kicked off this process with a multi-stakeholder process.

In Germany, the whole discussion is still in its earliest stages. Let’s not fall into the same trap as we did for IoT. Both IoT and AI are more than just industries. They are both broader and deeper than the adjective “industrial” implies.

The White House report can provide some inspiration, especially around education policy.

We need to invest in what OECD calls the active labor market policies: i.e., training and skill development for adults. We need to update our school curricula to prepare our youth for the future with both hands-on applicable skills (coding, data analysis, etc.) and the larger contextual meta-skills to make smart decisions (humanities, history, deep learning).

We need to reform immigration to allow for the best talent to come to Europe more easily (and allow for voting rights, too, because nobody feels at home where they pay taxes with no representation).

Zooming out to the really big picture, we need to start completely reforming our social security systems for an AI world that might not deliver full employment ever again. This could include universal basic income, or maybe  universal basic services, or a different approach altogether.

A lot of the logistics on how AI integration will play out in Germany’s workforce is still unknown, but I know one thing: We need to kick off this process today.

Peter Bihr is the founder and managing director of The Waving Cat, a boutique strategy, research, and foresight company.