To create more dynamic experiences, starting today developers can customize the way their action looks on televisions, mobile devices, and the smart touch displays with Google Assistant inside that are due out this summer. Customizations can be made through the Actions on Google console. 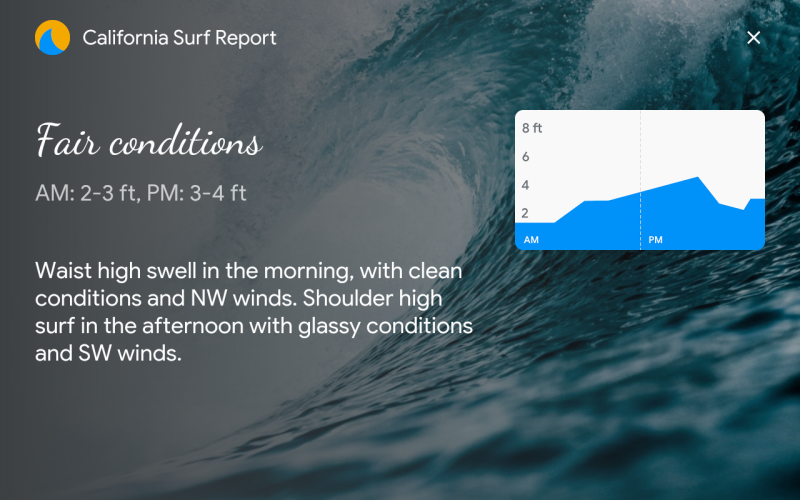 To build the conversational AI behind Google Assistant (and its search engine), Google spent years working to understand exactly what a user wants to accomplish based on the words they use. People can find hundreds of different ways to reach the same thing, something developers working with conversational interfaces must take into account.

The taxonomy of intents is being mapped by Google and shared with developers through a new feature called built-in intents to improve how their voice apps understand the words people use.

Routine suggestions are also due out later this year. First introduced in March, routines allow people using Google Assistant to carry out multiple tasks with a single utterance. For example, say “OK Google, I’m home” and you can turn on the lights, start a podcast, and hear your reminders. Custom routines were introduced for users today, as were Routine suggestions.

“After somebody engages with your action, you can prompt them to add your action to their routine with just a couple of taps,” Abrams said.

Another feature added today for voice app developers is Action links, a URL to share a voice app anywhere on the web. When a user clicks the link, it brings them into an experience with the developer’s voice app inside Google Assistant. Each app’s link can be found in the Actions on Google console, starting today.

Many features have been rolled out to support developers making voice apps for Google Assistant. To encourage the fledgling voice developer ecosystem, Google last week announced the opening of an investment fund to support voice AI startups like Pulse Labs and Edwin.

Google Assistant is now available in 16 languages. To spread the assistant’s voice experience around the world, VP Nick Fox said Google is committed to bringing Google Assistant to more than 30 languages by the end of 2018, a feat that would put it ahead of competitors like Alexa — which only speaks English, German, and Japanese today — and one that would put Google’s AI assistant in the hands of 95 percent of Android smartphone users.

Daily updates and push notifications for Actions on Google were first introduced this spring for a limited number of developers or partners. The delivery of notifications on Home smart speakers will be rolled out for developers in the coming months, a company spokesperson told VentureBeat.