Earlier this week at an event where about half a dozen new devices made their debut, Google introduced the Home Mini smart speaker to the world.

Since the holiday season is the number one time of the year to buy a smart speaker, Home Mini and Echo Dot sales will likely spike in the months to come. But which speaker is better?

Home Mini won’t be available in stores for another two weeks, but VentureBeat got ahold of one early. Here’s how the Home Mini and Echo Dot match up.

It’s not even close. Google Home Mini delivers much higher-quality sound. Music notes come through crisply with the Home Mini. By comparison, the Echo Dot sounds muffled. The same holds true for the human voice when listening to news on both devices.

Playing the two side by side makes it strikingly clear that with Echo Dot the sound comes out of a piece of plastic, while audio from Home Mini comes from a device whose entire face is a speaker.

Since music is one of the primary functions of a smart speaker, this edge in sound quality could be important as Amazon tries to fight off Google and almost every other major tech company in the world to keep its dominance in the smart speaker market. An eMarketer forecast released earlier this year found that Amazon and Google sit atop the smart speaker market, with Amazon accounting for more than 70 percent of smart speaker usage in 2017.

Google and Amazon want consumers to see the Echo Dot or Home Mini as remotes or small music players that interact with a bigger speaker in their line of products, like the Home or Echo — or if you want even bigger sound, the new Echo Plus or Home Max.

Of course, there are plenty of speakers available today to stream music that aren’t made by either Google or Amazon, but if the Home Mini and Echo Dot are intended to be part of a series of smart speakers in your home, like a gateway drug for the line of speakers with an AI assistant, Google gets an important win here.

After hearing the sound quality from both, I’d much rather have a handful of Home Minis scattered around my home than Echo Dots. You’re simply going to get better quality from Google’s low-end speaker than what Amazon has to offer.

Let’s hope the next generation of Echo Dots come with some of the sound quality Amazon says has imbued in the new Echo and Echo Plus.

Volume adjustment for both devices also differs. Whereas the Echo Dot has plus and minus buttons on top, for the Home Mini you touch the left side to lower volume and the right side to raise volume. Both buttons are invisible and sit directly across from the string of four LEDs atop the Home Mini. Hitting these buttons can be a little confusing at first because they don’t light up until you press them or use the “Hey, Google” command.

Of course, both the Echo Dot and Home Mini can be turned up just by asking them to raise the volume.

Google Home Mini has a microphone mute button and volume buttons on the side, but none are visible from the top view.

In contrast, the second generation Echo Dot comes with four buttons on the top of the device to mute the microphone, summon Alexa, or turn the volume up or down.

If the design goal is to be unobtrusive, Google Home Mini wins. On functional design, Echo Dot wins for ease of use. The Home Mini mute button blends into the side of the device, and as already mentioned, it can be a bit of a challenge at times to find those volume buttons on the side. 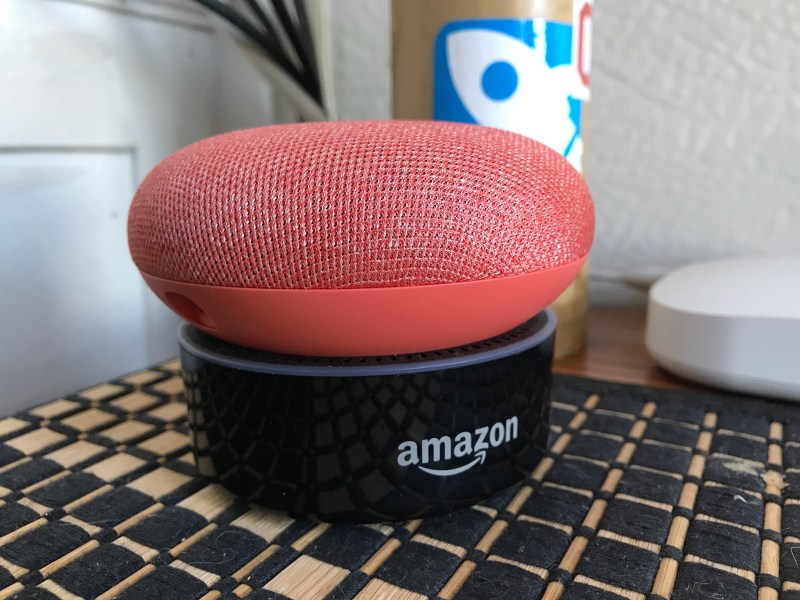 Above: The Google Home Mini (top) is just a teensy bit larger than the Amazon Echo Dot (bottom).

No difference here. The Home Mini and Echo Dot both sell for $49. Beyond the MSRP, the deciding factor may be the kinds of deals Google and Amazon strike. For example, Google will give away a Home Mini with every Pixel 2 or a free Google Home with a New York Times subscription. Amazon regularly discounts its Echo products on its website.

During the hardware event Wednesday, Google took a fairly obvious dig at Apple’s iPhone lineup. “Feel free to choose whichever size Pixel you prefer,” Google VP Mario Queiroz said onstage. “Because you’ll get the same great experience on both. We don’t set aside better features for the larger device.”

Apparently the same isn’t true when it comes to smart speakers.

When using the Echo or Echo Dot, the same pretty array of blue-green lights are illuminated any time you say “Alexa,” but the Home and Home Mini have different indicators to indicate they’re listening to you.

The Home comes with an array of blue, green, yellow, and red lights that blink as you speak to them and spin while it analyzes your words, while the Home Mini just has four white lights.

The circular array of blue-green you see when speaking with the Echo devices or the colored lights seen when speaking to Home are undeniably better than those four still, white dots.

In far-field voice recognition, both the Dot and the Mini seem to meet the needs of a bedroom or living room environment. With me standing 10 feet away and speaking in a normal voice and some slight street noise in the background, both did fine in hearing their wake word and commands.

These two devices have their shortcomings and advantages, but the biggest difference, other than sound quality, is the intelligent assistants that power the two of them.

Amazon can interact with Fire TV and Google with Chromecast. Both want to be your DJ. Both can answer your questions. Both can make free phone calls in the United States and Canada.

Both come with marketplaces to buy a broad assortment of things: Amazon.com sells just about everything, of course, and Google Express is now connected with some of the biggest retailers in the United States, including Target, Costco, and Home Depot.

As was proven by new features announced by Amazon and Google at their respective hardware events in the past week — things like the ability to carry out multiple tasks with a single utterance, activities for kids, and streaming live camera feeds to televisions — the tit-for-tat in the assistant wars means the two are often fairly evenly matched participants in an ongoing back and forth. There are few notable differences between the two.

One major plus for Google Assistant is its ability to recognize up to six unique voices per device, so each time someone says “Tell me about my day” or “Play my workout playlist,” Google knows who’s talking. Amazon also supports unique accounts for Alexa-enabled devices, but you have to switch to access different accounts. With Google, you just speak.

Amazon and Google have opened the door to third-party developers to make Alexa skills or Google Assistant actions, and here Amazon has a definite edge. While Google Assistant has hundreds of actions, Alexa now has more than 20,000.

But Google isn’t standing still, with new features added and coming soon to Google Assistant. Mini could have the edge soon in a few months.

Picking the best intelligent assistant likely depends on your needs and what new powers and functionality are added by Google, Amazon, and the third parties and partners they work with. But the hardware question is no contest.

Primarily due to sound quality and volume, when comparing Google and Amazon’s low-cost speakers, Home Mini is simply better than the Echo Dot.