Google’s very first pair of headphones for $159 began to reach customers who placed pre-orders this week, and we got a pair to test out their ability to translate 40 languages, play music, ping notifications in your ear, and power Google Assistant commands like ordering a pizza, getting directions, and searching Google.

All tests of the device took place with a Pixel 2 smartphone. Pixel Buds can be used with Android or iOS smartphones, but the Google Assistant features are only available for Android phones.

Pixel Buds first made their debut last month at Google’s largest hardware event of the year, held in San Francisco.

Translated conversation might be the single most anticipated feature for prospective Pixel Buds owners. To be clear, Google Assistant is already able to translate into more than 100 languages by simply saying “Hey Google, how do I say ‘I need to get to a hospital’ in Korean?,” but this is different.

As Google employees demonstrated onstage last month, with Pixel Buds, translations are spoken into your ear, while the language you want to communicate in is played through the speaker in your smartphone. At launch, translations are available in 40 languages, from Arabic to Vietnamese, but they can only be carried out with a Pixel 2 smartphone.

Translations require you to download the Google Translation app. Once that’s done, you just tap and hold the earbud and say “Help me speak Spanish,” por ejemplo, to launch Google Translate in Speech mode.

To have a conversation with someone in a different language, tap the mic button on your smartphone. Once they finish speaking, the translation will be spoken to you in your Pixel Buds. Translations end if you let your smartphone go to sleep.

This is a cool feature, but it’s not yet the Babel Fish. Most phrases longer than a sentence are cut off after about 5-7 seconds of translation. That’s about the same you can expect from any smartphone using the regular Google Translate app.

Whereas translation of a word or two can seem almost instant, longer translations take a few seconds to process. That’s not a whole lot in the grand scheme, but it could feel lengthy if you’re actually translating a conversation, not just a few sentences.

Translations can also be interrupted or incorrect when in noisy environments like a bus or city streets.

As a VB guest writer recently pointed out, Google Translate still gets stuck on cultural complexities. Any name that doesn’t seem common to Google Translate will likely be misinterpreted. And since translations are carried out in the cloud, they require an internet connection. If you’re traveling outside of your native country, you may not have a data connection.

Beyond the Babel Fish-like translation, Pixel Buds let you talk to Google Assistant and receive push notifications in your ears. Voice can also be used to add items to a shopping list, and create reminders delivered based on time or location.

To chat with Google Assistant, tap and hold the right earbud. You can do this to ask questions like “What’s the capital of Zaire?” or “What’s my next meeting?” or  “When’s my next flight?” or “When’s the next Warriors game?” The AI assistant can tell jokes on request or respond helpfully if a user says something like “Google, I don’t feel good.”

Pixel Buds can access Google Assistant voice apps to do things like make a reservation with OpenTable, check your heart rate with Google Fit, or control smart devices. This is really interesting, the concentration on carrying out basic tasks that involve spending money and interacting with businesses.

In other words, Pixel Buds can handle most things you can ask Google Assistant running on a smartphone or Google Home device — but not everything. For example, open Google Assistant on your phone and you can create a calendar event by asking, whereas tapping and holding Pixel Buds does not appear capable of creating a calendar event. Pixel Buds also appear unable to initiate the Now Playing feature to identify songs on a Pixel smartphone.

Take the “order a pizza” scenario often used by app developers. Say “I want to order a pizza” and Google Assistant will suggest you speak with Dom, Domino’s Pizza’s voice app. You have to set up an account and enter preorder information to complete your order. Google Assistant on Pixel Buds also falls short in being able to complete the task “I want to book a flight.”

Of course a voice app for Domino’s may not be necessary now that Google Assistant can make phone calls, but that won’t help you much when you’re trying to book a flight.

Giving users the ability to set easily which apps put a ping in your ear could greatly enhance the Pixel Buds experience. For example, it would be great to hear news headlines as they happen from one or two sources like AP or Reuters, but I don’t want to hear every news-related notification I receive in my ear. The same goes for social media updates and most other notifications that appear on a Pixel 2 lockscreen.

Notifications via Pixel Buds can be turned off when the smartphone paired with the earbuds is placed in Do Not Disturb mode.

Google Assistant also makes calling local businesses pretty easy. Tap and hold the right earbud to launch Google Assistant and say “Call Target” or your favorite nearby restaurant, and Google Assistant can help connect you. You can start with a basic query like “Where’s the nearest bakery?” and end with a phone call.

Yes, you can do this with any pair of headphones and most smartphones today, but doing this with voice only and an assistant already in your ear makes it just a little easier.

Ask the assistant and you can get walking directions wherever you want to go. You’ll hear the same navigation you would hear from Google Maps.

In a romp around downtown San Francisco Friday, Google Assistant was able to give quick walking directions to my destination. Just by hearing me say “I need to get to Target” or “I need to get to the nearest hospital,” Google Maps began a trip and started rattling off instructions. In the case of heading to a hotel downtown, spoken walking instructions were just as good as the kind you get from Google Maps normally, though it did tell me I arrived at my destination a block before I had. 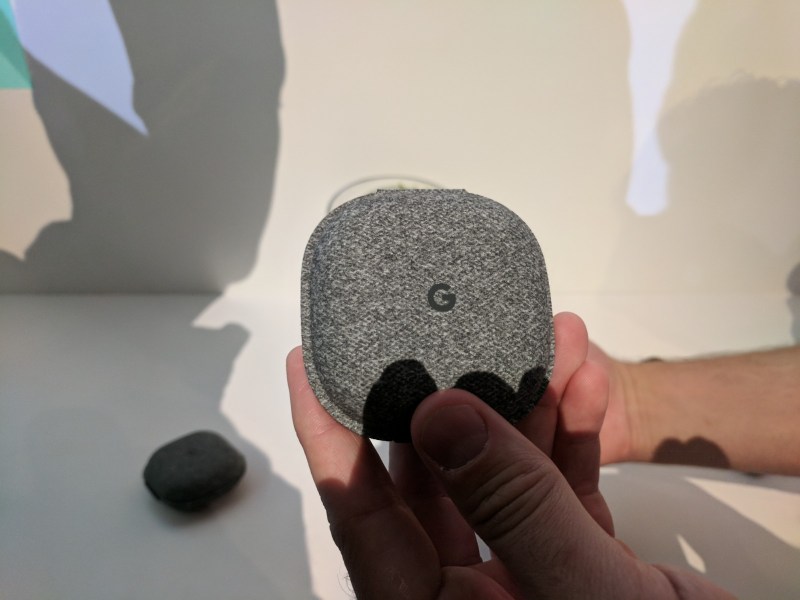 To quickly connect wireless headphones to an Android device, the earbuds utilize a new feature called Fast Pair, which Google first announced in late October. Pairing with the phone takes no more than 5 seconds, as opposed to the traditional route of going to settings and selecting a Bluetooth device. This helps Google compete with Apple’s AirPods, which have a feature called automatic ear detection that turns on sounds as soon as you put the buds in your ear.

For a device that packs so much intelligence, these are a relatively simple-looking pair of headphones, except for the cord connecting the earbuds that you sling along the back of your neck. If you’re the kind of person who likes wearing wireless neckband headphones already, this might not be a big deal to you. But if you’re someone who tends to wear more traditional earbuds or over-the-ear headphones, the design can take some getting used to.

A loop at each end of the cord between the two earbuds must be inserted into your ear. That can also take some getting used to, as can twisting the rope to fit into the carrying and charger case.

Volume is adjusted by swiping forward or backward on the right earbud. It’s nice to be able to control things like reminders without needing to look for your phone, but I found the volume output for Pixel Buds lacking in comparison to QC 35 II or a standard-issue pair of headphones. A ride on a bus or a walk down city streets lets in ample ambient sound.

As far as battery life goes, each charge of Pixel Buds delivers up to five hours of battery life. Pixel Buds are charged by placing them inside their charging case. Filling up the charging case via a USB-C cable takes 10 minutes and should store enough for multiple charges, giving the earbuds roughly 24 hours of listening time before the case needs to be plugged in again.

Google and Apple didn’t just get rid of the headphone jack in favor of USB-C — they also brought Pixel Buds and AirPods to market to encourage people who purchase high-end smartphones to buy their wireless headphones as well. Whether or not $150 is a good price for what they’re is selling is something you have to answer for yourself, but Pixel Buds are another step in Google’s march toward AI assistant dominance.

The form factor an AI assistant exists in matters. With wireless headphones, the tech giants that control the two largest smartphone operating systems are making the case for an assistant that can help us make transactions, get things done, and perhaps demonstrate a bit of personality.

Despite some shortcomings, Pixel Buds are a pretty powerful answer to AirPods, and a first move toward an AI assistant in your ear.