Watch out, ghostwriters: Artificial intelligence (AI) is coming for you. In a paper accepted at the NeurIPS 2018 conference in Montreal (“Content preserving text generation with attribute controls“), data scientists from the University of Michigan and Google Brain describe a machine learning architecture that’s capable of not only generating sentences from a given sample, but changing the mood, complexity, tense, or even voice of the original text while preserving its meaning.

This might one day be used for paraphrasing, the team posits, or machine translation and conversational systems. And it could complement systems like those demonstrated by Microsoft Research in November, which leverage sophisticated natural language processing techniques to reason about relationships in weakly structured text. 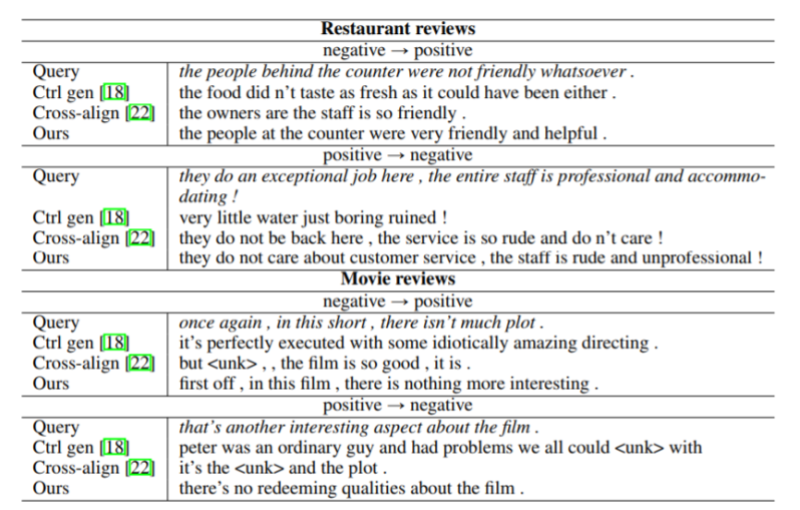 Above: Google’s AI system changing the sentiment of sentences.

The team first tackled the problem of sentiment control. They sourced a restaurant reviews dataset — a filtered version of the Yelp reviews dataset — and a large collection of IMDB movie reviews for a total of 447,000 and 300,000 sentences, respectively, which they used to train the system.

After training, using a test dataset of 128,000 restaurant reviews and 36,000 movie reviews, the researchers attempted generating text snippets with positive sentiment from sentences with negative sentiment, and vice versa.

Evaluated on BLEU — short for “bilingual evaluation understudy,” a standard metric for evaluating machine-translated text — the AI system was able to outperform two leading text generation methods. Moreover, it consistently generated grammatically correct sentences related to the input sentence — to such a degree that study participants on Amazon’s Mechanical Turk judged its output to be more realistic than that of previous methods.

More impressive still, the researchers in another test used the system to control multiple attributes — including mood, tense, voice, and sentiment — of a sentence simultaneously. After training on a dataset of 2 million text snippets from the Toronto BookCorpus dataset, the model was able to translate sentences from indicative mood in the future tense (“John will not survive in the camp”) to subjunctive mood in the conditional tense (“John couldn’t live in the camp”). 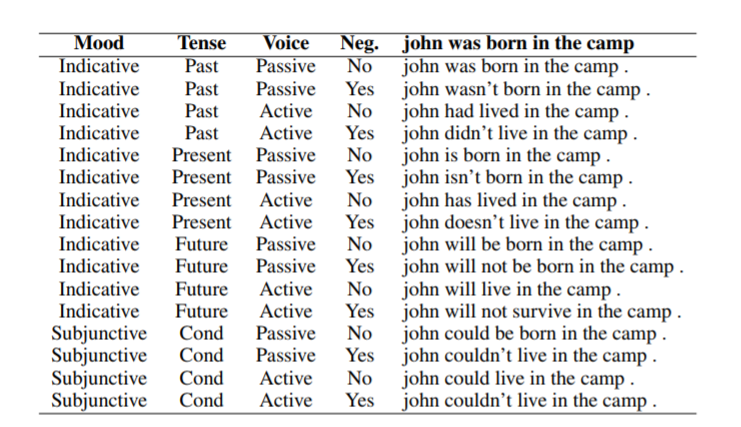 Above: The AI system can adjust multiple attributes simultaneously.

“We demonstrate that our model effectively reflects the conditioning information through various experiments and metrics,” the researchers wrote. “While previous work has been centered around controlling a single attribute and transferring between two styles, the proposed model easily extends to the multiple attribute scenario. It would be interesting future work to consider attributes with continuous values in this framework and a much larger set of semantic and syntactic attributes.”