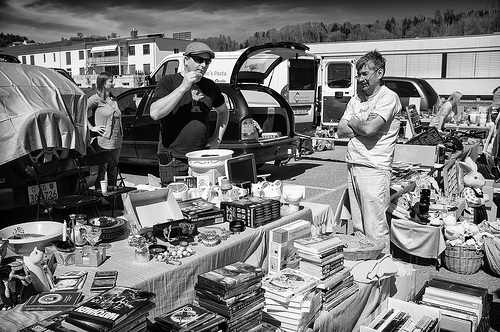 Follow me on LinkedIn Today, where this story originally appeared.

Imagine walking into a flea market where you don’t know the price of anything until after you’ve bought it.

The sellers won’t tell you exactly what it is they want to sell you. And you can’t even tell how good something might be until after you’ve taken it home and used it up.

Then you get the bill. You might be able to haggle over the price, but only long after you’ve bought the product. Your success rate at haggling will depend a lot on your negotiating skills and clout, as in any market. But in this one, it will also depend your ability to find the seller’s correct phone number, work your way through a complicated phone menu system, and master complicated, unfamiliar terminology.

Now imagine that there’s no way to compare notes with other buyers, because everyone is just as much in the dark as you are.

A flea market like that would be what economists call “inefficient.” Ordinary people would probably use a more vulgar term that starts with “F” and ends with “up.”

Yet that’s exactly what the health care market looks like in the U.S. today. If there was ever a market ripe for technological disruption, this is it.

Because of the lack of transparency over prices, the U.S. health care market has little correlation between price and quality. Sellers have almost total control over the market, and they resist any attempts to change the game by introducing more data — or easy-to-use tech tools to analyze and compare the data — because transparency would hurt their capability to charge high prices and avoid quality comparisons.

But there are signs that the barriers are starting to crumble.

Earlier this month, the U.S. Department of Health and Human Services released a pile of data about what 3,000 hospitals charge for the top 100 services they provide. HHS, of course, is the cabinet-level agency that regulates the $2.8 trillion U.S. health care market. It’s got an enormous amount of data about health care in this country, but until recently, that data was not widely available.

“We have a ton of data that we have collected over the years, and lots of it was just sitting locked up in a vault, doing nothing,” said Bryan Sivak, the chief technical officer and entrepreneur-in-residence at HHS, speaking yesterday at VentureBeat’s HealthBeat conference in San Francisco. (He’s @BryanSivak on Twitter.)

The data made a bit of a splash, particularly once the New York Times used it to identify the Bayonne Medical Center as the most expensive hospital in the country.

“It was a big win for the government to put this data out there,” Sivak said, when I asked him about it. “It very accurately demonstrated the wide variety and irrationality of prices that hospitals charge for the same procedures.”

The data dump was a tiny piece of what’s available. Fortunately, it is just the latest step in the department’s “data liberation” project. Sivak’s predecessor, Todd Park (now the chief technology officer of the United States), put the process in motion a few years ago. Sivak estimates that the HHS holds at least 1,000 different data sets in its archives. So far, just 400 have been cataloged on the agency’s data-liberation website, HealthData.gov.

And that’s just pricing data. The real treasure trove is quality data: How well various health care providers do in actually treating the conditions that we’re paying them to treat.

“You could be paying the highest price in the region for a given procedure and be getting the lowest quality, and not even know [this],” said Peter Isaacson, the chief marketing officer of Castlight, when I asked him about it. “And that’s the mark of an inefficient market.”

Castlight offers a service, sold to employers for the benefit of their employees, that shops for medical services by price and quality. It currently works with 50 different corporate customers, but there’s huge potential to offer this kind of service to every American — if the data can be made available.

Medicare, for instance, tracks a variety of data about mortality rates, readmission rates, infection rates, and other details. But it won’t provide this data on a per-facility basis except to qualified academic researchers; for-profit companies can’t currently use it.

What’s more, Medicare charges $100,000 for the data. That’s contrary to the spirit of Affordable Care Act, according to Bob Kocher, who helped shape the health care reform bill as an adviser to the Obama White House. The ACA mandates that Medicare release this kind of information, but it doesn’t specify exactly how or to whom, Kocher told me.

Medicare is probably restricting access in order to protect patient privacy, but it may also be under pressure from health care providers who don’t want to see this data publicized. Still, Kocher said, he’s confident Medicare will eventually release it — if there’s enough demand.

For-profit companies can use other available datasets, but these cost as much as $20,000, an attendee at HealthBeat complained — a barrier to very early-stage entrepreneurs.

Sivak acknowledges that this is a problem. But for those startups who need help, he offered two channels.

One is the department’s fourth annual “HealthDatapalooza,” happening in Washington in two weeks’ time.

“We’re expecting about 1,800 people to come to D.C. for a two-day celebration of all things health data related,” Sivak said. (Sounds like a jumpin’ party.) It will present plenty of opportunities for entrepreneurs and other interested people to dig deep into the HHS’s treasure trove of data, ask questions, and press the department to release more datasets.

Second, Sivak said, he’ll personally try to help any entrepreneurs who are having trouble getting to the data they seek.

We may not yet have all the data we need for an efficient health care market, but we’re moving in the right direction.