Founded out of Cambridge in 2014, Healx has an AI platform —  Healnet — that applies a range of machine learning techniques to public and proprietary data sources, covering literature, clinical trials, patents, drug targets, chemical structures, symptoms, and more. Part of this process involves using natural language processing (NLP) to extract insights and knowledge from all the published sources around specific diseases.

The culmination of all this data, Healx CEO and cofounder Dr. Tim Guilliams said, is a knowledge graph of rare diseases that could help pharmacologists or biologists unearth effective new treatments that would otherwise be much more difficult to spot.

“We use a variety of machine learning algorithms to solve the many tasks necessary to predict drug treatments and translate them in the clinic effectively,” Guilliams told VentureBeat. “We use deep learning AI algorithms that predict novel connections between, for instance, drugs and disease. This is known as ‘knowledge base completion’ and relies upon our comprehensive knowledge graph of rare disease data.” 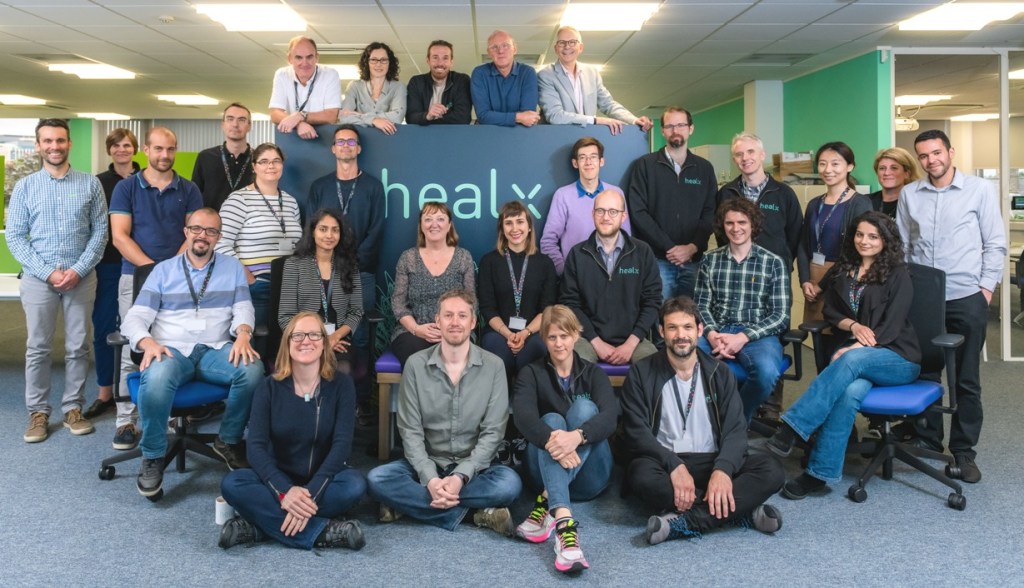 Above: Founders with the Healx team in Cambridge, U.K.

While rare diseases are generally defined as impacting a small percentage of people, there are up to 8,000 such diseases globally, according to the World Health Organization (WHO), which together affect some 400 million people. And the vast majority of these diseases — 95% — still don’t have an FDA-approved treatment.

It’s worth stressing that Healx isn’t setting out to develop completely new drugs; instead, it’s working to get the most value out of drugs that have already been approved by combining them in new ways.

“We don’t develop new chemistry and molecules; we maximize the value for the existing drugs — combining them in a clever way to improve their therapeutic effect when needed,” Guilliams explained.

Healx had previously raised around $12 million, the bulk of which came via a $10 million series A round 15 months ago. With another $56 million in the bank, the company plans to build a clinical-stage portfolio for rare diseases such as Fragile X Syndrome (FXS), a known genetic cause of autism. To help, Healx is launching a global accelerator program that will search for clinic-ready treatments of rare diseases within two years, a significant reduction from the decade or more it can typically take using traditional drug discovery processes.

“The current, expensive, trial-and-error-based model of drug discovery hasn’t changed in a century,” added Atomico principal and former surgeon Irina Haivas. “And it especially fails rare disease patients. Fifty percent of these patients are children, many living with highly debilitating symptoms. Healx has shown that doesn’t have to be the case, by combining AI with world-class pharmacological expertise and putting patients first.”

The Rare Treatment Accelerator, as Healx’s new program is called, is aimed at helping it collaborate with clinicians and patient groups that represent people with rare diseases and will involve reviewing shared data and resources.

“To date, it’s been families and patient groups who have had to become experts in the diseases affecting their loved ones and have often been the ones driving forward the efforts into finding new treatments,” Guilliams said. “With our unique combination of in-house R&D, industry collaborations, and now the Rare Treatment Accelerator, we look forward to supporting these groups in their mission.”

AI and machine learning are infiltrating pretty much every industry, and the drug discovery realm is no different. In the past few months alone, Utah-based Recursion Pharmaceuticals took its total funding to $230 million with a fresh $121 million raise; London’s BenevolentAI secured $90 million, taking its total inbound investment to nearly $300 million; and Maryland-based Insilico Medicine locked in a further $37 million. As it happens, earlier this year Insilico Medicine partnered with A2A Pharmaceuticals to launch Consortium.AI, a joint venture designed to treat rare diseases with AI.

While all these companies share a common goal, namely using machines to speed up drug discovery and development, Healx is carving out its niche by “maximizing the value of already-approved drugs” while focusing on rare genetic diseases.

“Because we start from safe, existing drugs, we can quickly and cheaply translate them in the clinic, which is key to Healx’s mission,” Guilliams said. “The trials for our Fragile X treatments are just the start of the impact we believe our technology is capable of having on drug discovery.”