San Francisco-based HomeLight, which develops AI-driven software and services for home buyers, sellers, and real estate agents, today announced that it has raised $109 million in funding from a raft of investors, bringing its total raised to over $160 million. Zeev Ventures led the round, with participation from Group 11, Menlo Ventures, Crosslink Capital, Stereo Capital, and others.

CEO Drew Uher said the fresh capital will be used to expand the company’s agent and investor matching platform, build new consumer products, and expand the coverage of existing tools. The funding comes after a year in which HomeLight launched an agent services division — primed to grow to 30 markets in 2020 — to provide title and escrow services to agents and home sellers, and after it acquired Colorado-based Eave to expand into mortgage lending.

“We are pioneering the real estate transaction of the future. This latest round of financing represents a significant vote of confidence in this goal. We couldn’t have asked for a more trusted and committed group of partners in this journey,” said Uher, who founded HomeLight in 2012. “We’re more excited than ever about the future of real estate and HomeLight’s ability to drive a better consumer and agent experience.” 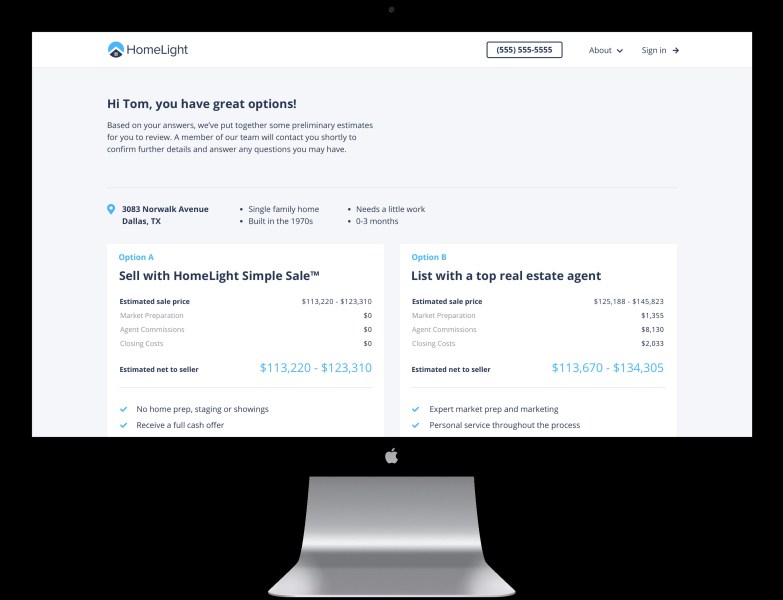 HomeLight says its algorithms draw on over 40 million real estate transactions and more than 1.4 million brokerage profiles to compare agents on several metrics, like the number of homes agents sold within a mile of a given property and the percentage of properties sold over listing price. HomeLight provides recommendations for top-performing agents and steers folks looking to sell homes to its Simple Sale product, which taps into a network of over 70,000 preapproved agents and over 150 cash buyers who compete to buy.

HomeLight touts the sophistication of its home value estimator, which leverages AI models that take into account answers to questions like “What is the condition of your home?” and “What type of property is it?” This is paired with housing market data from “multiple trusted sources” to predict homes’ current value with superior accuracy.

HomeLight derives revenue from agents’ final commission in the form of a 25% referral fee. Importantly, the results it shows only include agents who’ve agreed to pay HomeLight after they transact with their customers. While the company ranks agents independently of their referral status, it doesn’t match consumers with agents who haven’t signed the referral fee agreement.

That somewhat exclusive model hasn’t deterred growth, evidently. HomeLight says its base of 449,000 customers has driven over $17 billion of real estate business nationwide.

“We’ve been part of HomeLight since their seed stage and have been proud investors in each round since. HomeLight has innovation on its side, and a seven-year head start on other companies in the [property tech] space hoping to monetize agent referrals,” said Dovi Frances, founding partner of Group 11. “It’s the only consumer-centric, one-stop-shop marketplace for real estate needs, and we think the sky’s the limit for HomeLight’s future growth.”