Hover, a startup developing AI-powered apps that create 3D models of homes from smartphone photos, today raised $60 million. The 200-employee company says the proceeds will be used to deepen existing relationships with insurance carriers as Hover expands its product offerings.

In 2017, 6.26% of insured homes experienced a claim, compared to just 4.87% in 2014. Usually, homeowners need to be present at the time of the interior home inspection, and inspections can take between 30 and 90 minutes depending a home and the size of the property.

Hover, which was founded in 2011 by Ross Hangebrauck and former Intel engineer and U.S. Marine Corps veteran A.J. Altman, leverages cloud-hosted computer vision algorithms to generate 3D models with as few as eight pictures taken from different angles. Hover’s tools allow homeowners and contractors to extract measurements in PDF or Excel format and to visualize different products, colors, and materials including roof, siding, windows, doors, brick, stone, stucco, gable, and trim on the models they’ve captured. They’re able to share links to those models via the messaging channels of their choice and to purchase materials directly through Hover from collaborators like The Home Depot, roofing manufacturer GAF, and materials distributor Beacon.

The approach isn’t novel per se. In April, Zillow launched 3D Home, an AI-powered iOS app that allows homebuyers to view 360-degree tours of properties created from images captured with an iPhone camera. Modsy, a startup developing a platform that lets property owners create renderings of rooms and restyle them in real time, also taps AI for 3D automation. 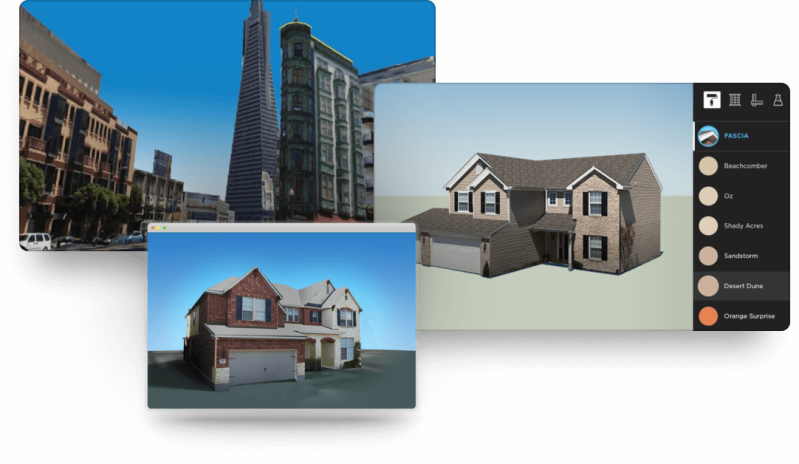 But Hover claims it has a technological advantage over rivals. The company’s technology ostensibly works for single-family homes and townhomes in addition to multifamily properties, and it can account for tight lot lines, urban alleys, and rural areas even with some vegetation or obstructions. Models and photos, which can be reviewed and edited before they’re submitted, are free to store in Hover’s cloud indefinitely. And they can be accessed from PCs and smartphones remotely and sorted by address, location, and more.

Its apps have hundreds of thousands of users representing tens of thousands of home improvement companies, and Hover — which expects to finish 2020 with a $70 million run rate — claims it works with five of the top 10 U.S. insurance carriers, who use its technology to reduce claim adjusting costs, decrease cycle times, and improve the overall customer experience. For instance, Hover says it’s able to provide a roof square estimate and total living area within 30 minutes of capturing photos.

Altman says the near-term focus will be continuing to improve the user experience and delivering value for partners and customers.

Hover’s series D round announced this week, which was led by insurance carriers Travelers, State Farm Ventures, and Nationwide, brings the San Francisco-based company’s total raised to $147 million to date. It follows a $25 million series C in April 2019.