The equivalent of over 100 human lifetimes is spent globally each day on data entry from invoices alone, according to Czech AI startup Rossum. And that is why the company is using deep learning technology to help businesses ditch manual data entry altogether, freeing up humans to focus on more complex or creative tasks.

The problem Rossum is looking to fix is this: Each year an estimated 550 billion invoices are exchanged, and they come in all shapes, sizes, and formats. Extracting key information from these invoices has traditionally been a labor-intensive manual process, but automated tools are increasingly joining the fray. Unlike many traditional optical character recognition (OCR) data extraction tools, however, Rossum is using “cognitive data capture,” which involves pretraining machines to understand documents much like a human does.

OCR tools rely on different sets of rules and templates to cover every type of invoice they may come across. The training process can be slow and time-consuming, given that a company may need to create hundreds of new templates and rule sets. In contrast, Rossum said its cloud-based software requires minimal effort to set up, after which it can peruse a document like a human does — regardless of style or formatting — and it doesn’t rely on fully structured data to extract the content companies need.

The company also claims it can extract data 6 times faster than with manual entry while saving companies up to 80% in costs.

Rossum was founded out of Prague in early 2017 by former AI PhD students Tomas Gogar, Tomas Tunys, and Petr Baudis. In its first three years, the startup has secured big-name clients on every continent, including Siemens, Nvidia, IBM, Box, and Bloomberg. Today Rossum announced that it has raised $4.5 million since its inception — including $1 million in preseed funding to develop a minimal viable product between 2017 and 2018 and a $3 million seed round that closed last month.

The funding round was co-led by U.K.-based seed investors LocalGlobe and Seedcamp, with participation from some notable angel investors, including Ryan Petersen, Flexport CEO and founder; and Elad Gil, who sold his startup Mixer Labs to Twitter in 2009 before becoming an investor in Airbnb, Instacart, Pinterest, Square, and Stripe, among others.

“Invoice data management is a huge unsolved problem,” Gil noted. “Rossum’s traction shows that the company is in a great position to solve this problem, as well as [tackling] many other data entry tasks using its highly versatile platform.”

Cognitive data capture isn’t a new concept. In fact, it’s something IBM has touted for a number of years as a means of extracting data from “never seen before” documents. A number of other organizations are also operating in this space, including long-established companies such as Kofax and Abbyy, while newer entrants include the likes of VC-backed HyperScience and Ephesoft.

Rossum is continuing on a similar trajectory, though it says its “cloud”- and “machine learning”-only approach strongly differentiates it from many of the more established platforms. Moreover, the company touts its friction-free signup, which includes a free trial period to demonstrate how it works.

“Staying in the cloud means that we don’t have to take care of on-premises installations and we have only one platform to take care of,” CEO Gogar told VentureBeat. “Therefore, all the engineering and research resources we spend [go] to all the clients equally.”

“In 1999, Salesforce said ‘We will do cloud-only CRM because it’s how to build the best product,'” Gogar said. “No one believed them, and now they are the best ones by far.”

Rossum’s pretrained AI engine can be tried and tested within a couple of minutes of integrating its REST API. As with any self-respecting machine learning system, Rossum’s AI adapts as it learns from customers’ data. Rossum claims an average accuracy rate of around 95%, and in situations where its system can’t identify the correct data fields, it asks a human operator for feedback to improve from.

Above: Rossum in action

Rossum claims 30 full-time employees, plus another 20 who work as “AI teachers” for its AI engine. With a fresh $3.5 million in the bank, the company plans to expand globally — including opening a new office in the U.S. — and target its technology at more sectors.

While Rossum’s clients are mostly using the platform to process invoices and similar documents, such as delivery notes, its technology can be applied to many different kinds of documents across industries, including accounting, logistics, insurance, and real estate management.

“Technology should make data entry easier and cheaper, but businesses have become too reliant on using old systems that no longer meet their needs,” Gogar said. “Rossum solves these problems without complicated, clunky integrations, without teams of developers, and without high costs. Our solution is smart enough to be tailored to suit any type of business, and it’s scalable to work with even the largest of firms.”

In terms of costs, prices can vary greatly depending on the volume of documents that need to be processed and specific requirements, but Gogar said that subscriptions start at around $800 per month and that the platform is a “good fit” for companies that process more than 5,000 documents during that period.

It’s worth noting the inherent synergies between companies like Rossum and the myriad robotic process automation (RPA) platforms out there. RPA is software that companies install on machines to help businesses automate laborious, repetitive tasks — it learns from human activity using computer vision and rule-based processes and then copies it.

A lot of money is flying around the RPA realm at the moment, with Automation Anywhere recently raising $290 million at a $6.8 billion valuation and UiPath closing a whopping $568 million funding round at a $7 billion valuation. A slew of big-name backers have invested in both these companies, including Salesforce, Alphabet, SoftBank, Goldman Sachs, Sequoia, and Accel. 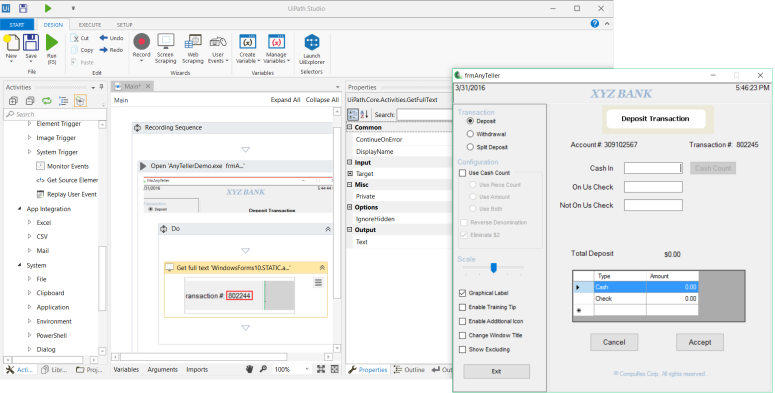 So what is the difference between what Rossum is doing and RPA? According to Gogar, they are complementary services, as RPA is generally better suited to structured data. As such, Rossum is actually a technology partner of RPA companies such as Blue Prism and UiPath. (Rossum investor Seedcamp is also an investor in UiPath.)

With countless headlines proclaiming that AI is here to steal human jobs, companies are naturally sensitive to public perception when they develop automated technologies that will impact employment. That is why they often preemptively explain that they’re not trying to replace humans, but rather augment their jobs so they can do more interesting tasks instead.

This was echoed in a recent report commissioned by IBM, which found that while AI and automation would likely change how every job is performed, it would ultimately lead to an increased demand for creative skills. This is a sentiment Rossum is very much in tune with.

“Rather than replacing employees, Rossum’s aim is to speed up human operators, giving businesses more flexibility and reliability for their customers and helping employees focus their attention on more complex tasks or tasks that require creativity,” the company said.