Automation of jobs due to technology advancements is a well-known issue. In his 2016 State of the Union Address, U.S. President Barack Obama warned that technology “doesn’t just replace jobs on the assembly line, but any job where work can be automated.”

Obama was not the first U.S. President to be concerned about automation, however. John F. Kennedy in 1962 said that the major domestic challenge of the decade was “to maintain full employment at a time when automation … is replacing men.”

Despite these concerns, automation did not lead to quick and total job losses — neither in the 1960s, nor in the last century, nor even now. There are at least three forces that make relationships between technology and jobs more complex.

The history of previous industrial revolutions suggests that all three forces were in play earlier and helped to ameliorate job losses caused by progressing technology. For example:

However, there are concerns over the impact of technologies on employment in the future as it is not clear if the abovementioned forces will remain intact. For example, the sustainability of economic growth is in question. Moreover, the technology itself, due to the progress in artificial intelligence (AI), is getting closer to performing all imaginable tasks and taking over all jobs.

Even acknowledging these concerns, we still have reason to take an optimistic view of the impact technology has on jobs and employment.  The reason for optimism is the attitude and approaches of leading AI startups.

A look at 30 well-funded AI startups suggests that many AI pioneers apply their technologies in line with the forces supporting job creation, whether by addressing a growing demand at an underserved market, augmenting human abilities, or creating new options instead of replacing existing ones (Table 1). 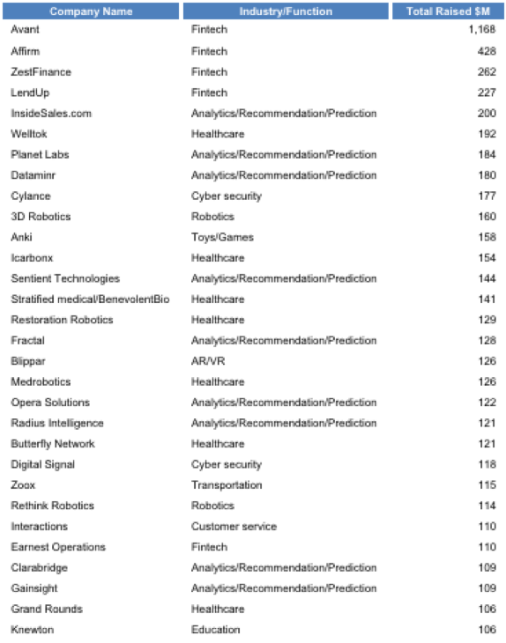 For example, 7 of the 30 sampled startups target health care as the major field to apply AI. And it’s reasonable to believe that growing demand in the health care segment, where 400 million people lack access to its essential services, may offset the potential job losses brought by automation.

Generating new demand from an underserved population, even by automating some jobs, is a viable approach to creating jobs in financial technologies as well. For instance, ZestFinance on the one hand removes human interaction from the underwriting process, therefore closing underwriting jobs. On the other hand, it makes financing available to 2.5 billion people without credit scores and therefore generates new demand and new jobs.

Some startups approach industries that are much less underserved. However, many of these startups use AI to augment human workers rather than to replace them. For example, Insidesales.com helps sales people to source and close deals using predictive and prescriptive analytics.

Robots developed by Rethink Robotics augment factory workers and allow them, in the words of one of Rethink’s clients, to become “like a surgeon [and] have everything at their fingertips: whatever tool they need, whatever product they need.”

The idea of augmentation is employed by health care startups as well. An ultrasound machine by Butterfly Network using “deep learning algorithms, trained by ultrasound experts, will guide clinicians with less expertise.”

Applying high tech to underserved markets or making it additive to humans is feasible, but not the only possible way to keep jobs in place.

These select, well-funded companies represent just the tip of the iceberg. There are more companies at their earlier stages. Whether it’s a smart glove that literally augments every move of a worker on a factory floor or a smart search engine that understands natural language, there are many ways for humans and technologies to coexist.

Therefore, it is feasible to believe that creativity and entrepreneurial spirit, in addition to widely discussed AI-related policies, will help humanity find its role alongside progressing technologies. At least until general AI and the singularity arrive.