Another week, and another bunch of “the robots are coming for our jobs” stories permeate the media sphere.

While many of these reports are little more than future-gazing predictions, there are some real and tangible instances where it appears robots are currently out to steal humans’ jobs.

Robotics startup Marble debuted its road-faring machine this week in partnership with Yelp, with some customers in San Francisco now receiving their food orders via a little white, four-wheeled trolley. 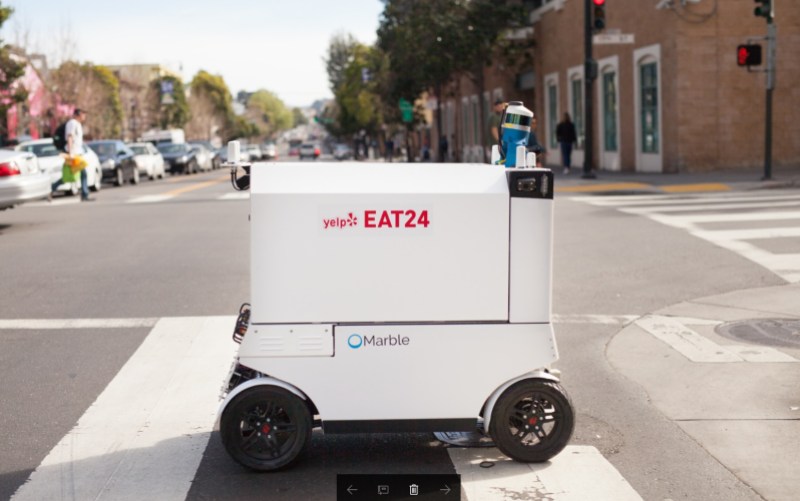 Above: Marble’s robot can deliver your food, in partnership with Yelp’s Eat24.

The fairly nondescript vehicle is capable of navigating busy thoroughfares using in-built sensors and cameras, while simultaneously mapping the sidewalk to optimize its route. While it probably won’t win many design awards, digging down into the nuts and bolts of the roll-out reveals that the robots won’t be fully autonomous at all — they will have human chaperones for the foreseeable future. A spokesperson told VentureBeat:

Marble’s robot use a hybrid approach, therefore all deliveries are semi-autonomous. This means that a human is in the loop to a certain degree, which varies from delivery to delivery depending upon the situations the robot encounters along the way.

The robots will be accompanied by a human chaperone while making deliveries, so they can take over if a robot does encounter something like a pothole or an open manhole which it is unable to navigate on its own.

On the one hand, it’s exciting that we’re at the stage of being able to send any kind of autonomous robot onto the streets to carry out a normal, everyday task such as delivering a pizza. But on the other hand, the fact that it’s actually being chaperoned detracts from the newsworthiness a little bit. Moreover, from looking at the puny little machine, it’s difficult to envisage a time when these traverse city sidewalks with pedestrians and deliver food entirely of their own volition. There are just too many things that could go wrong, from hidden potholes to pranksters smearing dirt on the vehicle’s cameras and sensors to curtail its journey.

A few weeks back, Domino’s announced a partnership with robotics startup Starship Technologies to deliver pizzas with autonomous ground robots in a handful of European cities. One of the reasons Domino’s is exploring such avenues is, apparently, an anticipated shortage of delivery drivers.

“With our growth plans over the next five to 10 years, we simply won’t have enough delivery drivers if we do not look to add to our fleet through initiatives such as this,” explained Don Meij, Domino’s group CEO and managing director.

If Domino’s is planning to scale up using delivery robots, then it’s likely Pizza Hut and hundreds of other delivery outlets are thinking along the same lines. An entire new ground-based infrastructure will be needed to accommodate dozens or hundreds of these machines at any given time, or there will be little space for people to move.

And this serves to remind us of the real point of these kinds of projects. They are still very much experiments — nobody really knows what will and won’t work, because we’re only doing this for the first time. It’s trial-and-error, which is the first phase in any new technological innovation. Fast-forward 50 years and people will view the current robotics escapades in the same way as we look back at some of the earliest concepts of the airplane, some of which are funny until you realize how important these steps are for progress. 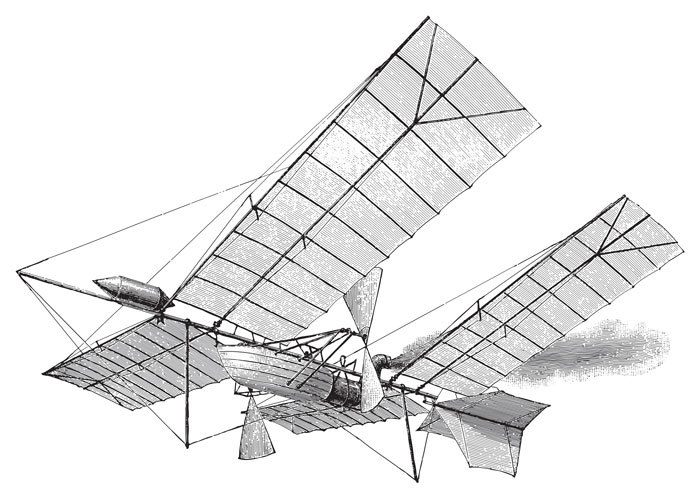 You don’t go from bicycle to Concorde overnight. And in terms of marrying artificial intelligence with robotics, we’re still at very much in the early days. We will see many more weird and wonderful tests and trials before we finally arrive at a model that works and has the necessary real-world infrastructure to support it.

I’m not normally one to geek out over the credits of TV shows, but there is something particularly alluring about the title sequence to Humans, the excellent series from AMC / Channel 4 that explores a future where people are forced to coexist with humanoids.

The series itself doesn’t delve too much into how the humanoids got to where they are, but the title sequence gives a clue as to some of the baby-steps that were involved. Clunky bots that fall over, robotic pincers that carry out precise stitches, mechanical hands that play the piano, all the way through to the development of fully functioning human-like creatures with synthetic skin. Watching this serves to remind us how early we are in the AI-powered robotics revolution.

Elsewhere in the modern robotics realm, real-world examples remind us how far we have to go in terms of design and application. The Telenoid was produced by Hiroshi Ishiguro Laboratories in 2010, in partnership with Osaka University and Advanced Telecommunications Research Institute International (ATR). With truncated arms and legs, the Telenoid is freaky as hell and looks like something from a horror movie. 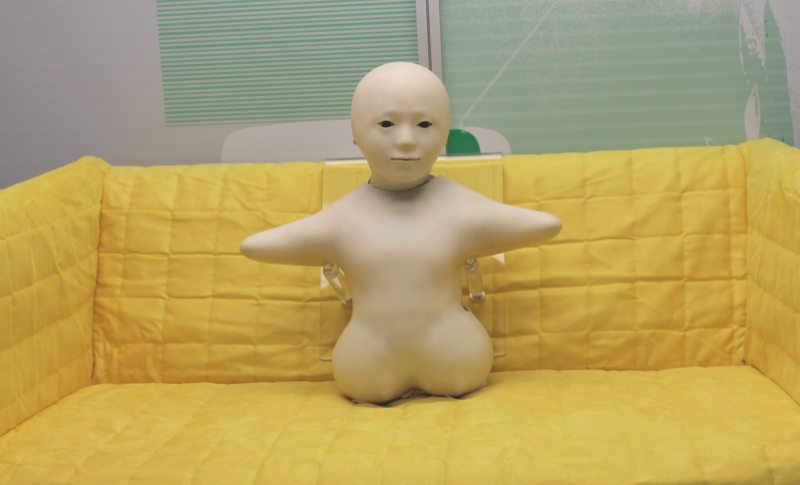 This so-called “minimalist” design was designed to make it like a human, but lacking any features that could determine it as male or female, young or old. I still think they could’ve given it arms and legs, though.

Those in control of Telenoid can capture their own voice and movements and project them through the robot from a remote location. It’s basically a rudimentary attempt at teleportation, in lieu of there being actual teleportation technology.

At any rate, you can bet your bottom dollar that 50 years from now, assuming the world hasn’t succumbed to some cataclysmic disaster, people will look back on all these innovations and laugh — before remembering that this was all necessary to get them to where they are, living in harmony with their robotic overlords.