Huawei has had a tough year on a number of fronts, with the U.S and other countries leading efforts to ban its networking equipment on cybersecurity grounds. But the Chinese giant hasn’t had a bad year in the consumer realm.

Today, Huawei revealed it has shipped more than 200 million smartphones in 2018, including its Honor sub-brand, confirming an estimation it made back in August. This represents an increase of roughly one-third from 2017, when it shipped 153 million.

According to Huawei, there are now 500 million Huawei phones in active use across more than 170 countries.

That Huawei has broken the 200 million units barrier in a single calendar year should perhaps come as little surprise. Indeed, in Q2 2018 Huawei displaced Apple to become the number two smartphone maker globally, the first time in seven years that Samsung and Apple hadn’t held the top two positions. This was more than a blip, with Huawei maintaining the second spot into Q3.

It’s also worth looking at the company’s growth over a longer time frame — in 2010, Huawei shipped 3 million smartphones, and by 2015 it had passed the 100 million mark. 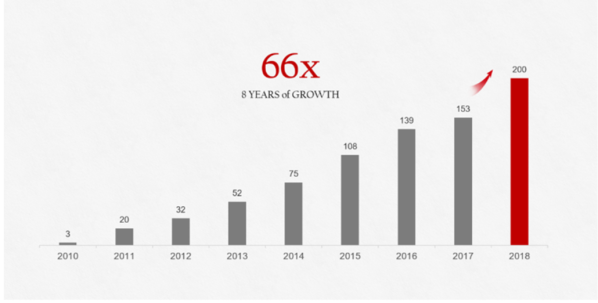 While Samsung hasn’t revealed its number of shipments for 2018, a look at figures for Q2 and Q3 reveals that Samsung shipped on average at least 20 million more units than Huawei, so we might expect the Korean juggernaut to have dispatched somewhere in the region of 300 million units this year.

It’s not clear who will be the overall number two smartphone vendor in 2018, given that Apple shifted 10 million more units than Huawei in Q1, but based on the current trajectory it is more than likely Huawei will cement the position for 2019.

In fact, Huawei Consumer CEO Richard Yu said back in August that his company could possibly surpass Samsung by the end of 2019.

“I think it’s no problem that we become the global number two next year,” he said. “In Q4 next year, it’s possible we become number one.”