Despite regulatory setbacks and fiercer competition than ever before, Huawei remains the second-largest smartphone vendor in the world by shipment volume. But phones are just one of many segments the Beijing-based company has invested billions in, with gadgets like tablets, set-top boxes, laptops, and headphones coming in a close second.

Then there’s its chip business. Huawei’s Shenzhen-based, wholly owned fabless semiconductor division, HiSilicon, has grown to become one of the largest integrated circuit designers in China over the last 15 years. Its Kirin lineup competes against chipsets from the likes of Qualcomm, MediaTek, and other Arm licensees, and the newest member of the family — the Kirin 990 5G — is a veritable chart-topper. In point of fact, Huawei says it’s the most powerful processor on the market and that it’s best in class with respect to power efficiency.

The Kirin 990 5G, which like the Kirin 980 is manufactured on a 7nm process but with extreme ultraviolet lithography, boasts 10.3 billion transistors in all. (That’s up from 6.9 billion in the Kirin 980 and 5.5 billion in the Kirin 970.) Contributing to the uptick is a refreshed eight-core architecture with two Cortex-A76 high-performance cores for demanding computation, two Cortex-A76 “middle cores” that juggle everyday workloads, and four Cortex-A55 efficiency cores that field light task like music playback and file transfers.

The cores themselves are identical to those in the Kirin 980, but their clock speeds have been increased slightly. The high-performance cores now hit 2.86GHz versus 2.6GHz, while the middle cores reach 2.36GHz compared with 1.92GHz and the efficiency cores get up to 1.95GHz versus the previous maximum of 1.8GHz. According to Huawei, this together confers a 10% single-core and and 9% multi-core performance advantage over Qualcomm’s Snapdragon 855. Rarely are all eight of the Kirin 980’s cores used simultaneously. Instead, a “flexible scheduling mechanism” ramps them up individually as needed — one efficiency core for music decoding, for example, or three middle cores for turn-by-turn navigation. Demanding apps like high-end games lean on four efficiency cores and two middle cores, or some combination of high-performance cores and middle cores.

There’s a powerful 12-core graphics chip inside the Kirin 990 5G that’s paired with the eight-core processor: The Mali-G76. It packs six more cores than the Mali-G76 in the Kirin 980 and a cache that serves to reduce bandwidth usage and power draw. These and other improvements enable the new Mali-G76 to leapfrog the Snapdragon 855’s Adreno 640 chip, according to Huawei, by 6% in terms of overall performance and 20% in efficiency.

When it comes to photography, the Kirin 990 5G features an improved dual image signal processor (ISP) that Huawei says is up to 15% more power-efficient than its predecessor. It’s capable of reducing noise in still images by up to 30% and in videos by up to 20%, thanks to block-matching and 3D filtering (BM3D) and dual-domain reduction techniques, the latter of which takes into account a video’s spatial and frequency domain in identifying and zapping artifacts. Huawei characterizes its performance as “DSLR-level.” 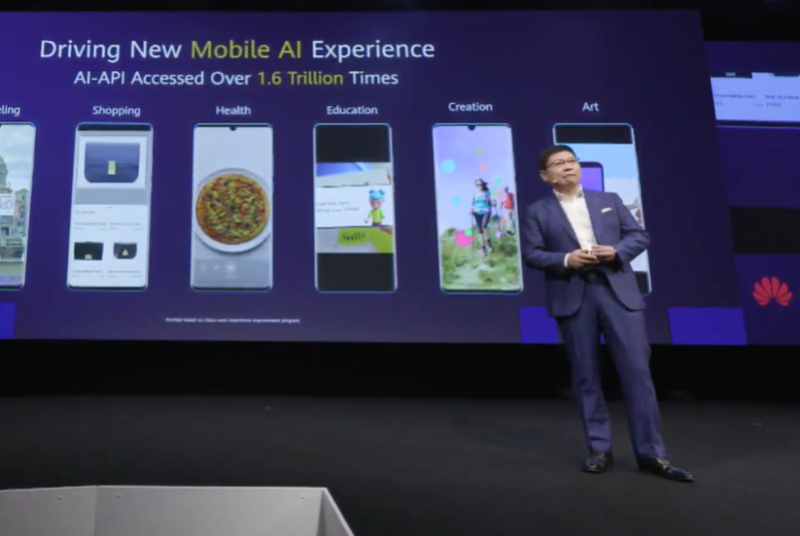 Qualcomm’s AI Engine, Samsung’s own Neural Processing Unit, and Apple’s A12 Bionic achieve the same ends through different means, but Huawei claims its homegrown Da Vinci architecture — the evolution of the NPU in the Kirin 970 and 980, which were designed by Cambricon — is far and away the most capable. To this end, it delivers tensor computation under half-precision FP16 and INT8 data types courtesy of two “big” cores (up from the Kirin 980’s single big core) for high-intensity workloads and one “tiny” core for less-intensive computation. A single tiny core is up to 24 times more efficient than a big core for tasks like facial recognition, according to Huawei.

Concretely, Huawei claims the Kirin 990 5G is up to 4.76 times faster than the Kirin 980 on the ETH AI benchmark, an Android app developed by research scientists at ETH Zurich to measure the performance and memory limitations associated with running computer vision algorithms on mobile devices. Perhaps unsurprisingly, the company also says the Kirin 9990 5G comes out ahead on all other typical AI benchmarks tested, including MobileNet (Int8) and Resnet50 (FP16).

The 5G chip arms race kicked off in earnest last year with the announcement of Qualcomm’s first 5G solution for mobile devices, and Huawei claims it has in that time managed to far surpass competitors from a technological standpoint. Case in point? The Kirin 990 5G will be one the first all-in-one, full-frequency 5G chipsets to market later this year, on a die area that’s roughly 36% smaller than rival products demonstrated to date. It will support four sub-6Hz antennas in total and both non-standalone (NSA) and standalone (SA) architectures as well as TDD/FDD full frequency bands, but not millimeter-wave.

The chip’s performance won’t disappoint if benchmark results are to be believed. Huawei claims the Kirin 990 5G’s machine learning-based adaptive receiver and split uplink design boosts download and upload speeds in “high-movement” weak-signal environments like cars, train stations, and busses, delivering up to 5.8 times the max upload speed of leading chipsets in preliminary testing. In spots with stronger signals, it’s theoretically capable of reaching downlink and uplink rates of up to 2.3Gbps and 1.25Gbps, respectively.

There’s no doubt about it: The Kirin 990 5G is Huawei’s most ambitious chip yet. Only time will tell how it performs in the real world, of course, but we shouldn’t have long to wait. Huawei confirmed that the chip will feature prominently in the company’s upcoming Mate 30 series, which will be announced at an event in London in September.

One thing’s sure: Huawei has Qualcomm firmly in its crosshairs. And if Huawei can deliver on its promises, it might just best its San Diego rival at its own game.