Autonomous threat detection company Hunters.ai today announced a $15 million round that will help scale its autonomous threat-hunting solution to defend enterprises from malicious attackers and missed intruders. Specifically, the Tel Aviv- and Lexington-based company plans to use the funds to deepen its machine learning R&D and expand its headcount internationally.

Incident detection time is a major contributor to the cost of data breaches. A study by the Ponemon Institute found companies take 197 days to identify a breach and 69 days to contain it, on average. It’s also an expensive process — threat intelligence often involves a subscription to multiple data feeds, and fees vary from about $1,500 to $10,000, depending on the number of feeds.

With its extended automated mitigation and response framework, Hunters aims to cut down on threat detection time and expenditures by picking up on weak signals hiding in the network noise. Its platform allows customers to leverage existing security solutions and data sources to detect more threats, connecting a range of databases and integrating telemetry across siloed and sparse IT stacks. Hunters applies its tactics, techniques, and procedures to surface potential attack signals, mapping them to the MITRE ATT&CK framework (a knowledge base of adversary tactics and techniques) and automatically analyzing, enriching, and correlating volumes of data. 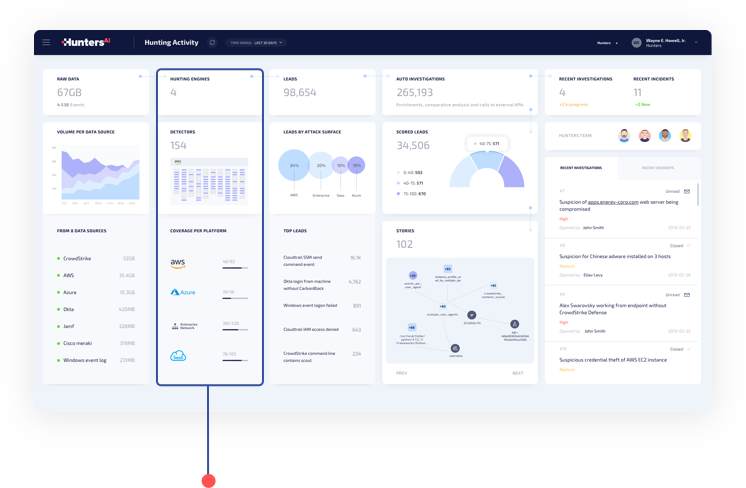 Hunters says this approach has already won over customers. Eighteen months after its founding, the company has secured contracts with Snowflake and TripActions via direct sales and through partner channels like the CrowdStrike Store and Snowflake Partner Connect.

Hunters’ series A was led by Microsoft’s venture fund M12 and Silicon Valley and U.S. Venture Partners, with participation from seed investors YL Ventures, Blumberg Capital, and Okta Ventures. The new investment brings the company’s total funding to $20.4 million, following a $5.4 million seed round in May 2019.