Central Banks, especially the Federal Reserve Bank, love to reference models to justify their rate decisions. And, while much of the business community and many economists question the relevance of the Philips Curve, the Fed still uses this model. But the model is outdated already and will become more out of sync as new innovations such as AI continue to transform our economy and workforce.

From a certain perspective, one can understand the Fed’s decision to continue using the Philips Curve, given their dual mandate of full employment and price stability; the Philips Curve is a model that includes both. However, “the curve” was based on studying unemployment and wage inflation between the years of 1861-1957 in the United Kingdom (which by today’s standards would be considered a relatively closed economy). As a result, the Philips Curve becomes less relevant with each passing year. It does not take into account the impact of globalization (wage arbitrage), internet commerce (the ability to purchase like goods out of market), or the labor force participation rate (impacted by changing demographics and attitudes as well as skill set mismatches). All three of these factors exert an increasing influence on both wages and employment levels in a way that is dynamic and asymmetric over time.

The Fed needs a new tool, and I may have a strawman that could fit the bill. I’m not putting this out as new doctrine. I’m suggesting it as a way to stimulate a much needed conversation about the obsolescence of the Philips Curve (or at least its application) and the need for a new model. I will leave to others to prove-out, modify, or disprove the idea. This is a theory that fits observations — trading the “curve” for a line.

I then factored in the labor force participation rate (LFPR). Unemployment only accounts for the employment status of those who want to work. I wanted to understand who is working out of all those capable of doing so (regardless of whether they choose to or not).

For my purposes, I define WUR as “employment” and compare the relationship between WUR and the Core PCE deflator (the preferred inflation measure of the Fed) to evaluate the appropriateness of or need for Federal fund rate changes.

It is crucial to include LFPR to obtain the most accurate representation of employment in today’s economy.  The use and availability of social safety nets will change from time to time, impacting the LFPR. A population’s workforce will change as generations (of varying size) enter or exit (retire) the workforce.  And, depending on the size of each generation, this can greatly impact the LFPR. An unemployment rate at 5% with a LFPR at 70% is fundamentally different from an unemployment rate at 5% with a LFPR at 60%. Despite the same unemployment rate, the economic growth potential with a 60% LFPR is materially weaker than that of a 70% LFPR, all other things being equal. The lower the economic potential, the lower the risk of rapid inflationary growth that may cause supply/demand mismatches, all other things being equal. Think of the LFPR as the size of an engine — the smaller the LFPR, the smaller the engine, the smaller the maximum potential output. The Philips Curve, by simply using U3 unemployment, is not capable of capturing the above variables; however WUR is designed to capture these variables.

The purpose of this exercise is to understand the historical relationship between WUR and PCE. The underlying premise I began with was that the higher the employment level (WUR), the greater the potential threat of damaging levels of inflation — as a result of greater potential economic growth (for example GDP). In this, the concept is consistent with the Philips Curve: The higher the employment rate, the higher the potential for inflation. However, in my model, employment has been redefined, and potential inflation has been expressed as a rolling three quarter forward (future) average relative to the WUR in any given period.

There is a widely held belief that it takes six months on average for Fed rate changes to take full effect. I wanted to benchmark potential future inflation at any point in time relative to (current period) WUR. To accomplish this, I used a rolling three quarter forward average of core PCE. I chose a three quarter average as this provided a mid-point of six months plus or minus 3 months on either side. Using this method, the correlation coefficient between WUR and 3Q rolling forward average was .53. If, by chance, I choose a rolling 2Q or 4Q average, the resulting coefficients would have been .51 and .55 respectively.  All three indicate a positive correlation; however, I believe the correlation is even stronger when observing the chart below. 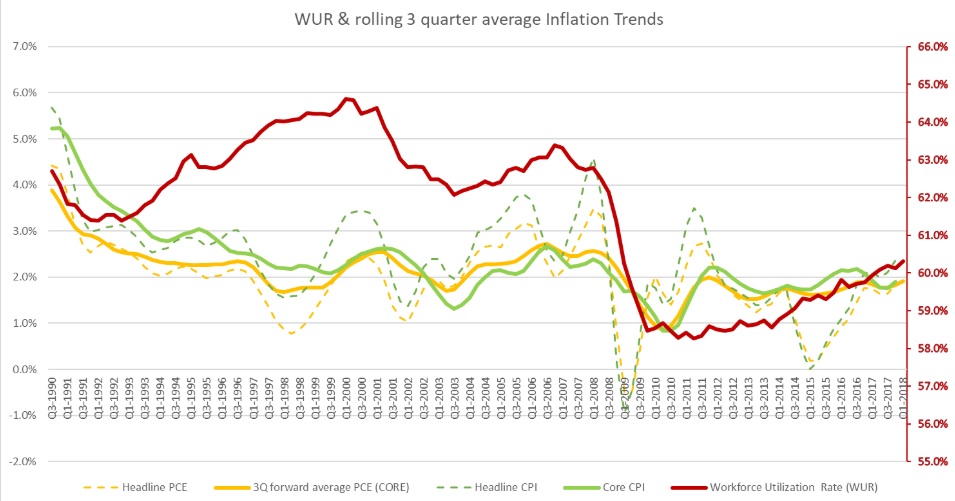 Observing this chart, visually there is a strong correlation between WUR and Core PCE — except for the roughly nine years between 1992 and 2001. However, I believe it plausible the divergence is due to a recalibration in the relationship between WUR and PCE due to improvements in productivity and workplace efficiency, as opposed to a break in the relationship. Although PCs were mainstreamed (mostly at larger companies) in the workplace prior to 1990, their true economic potential was not realized until widespread adoption at small- to medium-sized companies (combined with an emphasis from management to use computers). It was not just the introduction of the PC to most officer workers, but huge strides were made in software development, networking, utilization of databases, leveraging of the internet, even email that led to significant productivity gains for workers and in turn, companies. This development occurred in the early ’90s and is a plausible explanation for the recalibration between 1992 through 2001. Holding to this theory, I would expect another recalibration once artificial intelligence becomes mainstream, or even (to a lesser extent) once mobility as a service becomes more prevalent.

The implication of this approach is that the long-term relationship between WUR and Core PCE is not static— instead you must remain cognizant of pivotal shifts in the structural underpinnings of the economy to periodically recalibrate the WUR/Core PCE relationship. I believe the current structural underpinnings have remained substantially the same since 2000. No doubt, there have been efficiency improvements and productivity gains, but not to the degree we witnessed with the PC, or what we will likely see with the arrival of AI.  We are toward the end of the current economic structure and about to enter a new one. 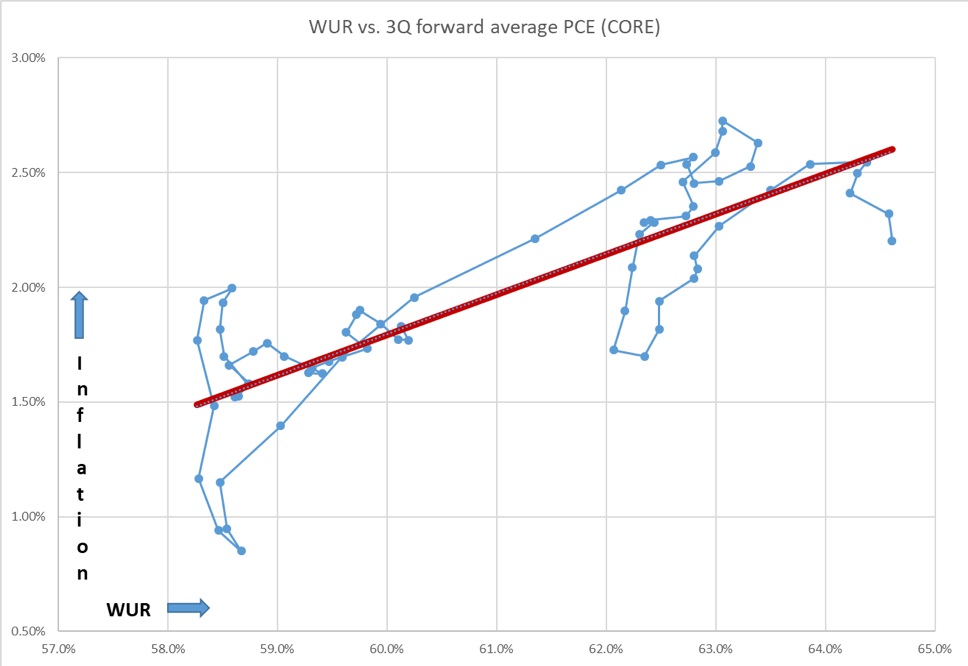 This chart plots the relationship between WUR and the three quarter core PCE average starting with the reporting period and including the two subsequent quarters since Q1 2000. It provides the historic relationship between employment levels and the subsequent average inflation rate over the next three reported quarters. By taking this approach, it provides a data point of what likely short-term inflation might be for any given WUR — provided the structural economic underpinnings have not materially changed.

A WUR inflection point at 61% is readily apparent based on the above chart. Any measure of WUR below 61% is likely to generate inflation at or below 2.00% in the following three quarters. Conversely, a WUR in excess of 61% will likely produce inflation above 2.00% in the following three quarters. The most recent WUR stats available are Q1, Q2 and Q3 of 2018, which were 60.3%, 60.4% and 60.4% respectively. If the Fed wants to target 2.00% average inflation, this chart suggest multiple hikes in 2019 may be aggressive, given the most likely inflation result for the next three quarters will be 1.8% (less than 2.00%) for a WUR of 60.5%. Tangentially, given the record low-rate starting point the Fed began with (and the very real need to increase rates from that level), I don’t believe the above chart necessarily contradicts their past actions. However, it does support doubt about inflation risk, which the Fed seemed oblivious to until very recently.

Now that short-term interest rates are nearing “normal” levels, the Fed is going to need to be much more sensitive to the impact additional hikes will have on economic growth (GDP). If they become overly concerned with inflation while WUR remains under 62%, there is a very real risk the Fed may overtighten and stall GDP.

When I first began this exercise, I expected the model to indicate the Fed’s dogged dedication to the Philips Curve was misguided, leading to overly-aggressive rate decisions. And I think that if the Fed’s starting point had been 2% instead of .25%, this could have been the case. However, given the fact that we were coming out of an extraordinarily low-rate environment, the Fed’s moves have had an uncharacteristically low impact on growth. Therefore, the typical slowdown in growth and inflation that would usually be observed from rate hikes was not realized to the same degree as it would have been if the starting point had been in the 2+% range. However, as Fed Funds approach 3.00% (a more normal level), they will need to take great care in minding the WUR/PCE relationship — dialing back aggressive rate hiking appropriately, or risk triggering a recession. And, by all accounts, recent comments from FOMC members indicate we are in for a pause to assess the impact of recent rate changes.

The Philips Curve is approaching obsolescence. Globalization and the fact that the Philips Curve cannot take into account the labor force participation rate, have relegated it to a data point rather than a definitive measure. My hope is that what I have laid out here will provide a framework for a new employment/inflation model more relevant to the modern economy.