Artificial intelligence jobs have been hot in Silicon Valley and elsewhere, with a machine-learning engineer getting an average salary of $142,858 a year. But AI job-posting growth has slowed, and interest in these jobs is also dipping, according to a study by job site Indeed.

Given that data is “the new oil,” data scientists are in high demand, and Indeed’s research shows job postings jumped 31% from 2017 to 2018. During the same period, however, job searches only increased about 14%. 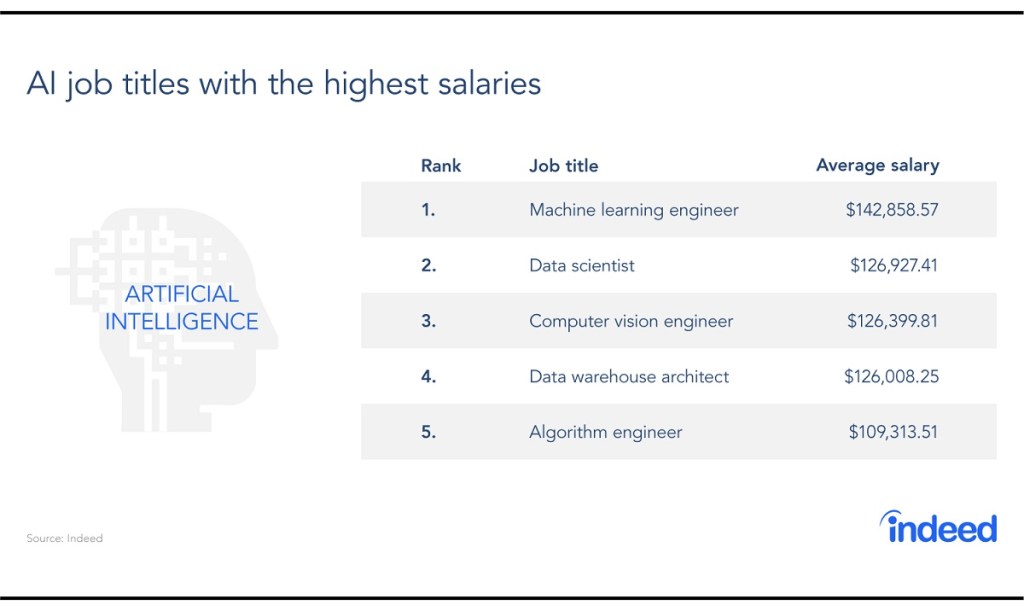 To learn about the most sought-after AI jobs posted on Indeed between 2018 and 2019, the firm’s analytics team identified 10 positions with the highest percentage of job descriptions that include the keywords “artificial intelligence” or “machine learning.”

While machine learning engineer jobs still have the largest number of postings containing relevant keywords, in 2018 they comprised a greater percentage of these postings (94.2%, versus 75% in 2019).

Many of the jobs requiring AI skills on 2019’s top 10 were nowhere to be found on 2018’s list — such as deep learning engineer, appearing for the first time in second place. Deep learning engineers develop programming systems that mimic brain functions, among other tasks.

These engineers are key players in three rapidly growing fields: autonomous driving, facial recognition, and robotics. The global facial recognition market alone is poised to grow from $3.37 billion in 2016 to $7.76 billion by 2022, according to one study.

The year-over-year differences could reflect the growing demand for data scientists at all types of companies; many employers now need a whole data science team, with staff from junior to director levels. By comparison, the 2018 list contained data science jobs that were more generic, such as data scientist, principal scientist, and computer scientist. Hiring for a range of experience levels appeals to a wider swathe of talent, which can help organizations better compete in the tight labor market, Indeed said.

Machine learning engineer is not only the top AI job in terms of the number of job postings, it also commands one of the highest paychecks. And it’s the role with the biggest boost in average annual salary, as compared to 2018.

Machine learning engineer is the third-highest paying job on Indeed’s 2018 and 2019 rankings. This year, however, the average annual salary for this position is $142,859, which is $8,409 higher than last year’s. That’s an increase of 5.8%, compared to the average 2.9% salary increase that human resources firm Mercer predicted for 2019.

Similarly, an algorithm engineer’s average annual salary rose to $109,313 this year — an increase of $5,201, or 4.99%. Both salary bumps are likely a result of organizations spending more to attract talent to these crucial roles in a competitive AI job market.

As with the previous list, the positions that top the salary rankings show an evolution and maturation of the overall AI market. More generalized positions, such as director of analytics, data engineer, computer scientist, statistician, and research engineer, were all on 2018’s list but didn’t crack the top 10 this year. New positions taking their place on the 2019 list include more differentiated data science jobs, such as senior data scientist and lead data scientist. 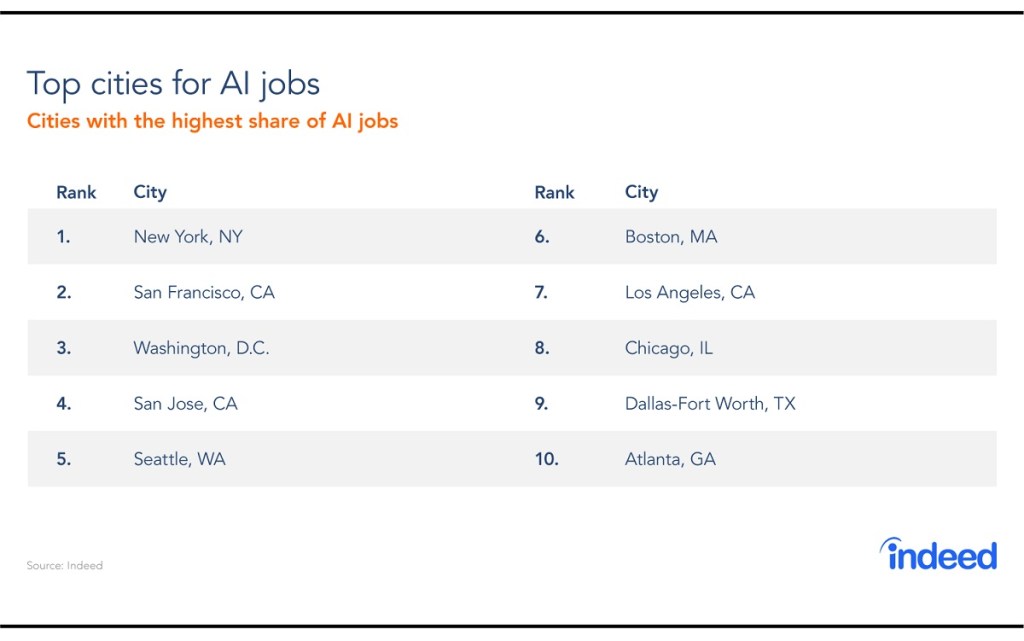 Compared to last year, 2019’s ranking of metropolitan areas with the largest percentages of AI jobs hasn’t changed significantly — though there are a few shifts, as well as a newcomer.

New York’s top position is surprising, but the city is home to diverse industries, from financial services to publishing — many of which are now adopting AI. Many West Coast-based tech companies (such as Amazon, Facebook, and Google) have a significant presence in the region. And New York has its share of AI-related tech startups, such as AlphaSense, Clarifai, Persado, and x.ai.

Three areas swapped positions on Indeed’s lists between last year and 2019. In 2018, San Jose ranked third (9.2%) and Washington, D.C. fourth (7.9%). But this year, D.C. ranks third, while San Jose is fourth. In 2019, Boston (slipping from fifth place) traded places with Seattle (rising from sixth), and Chicago ceded its seventh-place position to Los Angeles (formerly eighth). Dallas-Fort Worth held onto ninth place. And Philadelphia, at number 10 last year, was bumped off the chart by newcomer Atlanta.

Will AI create more jobs than it eliminates?

In the coming years, the big question will be whether AI generates more jobs than it eliminates.

Some studies suggest AI will, in fact, produce more jobs than it destroys. The 2018 “Future of Jobs” report from the World Economic Forum finds that by 2022, a shift in the division of labor between humans and machines — or AI-enabled automation — will displace 75 million jobs but generate 133 million new ones. Gartner estimates AI will create 2.3 million new jobs in 2020 while eliminating 1.8 million positions. And according to a 2019 Dun & Bradstreet report, 40% of organizations are adding more jobs as a result of adopting AI, while only 8% are cutting jobs because of the new technology. We’ll have to wait to see if that trend holds.