Intel is helping bring AI to the basketball court — Yale’s court, to be exact. Just in time for March Madness, the San Jose chipmaker today detailed the system that the college’s men’s basketball team — the Bulldogs — uses to capture and analyze live game footage. It’s supplied by five-year-old startup Keemotion, with a backbone built partly on Intel’s Xeon Scalable hardware.

“As a coaching staff, we want to put our players in a position to succeed,” James Jones, Yale head basketball coach, said. “The ability to analyze game and practice footage in real time with Keemotion’s solution allows me to teach in the moment, and is a real competitive advantage.”

Keemotion captures footage from three cameras in total, each strategically stationed around Yale’s John J. Lee Amphitheater — the second-largest gym in the world by cubic feet — to capture the court, scoreboard, and surroundings. The cameras autonomously track the basketball and adjust the center of the viewport during the “most exciting” moments, without human direction, and feed the footage to an Intel Xeon Scalable-packing server optimized with Intel’s Math Kernel Library software, a collection of math routines fine-tuned for science, engineering, and financial applications (specifically Intel AVX-512). This server stitches the 1080p footage into a single panoramic view, while AI models trained on Intel’s AI DevCloud cloud computing platform identify scoring plays and possessions.

Keemotion’s software platform streams the annotated footage to handheld tablets that coaches and support staff use to view annotated replays and hone in on specific points of the floor.  The advantages are tangible. According to a report by Research and Markets, by 2024 AI like Keemotion’s and Intel’s stands to improve individual and team performance by an average of 17 percent and 28 percent, respectively. 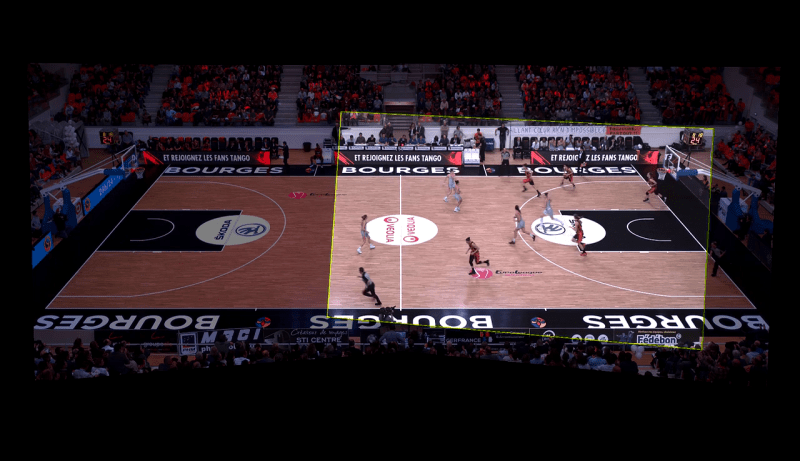 Above: Footage processed by Keemotion’s software — and Intel’s hardware.

“By working with Intel Xeon processors, we are able to deliver analyzed, searchable, panoramic video in less than 3 seconds, allowing coaches to have immediate access to a specific play or action,” said Keemotion CEO and former Brooklyn Nets general manager of minor league operations, Milton Lee. “Intel AI allowed us to unlock possibilities on image analysis that we could not before with traditional methods.”

Yale is not the only club using AI for postgame analysis, unsurprisingly. Other Keemotion customers include Columbia’s volleyball team, professional soccer leagues, NBA teams (notably the Golden State Warriors), and several NCAA Division I athletic programs. And automated labeling isn’t the only form of AI that’s becoming entrenched in sports.

If the sports player tracking and analytics industry’s current trajectory holds, it could reach $15.5 billion by 2023, according to Wintergreen Research.