VentureBeat today announced the finalists from the first ever international botathon, which took place over the weekend. More than 200 teams participated in this hackathon for bots. Finalists from Melbourne, New York, San Francisco, and Tel Aviv, as well as the online division, will present their new bots at MobileBeat 2016 in San Francisco July 12 and 13, where winners will be chosen by event attendees, expert judges, and online voting.

Here’s a summary of the finalists by region:

Led by Hugh Cameron, the Button.ai team’s winning submission is a bot that nudges email conversations along with quick-reply buttons below a message. Features like Smart Reply in Gmail Inbox and QuickType released with iOS 8 already provide response suggestions using a predictive model. The Button.ai bot gives control over those suggestions to the author, enabling one-click replies that offer concise, structured responses.

Above: Button.ai bot for Slack

Slack and Facebook have released support for message buttons over the past few weeks. The initial version of Button.ai will be available for Slack groups before moving to Facebook Messenger.

Cameron is the founder of Button.ai and participates in the BlueChilli 156 accelerator program. Nearly 50 teams had registered for the Australian portion of the botathon which was held at Revolver Creative in Melbourne and organized entrepreneur Peter Marko. Judges included Richard Celm, a small business and startup advisor; Steven Cooper, Xero senior developer evangelist; and Les Spencer, a behavioral scientist and clinical sociologist.

See photos and videos of the Melbourne event here.

The HappyTenant bot was selected as the New York botathon finalist this weekend. Produced by team members Chihli Lu, a director at TD Ameritrade, and David Leong, co-founder of DesignFeed.io, HappyTenant seeks to improve the rental experience for landlord and tenant alike. It’s an automated front desk, superintendent, and property manager in one.

Tenants can use the bot to report damage (like a broken light or clogged toilet) or request building services (laundry, appliance fixes, pet care) in real time. The bot automatically extracts relevant info, asks follow-up questions, and forwards it to the landlord/property manager immediately. It also notifies the tenant of updates to the request and can help with things like scheduling appointments with third-party services. Landlords have a dashboard where they can manage tenant requests and forward them to third parties to initiate next steps whenever required. 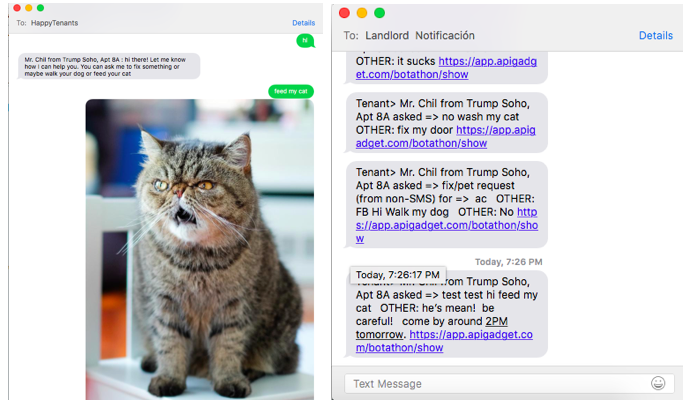 About 30 people (and a couple of dogs) joined the New York portion of VentureBeat’s international botathon, which was held at NLP startup Angel.ai‘s loft in the meatpacking district. They worked throughout the weekend — with many people staying late, and some even crashing on the couches to stay overnight. Judges included Sergio Silva, lead of partnerships and strategy for developer and platforms at Kik; Pablo Pera, who is involved with Reply.ai and Chat Bots Weekly, the leading newsletter about chatbots; Navid Hadzaad, founder of Angel.AI; and David Markovich, founder of ChatOverload, Slack marketing community Online Geniuses, missingkidsbot.org, and a few other things.

Botender seeks to end the frustration of restaurant patrons who are unable to get their servers’ attention. It’s an SMS service that answers customers’ menu questions, places their orders, and handles payments — including splitting payments. By automating routine tasks, Botender frees staff to focus on service and hospitality. 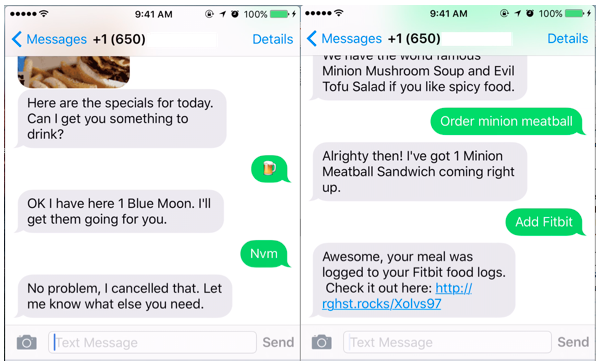 The winning team members were Mike Chang, vp of engineering at Pingpad, and Omar Sharif, lead Android developer at Pingpad, who competed against 40 other developers at the San Francisco portion of the botathon, which was held at the Holberton School. Judges included Esther Crawford, creator of MessinaBot and EstherBot; Khari Johnson, reporter at VentureBeat; Audrey Duet, VP of product at Xbrain; and Sylvain Kalache, cofounder of the Holberton School.

Watch a video of the Botender demo here.

Ondigo is a Slack bot that aims to be the fastest way to find and add new leads and contacts to Salesforce. With it, users can find contacts’ information straight from Slack (think Rapportive for Slack) and then create a new Salesforce lead or contact in seconds, without ever leaving Slack. The Ondigo bot can also send users Salesforce task reminders and briefings about people and companies prior to scheduled meetings.

Ondigo is led by Yoni Daniel, and has a small team operating in Israel. The Tel Aviv portion of the botathon occurred in partnership with venture capital firm Aleph, which organized a $50,000 challenge in order to encourage Israeli entrepreneurs to develop bots. The top three finishers were Redash (whose creators are unable to attend MobileBeat 2016), Ondigo, and Meekan, which was acquired by Doodle. 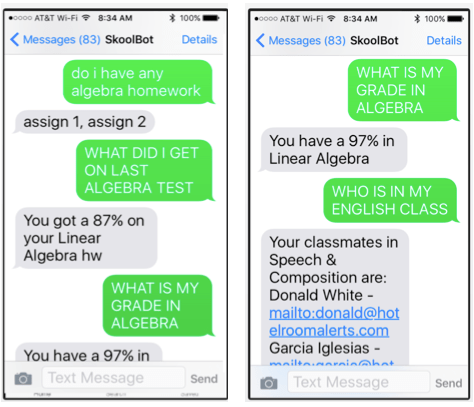 SkoolBot helps students see what homework they have, lets them easily contact teachers and classmates, and provides access to grades, schedules, and more.The Skoolbot team was led by 15-year-old Liam McKinley of Great Falls, Virginia, with Miko Borys and John McKinley also participating. They hope to launch their bot this fall. 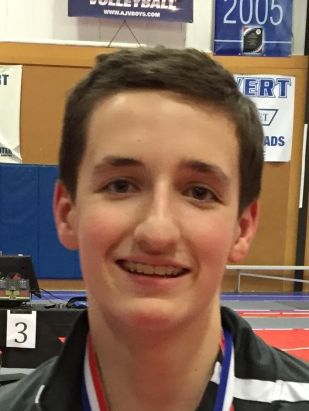 Above: 15-year-old Liam McKinley of Skoolbot

Simbalytics seeks to address a current need faced by bot developers: measurement. This bot is a simple analytics tool for bots and chat that lets developers track conversions and positive/negative interactions. It was created by Benjamin Cates, who is currently creating Restabot. 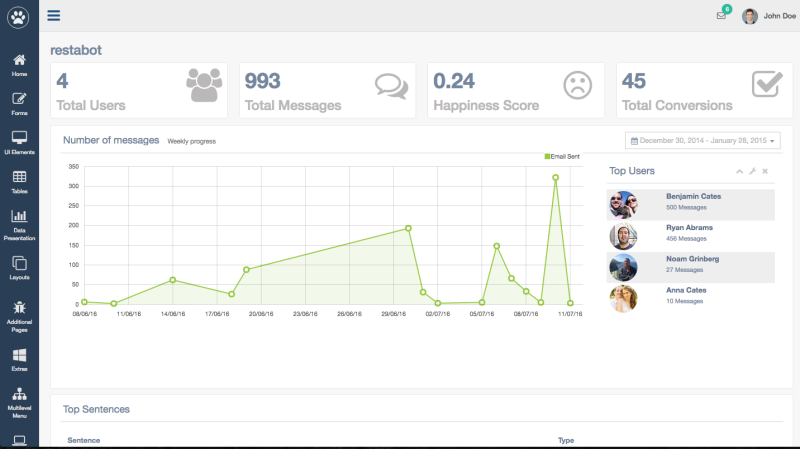 The online division of the botathon was created for participants outside of the Melbourne, New York, and San Francisco metropolitan areas. The 93 registrants came from eight time zones and countries that included India, China, and France. Judges included Matt Schlicht from ChatBots Magazine; John Koetsier, contributor to VentureBeat and mobile economist at Tune; and Jon Cifuentes, a bot analyst and entrepreneur.

Teams began their work on Saturday, July 9, at 9 a.m. (local time) and worked on their bots throughout the weekend, stopping at 5 p.m. on Sunday (local time). Participants had been tasked with creating a chatbot that will be judged on the basis of four criteria:

Four regional finalists and two online finalists were selected by a local team of experts at the completion of the botathon. Finalists have been invited to present their bots at MobileBeat 2016, which is taking place July 12-13 in San Francisco. There, a who’s who of the bot community — representatives from Amazon, Facebook, Kik, Google, and Slack, plus dozens of top developers and startups — will interact with these weekend wonder bots.

Three category winners will be announced on stage on July 13, as chosen by a panel of judges, by MobileBeat attendees, and by online voters. MobileBeat 2016’s distinguished judges are Robert Hoffer (aka “The Botfather”), Phil Libin of General Catalyst, and Alfred Lin of Sequoia Capital.