We first revealed back in July that Just Eat was partnering with Starship Technologies, the Estonia-based robotics startup created by Skype’s founders, to trial drone deliveries using a little six-wheeled sidewalk bot. Starship Technologies has been testing the robots across U.S. and European cities since late 2015, and it was already known that retailers from other industries would be testing robot deliveries commercially in London. This mirrors moves by companies such as Amazon, which had also previously revealed that it’s bringing drone-powered deliveries to market.

Now, after five months of “exhaustive” testing, the company says it has made its first proper delivery with one unsuspecting customer’s Turkish takeaway in Greenwich, London. Simone, who apparently enjoyed her falafel and lamb cutlets, represents what’s expected to be the first of many customers in Greenwich to receive their orders by robot, with plans afoot to expand the initiative across London next year.

“I couldn’t believe my eyes when I opened the door to find a robot waiting to greet me — it was like something out of a movie,” Simone said. “It is really incredible to think that this kind of technology and service is now available. It was very efficient and actually texted me when it pulled up. The only thing I wasn’t sure of is whether or not to tip.”

In terms of how customers access the food, well, it’s as simple as sending a text message to the customer’s phone with a link that opens the robot’s hatch. 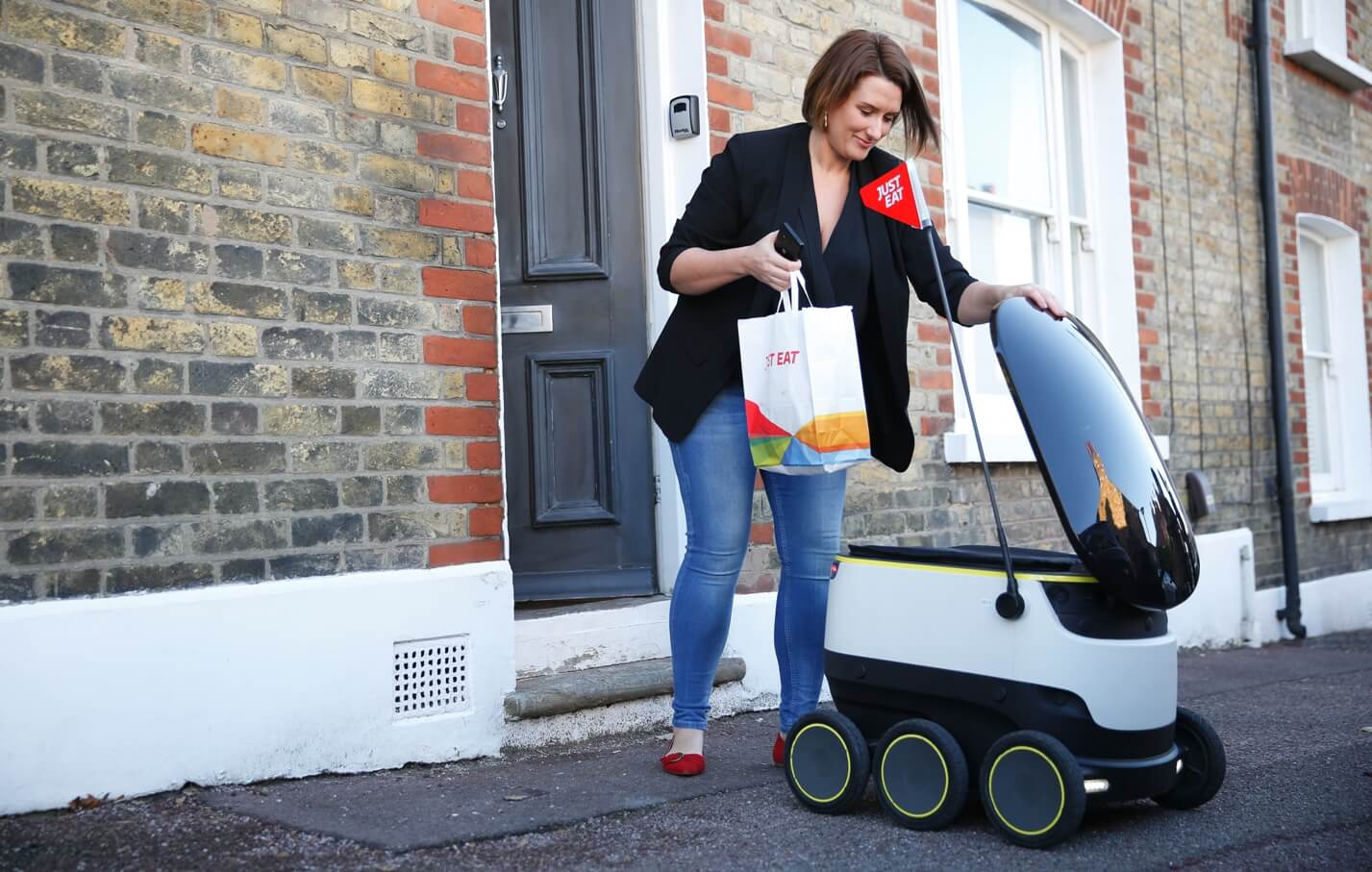 Similar to GrubHub, Just Eat aggregates restaurants and lets users order and pay for their food in-app. Buoyed by its $2.45 billion IPO a couple of years back, the company has been investing heavily in its product research and development (R&D), pledging to spend around $60 million in the U.K. alone this year. Back in June, the company debuted a new collaborative ordering setup that lets people place their orders through Apple TV, with each participant able to view the collective order on the big screen.

The robot delivery service won’t be fully open to every customer in Greenwich quite yet, but it will be gradually opened up to more people as the rollout widens.

“We have been working closely with Starship Technologies for many months to ensure that we can seamlessly integrate this exciting technology with our restaurants’ partners, customers, and online booking service,” said Graham Corfield, U.K. managing director at Just Eat. “Now that we are live in Greenwich, we’re working toward a larger rollout of the pilot program across London in the New Year.”

2016 could go down as a momentous year for automated technology. Back in August, NuTonomy launched the world’s first public trial of a self-driving taxi service in Singapore, followed shortly after by Uber in Pittsburgh.

Unleashing unmanned vehicles into society raises many practical questions, of course. What’s to stop vandals or other physical interference from hampering a ground-based drone on its way from A to B? “In all the tests that have taken place so far, there has not been a single case of theft or vandalism,” a spokesperson told VentureBeat earlier this year. “The robots have many theft-prevention features, including cameras, as well as tracking to the nearest inch.”