The so-called gig economy shows no signs of slowing — in fact, the opposite is likely true. According to a recent Gallup poll, roughly 57 million people in the U.S. — 29 percent of the country’s workers — have an “alternative work arrangement” as their primary jobs. And by 2020, some firms are forecasting that over 40 percent of the U.S. workforce will opt for contract work instead of full-time jobs.

Jyve, which emerged from stealth today, aims to bridge the gap between those workers and prospective employers. Specifically, it connects folks seeking short-term work with companies in need of extra hands, and it’s been doing so pretty successfully — bookings from grocer, brand, and retailer customers reached $400 million in the three years since its founding.

“Retail isn’t dying, it’s changing, and brands that are thriving are the ones investing in their in-store experience as well as owning their ecommerce initiatives,” Jyve CEO Brad Oberwager, who cofounded the company with Cammy Bergren, James Kairos, and Sam Purtill, said. 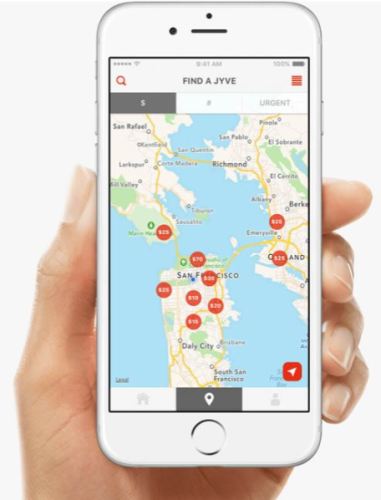 Above: The Jyve app, from a worker’s perspective.

Jyve makes the case that the rise of “nontraditional” commerce channels stands to hurt, rather than help, brick-and-mortar retail. Oberwager points to a recent study conducted by analysts at McKinsey, which found that between $200 and $700 billion in revenues from traditional grocery retailers could shift to other formats and channels in the next few years.

“The question we must ask then is how do we fill this labor shortage,” he said, “and also enable people to refine special skills that are multi-dimensional and rewarding?”

Jyve’s proposed solution is a “talent marketplace” of 6,000-plus workers — or “Jyvers,” in the startup’s vernacular — in 31 states that machine learning algorithms match with 4,000 stores nationally, based on each store’s merchandising and digital shopping needs. At the grocers and retailers where they work, they perform tasks like stocking products on shelves, inputting product orders, packing online orders and delivering them curbside, building in-store displays, and auditing shelving.

Before Jyvers accept a job, they get a physical address and star rating (as rated by fellow Jyve users) for the employer, in addition to an overview of requirements. (For a stock job, for instance, they might see a tag count and a total number of units in need of merchandising.) Meanwhile, employers get a real-time view of ongoing jobs and results from completed jobs.

It’s in this niche — retail — that Jyve is hoping to carve out a position in a crowded field of on-demand gig platforms. Apps like TaskRabbit, Porch, Thumbtack, NeedTo, Handy, Zaarly, Eden, and Managed by Q are just a few of the dozens vying for clients — and by extension, a slice of a global market that’s worth an estimated $3.7 trillion.

But Jyve has made inroads. It says that, to date, Jyvers have completed more than 365,000 jobs, stocked 16 million cases, and served locations in 1,215 cities.

“Jyve is one of the fastest-growing companies we’ve seen, having already reached $400M in bookings in three short years,” stated Chris Farmer, general partner and CEO of SignalFire and Jyve’s largest investor. “They are creating a new economic class that’s a level higher than gigs, built around skill, that’s benefiting some of the most important CPG brands, distributors and retailers.”