While the burgeoning urban micromobility movement offers many advantages over traditional transport, the unbridled proliferation of electric bikes and scooters also comes with major downsides — such as cluttered and hazardous sidewalks.

Against this backdrop, VC-backed Lime today announced a new approach to keeping riders off the sidewalk, using a mixture of sensors and an AI-based statistical model that predicts the likelihood a user was riding on the sidewalk and for how long.

For the pilot initiative, Lime is partnering with San Jose, California, a city that has been trying to crack down on rogue scooters by regulating the companies behind them. This effort aims to control the number of scooters that are deployed, ensure sufficient safety protocols are in place, and require scooter companies to keep riders off the sidewalk — something Lime is setting out to tackle with today’s announcement.

“Lime has been working on sidewalk riding detection since hearing concerns from some city and community partners, and we believe we may have finally cracked the code on this issue and developed a technology that is effective, safe, and scalable,” said Lime’s northern California general manager, EV Ellington.

Lime scooters already have onboard speedometers, but combining them with accelerometer data could allow the company to understand the vibration of the underlying surface using a “sophisticated statistical model” it designed in-house. This should enable it to distinguish between sidewalks and roads.

“With this functionality, Lime is able to discern with up to 95% accuracy when a rider is riding on a sidewalk instead of the street,” the company said.

Riders won’t be locked out or kicked off their scooter — they’ll merely receive a warning through a push notification if more than half of their ride occurred on the sidewalk. They may also receive an image mapping exactly where the sidewalk riding took place, and an email with the same warning. 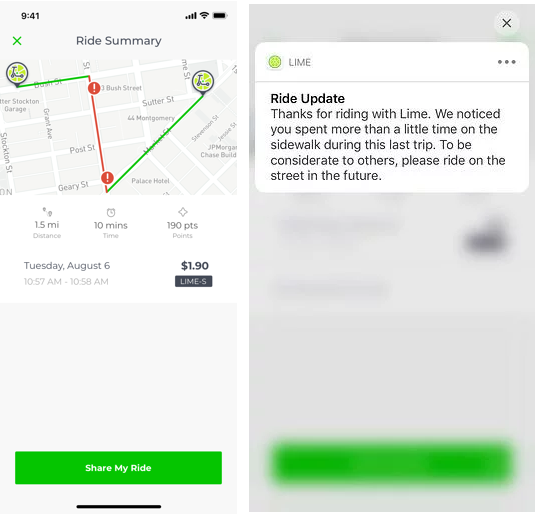 Above: Lime is rolling out sidewalk detection

At first, Lime will monitor every ride in downtown San Jose, though this is likely to be expanded to other regions in the future.

Interestingly, Lime hinted at another use case for the data it gathers, given that it will show exactly how many people are riding on sidewalks, at which locations, and for how long. Cities could use this data to inform infrastructure needs, such as creating dedicated bike and scooter lanes.

“We are excited to leverage the data we collect to better understand when and where people are riding on sidewalks,” Ellington added. “Once we have that data in hand, we can share it with the City of San Jose and work on potential infrastructure improvements, such as protected bike lanes, to make riders and pedestrians feel safe.”

Back in 2018, Lime announced a $3 million commitment to educate users about scooter safety, which has involved providing advance warnings about areas to avoid. Armed with street-level data, Lime can now issue proactive warnings after a ride.