Investments in London-based technology companies fell by 29 percent in 2018, but tech firms in the U.K. capital still managed to attract nearly double the amount raised by their counterparts in other European cities.

The annual findings were published by London’s promotional firm London & Partners, in tandem with data and research company PItchBook. 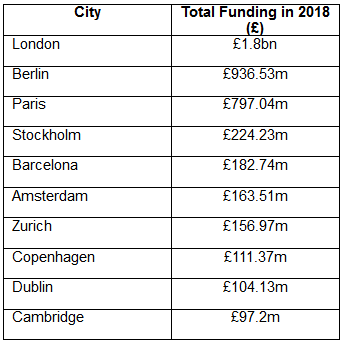 In effect, this means London startups and scaleups raised 29 percent less in 2018 than they did in 2017. However, tech investments in London and the U.K. have been steadily increasing over the past five years, with 2017 perhaps serving as something of an outlier, due to a handful of particularly large funding rounds — Improbable raised $502 million, Deliveroo raised $385 million plus another $98 million, and Truphone grabbed $338 million.

We can also see from here that London represented around 72 percent of the total capital raised by U.K. startups in 2018, a figure roughly in line with previous years.

It’s also worth looking at the figures on a country-by-country basis — the U.K. secured nearly $2.5 billion in VC investments last year, around 80 percent more than Germany. 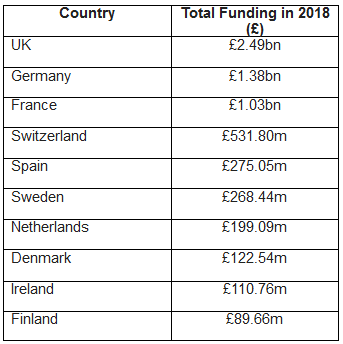 “2018 was another great year for investment into London’s tech sector, and today’s figures demonstrate that London is a place where ambitious, international companies can thrive,” said London & Partners CEO Laura Citron. “With high levels of investment for growth sectors such as artificial intelligence, fintech, and big data, our research shows that London is producing game-changing companies and ideas to change the world.”

However, with Brexit officially set for March 29, 2019, it will be interesting to see what impact it will have on both London and the broader U.K. technology landscape. London is renowned as the fintech capital of Europe, and the sector was responsible for 60 percent of all investments in the U.K. capital last year. With Britain’s future role in Europe mired in uncertainty, things could be much different this year.

Looking at other cities across Europe in 2018, Berlin’s companies nearly doubled the £456 million ($581 million) they raised in 2017, while Parisian companies attracted over 40 percent more than the previous year.

It’s too early to say what these numbers mean, but over the next couple of years the impact of Brexit on London’s position in Europe will become clearer.

“These figures demonstrate that London is going from strength to strength as a global hub for technology, innovation, and creativity,” added Rajesh Agrawal, deputy mayor for business. “The fantastic success of our tech sector is rooted in our city’s openness and our diverse, international talent pool. Regardless of the outcome of Brexit, London will remain open to innovation, talent, and investment from all over the world.”