If you followed the stream of announcements from Facebook developer conference F8 this week, you’ll have heard about the launch of Facebook AR Spaces, Messenger Platform 2.0, and tech being developed that gives people the ability to think and feel words. Perhaps lost among the flurry of announcements were the Chance the Rapper concert, Mark Zuckerberg Jesus, and the launch of a Golden State Warriors highlight reel bot.

Also noteworthy was the debut of financial services from some of the biggest names in the field. A total of five major financial services were announced, launched, or upgraded this week. Financial services — from personal finance bots like Trim and Digit to insurance sales to bank and credit card customer services — have proliferated on chat platforms like Messenger in recent months.

Mastercard also announced Tuesday that its Masterpass payment service is being used to power payments for select Messenger bots. This represents what appears to be the largest rollout of a payment service on Messenger — beyond the Messenger Payments API beta that works with companies like PayPal and launched last fall. Masterpass can take payment from MasterCard, as well as from banks like Citi and Capital One.

The Subway Messenger bot being rolled out, for example, can be used to order a sandwich or salad at more than 26,000 Subway locations in 15 minutes or less.

“Mastercard is working with partners, including financial institutions and merchants, and the first few that we have worked with are Subway, FreshDirect, and Cheesecake Factory,” Mastercard VP Linda Kirkpatrick told VentureBeat. “Additionally, Mastercard and Turkish mobile retailer Getir developed a Masterpass-enabled bot that allows consumers to shop and pay for their items with delivery guaranteed in 10 minutes. We will be announcing more partners as and when they are ready to launch.” 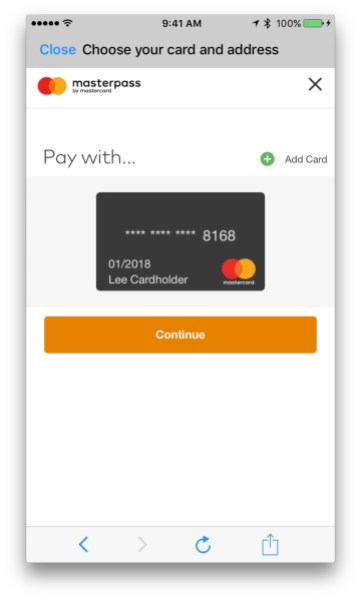 Efforts this week and last fall are part of a larger initiative by Mastercard to bring its payment processing to chat apps or voice-enabled assistants, Kirkpatrick said. Last fall, Mastercard announced plans to launch a personal finance bot for customers and a payments API to allow for payments within Facebook Messenger.

“Bots are the first phase of conversational interfaces, which many predict will — like the mobile touchscreen — fundamentally alter the way consumers interact with businesses and brands. Mastercard continues to work with partners and merchants to improve the consumer experience by providing them the freedom to shop when, where, and how they want in the most simple and secure way possible,” Kirkpatrick added.