Yahoo announced Thursday that users of its Yahoo Fantasy Football platform can now use a new Amazon Alexa skill to get updates during weekend matchup updates, get predictions, and learn about the performance of individual players.

The new skill emerges a little over a week after Microsoft announced that it is working with the NFL to create its own fantasy football bot.

“You’ll be able to use the Yahoo Sports Fantasy Football skill to follow your leagues’ standings, matchups, player points and more – all by using the power of your voice,” said Yahoo Sports vice president Kelly Hirano in a post Thursday.

Each skill question has to be preceded with “Alexa, ask Yahoo Fantasy Football…”

Once enabled on the Alexa iOS or Android app, the Yahoo Fantasy Football skill can predict the outcome of league matchups and standings.

Ask about individual players in the NFL and the skill will tell you their average fantasy score,which team in your league has the player on their team,  and whether a player is injured, questionable, or scheduled to hit the field. 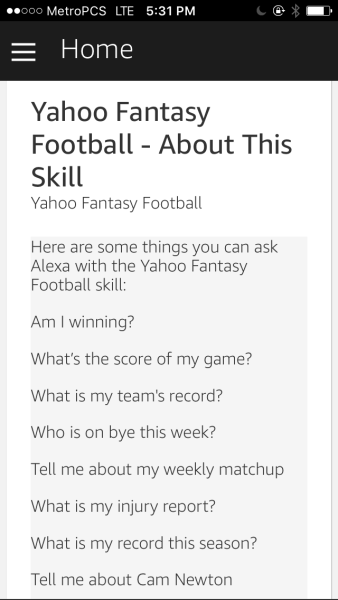 Above: Part of a list of questions you can ask the Yahoo Fantasy Football skill on Amazon Alexa-enabled devices. Credit: Screenshot from the iOS Alexa app.

“So we started experimenting and this is something that we’re in the early stages of building and our hope is for the next season we’ll have this bot, which will allow each one of us to engage in a very different way with what all of us at least in the United States are obsessed with which is fantasy football,” Nadella said.

The NFL bot will consider the data and help choose who to start in every position. The bot demonstrated by Nadella and Sanders did side-by-side comparisons to decide who to start at quarterback. The bot will also be able to share individual player statistics, and suggestions during fantasy football drafts.

Microsoft declined to comment on a potential release date of its NFL fantasy football bot. 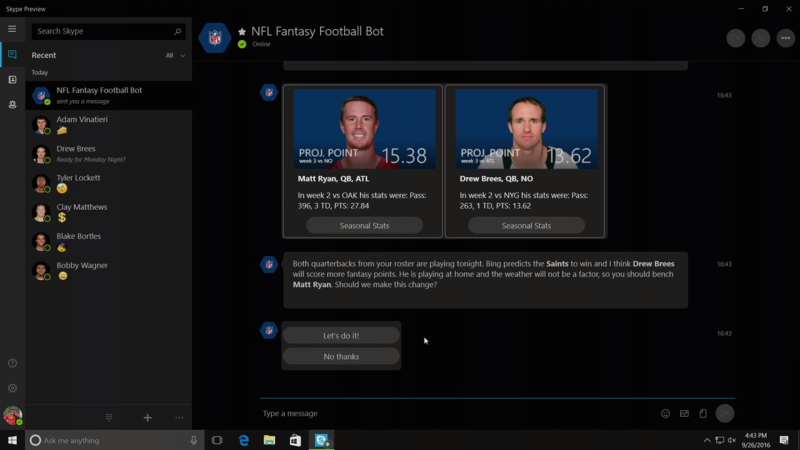