The approach to achieve state-of-the-art results uses multi-task learning and a knowledge distillation method first introduced in 2015 by Google’s Geoffrey Hinton and AI chief Jeff Dean. Microsoft plans to open-source the MT-DNN model for learning text representations on GitHub in June, according to a blog post published today. 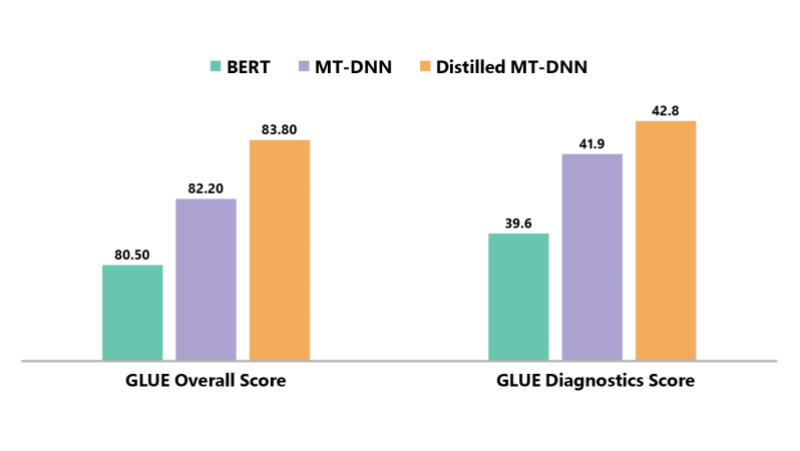 “For each task, we train an ensemble of different MT-DNNs (teacher) that outperforms any single model, and then train a single MT-DNN (student) via multi-task learning to distill knowledge from these ensemble teachers,” reads a summary of the paper “Improving Multi-Task Deep Neural Networks via Knowledge Distillation for Natural Language Understanding.”

Bidirectional Encoder Representations from Transformers (BERT) was open-sourced by Google last fall. Google claims a state-of-the-art language model can be made with BERT and a single cloud TPU in 30 minutes.

The news comes a day after Microsoft open-sourced an algorithm behind its Bing search engine and Google introduced Translatotron, an end-to-end translation tool that can adopt the tone of the original speaker’s voice.

At Build, Microsoft showcased how businesses can create AI assistants for their employees with Semantic Machines tech, the Bot Framework got an upgrade for more multi-turn dialogue, and Azure Cognitive Service and Azure Machine Learning services got upgrades. A new AI and robotics platform also launched in limited preview, and the ONNX partnership for interoperable AI introduced Nvidia and Intel hardware optimization for faster inference.

At I/O, Google showcased what it’s like to use its on-device machine learning powered Google Assistant and rolled out tools for Android app developers to connect with Google Assistant. Upgrades for ML Kit and its cloud TPU service were also announced.