Like other tech giants, Microsoft wants everyone to know that the company is heavily investing in AI. The latest example in this quest is Microsoft’s explanation today that it “leveraged AI at scale to greatly improve the quality and reliability of the Windows 10 April 2018 Update rollout.”

The company also shared today that over 250 million Windows 10 machines are running the April 2018 Update (out of over 600 million as of November 2017), and that it is the fastest version of Windows 10 to reach the milestone. By means of comparison, the previous Fall Creators Update was the fastest to reach 100 million devices.

Microsoft says that the April 2018 Update rollout was the first time AI was used (although it did start a pilot during the Fall Creators Update). Specifically, Microsoft “intelligently” selected devices that its feedback data indicated would have a great update experience, pushed the update to them first, and then continuously collected update experience data to retrain its models. The goal wasn’t a speedy rollout, but a safe and reliable one:

We studied characteristics of devices that data indicated had a great update experience and trained our model to spot and target those devices. In our limited trial during the Fall Creators Update rollout, we consistently saw a higher rate of positive update experiences for devices identified using the AI model, with fewer rollbacks, uninstalls, reliability issues, and negative user feedback. For the April 2018 Update rollout, we substantially expanded the scale of AI by developing a robust AI machine learning model to teach the system how to identify the best target devices based on our extensive listening systems.

For past updates, Microsoft relied on feedback and telemetry data to indicate that there may be an issue, and then adjusted to prevent affected devices from being offered the update until the issue is resolved. This time around the company also had its AI model as a third indicator of potential problems. 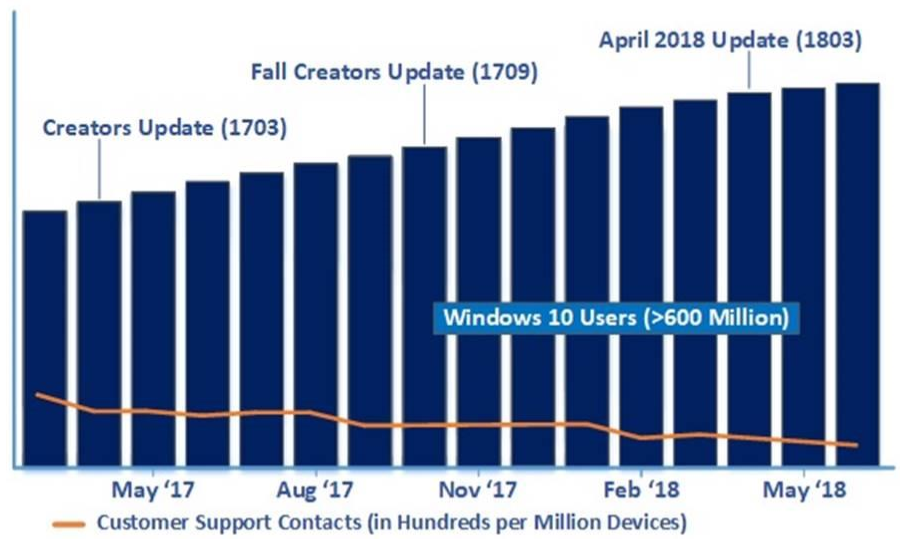 Indeed, early data shows the April 2018 Update exceeds previous versions of Windows 10 in both reliability and performance. Improvements include:

Microsoft also shared today that the April 2018 Update is now fully available for all compatible devices running Windows 10 worldwide. The company started pushing out the April 2018 Update on April 30, meaning it took less than two months for the team to be confident the update is ready for everyone to download and install (compared to less than three months for the Fall Creators Update).

If you still don’t have the latest version of Windows 10 and don’t want to wait, go get the April 2018 Update.