Innovate.AI, a Microsoft-led global competition for artificial intelligence (AI) startups, has officially come to a close — with three regional winners emerging from around the world. A fourth company has claimed the “AI for Good” prize.

Microsoft Ventures, in partnership with Seattle-based Madrona Venture Group, London-based Notion Capital, and Vertex Ventures Israel, announced the $3.5 million contest last October. The plan was simple: Commission applications from AI startups in North America, Europe, and Israel; find the most promising ones in each region; and invite 10 of them to a “pitch-off” in front of judges to establish a winner.

The winners are as follows:

The winner of each region was awarded $1 million in equity-based funding from Microsoft Ventures — which rebranded as M12 just yesterday — and its VC partners, in addition to perks such as “up to” $500,000 in credits to use on Microsoft’s Azure cloud platform.

Israeli startup Voiceitt scooped up the “AI for Good” prize, aimed at the startup judged to be best using AI to improve society. Tel Aviv-based Voiceitt uses speech recognition smarts to translate unintelligible sounds into clear speech in real time, which could help people suffering from disorders such as Parkinson’s, cerebral palsy, autism, strokes, and more. Voiceitt won a $500,000 investment and $500,000 in Azure credits.

VentureBeat caught up with Nagraj Kashyap, corporate vice president and global head of M12 (formerly Microsoft Ventures) to get his thoughts on how the competition went, what happens next, and — crucially — any trends he picked up on.

While Kashyap didn’t share any specific details about how many submissions the competition received — either by region, or overall — he did reveal some interesting broad numbers around the markets that made the most submissions. In a separate statement issued by Madrona, the VC firm revealed that it had received more than 250 applications for the North America region, which gives us some context here.

In terms of where applications hailed from, the top five markets were all in Europe: France, the U.K., the Netherlands, Germany, and Spain. Plus, Israel made around half as many submissions as the entirety of North America, which isn’t bad when you consider that Israel has a population of around 8 million and North America has 500 million.

“[This is] clearly signaling the incredible density of startup talent and innovation coming from that region [Israel],” Kashyap said.

Indeed, this should come as little surprise, given that we’ve seen a great many AI startups emerge from Israel in recent times, spanning everything from autonomous vehicles — Intel snapped up Israel’s Mobileye for $15 billion last year — to less sexy but lucrative industries such as mining and energy.

Though there didn’t appear to be any regional trends in terms of specific areas of AI focus, Kashyap did note that certain industries were more attractive to AI startups than others. “Health care, biotech, and security were big focuses globally, but in general we didn’t notice any trends regionally that stood out from others,” he said.

While Microsoft has been increasing its investments in AI over the past couple of years, Madrona Venture Group — Microsoft’s partner for the North America region — has its own track record in AI investments. Two of its AI-focused portfolio companies, Lattice Data and Turi, were acquired by Apple over a nine-month period between 2016 and 2017.

Madrona investor Maria Karaivanova recently highlighted a bunch of trends she’d observed from the competition application process. “Intelligent applications are on the rise — as data becomes plentiful and easily available and accessible, using AI and machine learning to build a continuous learning system is a fundamental fabric of every application [and] is the way of the future,” she said.

Additionally, she noted that business models around AI startups are still evolving and don’t fit the traditional software model, which typically involves licenses or subscriptions. “We saw a combination of business models, some leaning toward pure professional services, others a hybrid between licensing and SaaS,” Karaivanova added. “It’s clearly an area that will evolve as the companies mature.”

Karaivanova also noted that there was a concentration around five core industries: Health care and research, financial services, IoT and edge computing, sales and marketing, and retail.

As for the North American winner, Madrona managing director and former Microsoft corporate VP S. Somasegar said that Envisagenics exemplified the kind of AI startups his firm wants to invest in.

“Envisagenics takes a critical issue of disease caused by cancer and genetic irregularities and applies AI to drive the discovery of new drugs,” he said. “It is just this type of big and world-changing thinking that we are looking for in startups as they apply this incredibly powerful technology to the core problems in our society.” 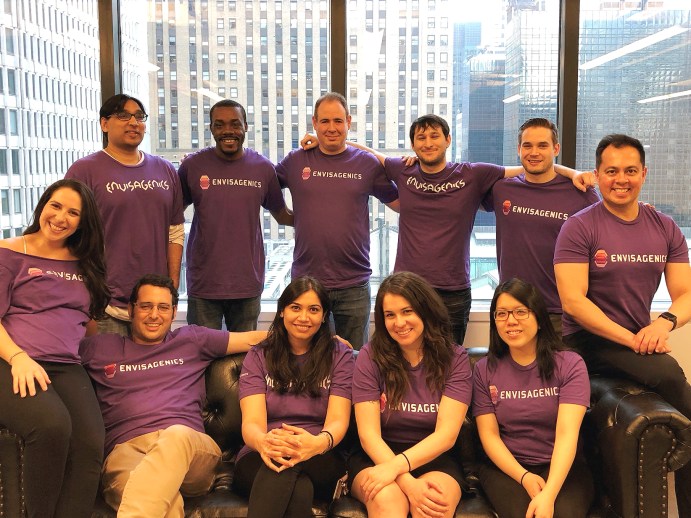 It could be argued that a “global” startup competition that just focuses on two continents, plus Israel, isn’t really all that global. So why not look at other regions, too? Well, that comes down to practicalities. “M12 was established in May of 2016 with a small team in the U.S. and Israel and expanded to include Europe last fall, so those regions became a natural starting place for us,” Kashyap told VentureBeat.

While it is possible that Microsoft may get involved in similar AI competitions in the future, Kashyap wouldn’t confirm the scope or whether such a competition could go truly global. But the company was able to glean direct teachings from having run the competition in the markets that it did.

“We always knew that there were startups all over the world working on transformative tech yet to be discovered, but this competition really helped expand our search beyond what’s on our radar and helped introduce us to those companies at very early stages that we don’t normally engage with,” Kashyap added. “It’s been amazing to see the innovation, passion, and commitment to AI across the world and at all stages.”