The CSAIL team’s algorithm, Mirai, which is also designed to produce predictions consistent across clinical environments, like the choice of mammography machine, was trained on a dataset of over 200,000 exams from Massachusetts General Hospital (MGH). A mammogram image is put through an encoder, which creates an image representation labeled with which view the image came from. Mirai aggregates representations of other images from other views to obtain a representation from the entire mammogram. With the mammogram, a patient’s traditional risk factors are predicted using what’s called a Tyrer-Cuzick model, which accounts for age, weight, and hormonal factors if available. With this information, Mirai predicts a patient’s risk for each year over the next five years. 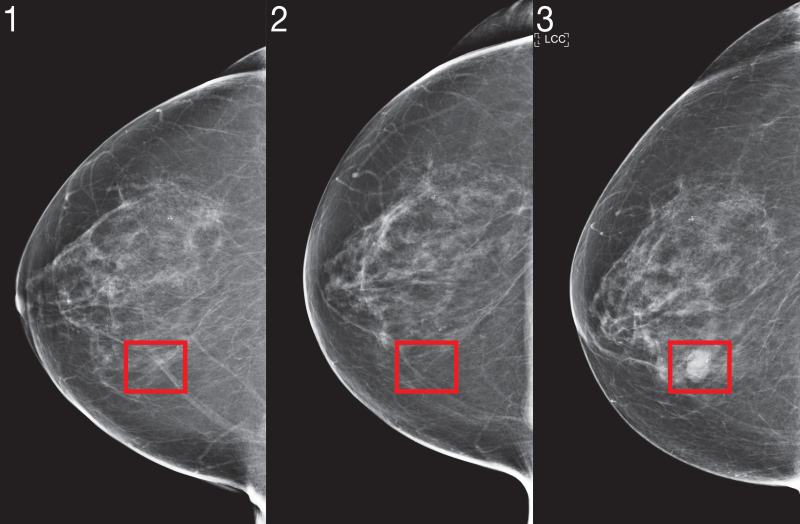 Mirai was designed to predict risk at all time points simultaneously via a tool called an “additive-hazard layer.” This layer anticipates a patient’s risk at a time point, like five years, as an extension of their risk at the previous time point (e.g., four years). Doing so allows the model to learn from data with variable amounts of follow-up.

To benefit from risk factors without requiring them, Mirai predicts that information at training time, and if it’s not there, it uses its own predictive version. Mammograms are rich sources of health information, and many factors including age and menopausal status can be predicted from imaging. As a result of this design, the same model can be used by any clinic globally, the researchers say.

Partly due to a reticence to release code, datasets, and techniques, much of the data used today to train AI algorithms for diagnosing diseases might perpetuate inequalities. To debias Mirai, the CSAIL team used an adversarial scheme where the model learned mammogram representations invariant to the source clinical environment, which helped it to produce accurate predictions.

According to the researchers, Mirai was “significantly” more accurate than prior methods — including a two-year-old method by a team of scientists from CSAIL and MIT’s Jameel Clinic — in predicting risk and identifying high-risk groups across test datasets from MGH, the Karolinska Institute in Sweden, and Chang Gung Memorial Hospital in Taiwan. When comparing high-risk cohorts on the MGH test set, the team found that their model identified nearly two times more future cancer diagnoses compared to the current clinical standard. Mirai was similarly accurate across patients of different races, age groups, and breast density categories in the MGH test set and with different cancer subtypes in the Karolinska test set.

Mirai is now installed at MGH, and the team says their collaborators are actively working on integrating the model into point-of-care.

Although Mirai doesn’t currently look at any of the patient’s previous imaging results, the team notes that changes in imaging over time contain a wealth of information. In the future, they aim to create methods that can effectively leverage a patient’s full imaging history.