Drones are versatile machines, which is why they’ve been used to ferry food to golf courses, perform reconnaissance for firefighters and first responders, and put on light shows at the Olympics opening ceremonies. But their propeller-forward form factors aren’t exactly conducive to power efficiency, which limits their flight time.

Fortunately, researchers at MIT’s Computer Science and Artificial Intelligence Laboratory (CSAIL), Dartmouth, and the University of Washington are investigating a new drone design approach that combines the best of quadcopters and fixed-wing airplanes. Their work, which they detail in a newly published paper that’ll be presented later this month at the Siggraph conference in Los Angeles, resulted in a novel AI system that allows users to dream up drones of different sizes and shapes that can switch between hovering and gliding with a single flight controller.

“Our method allows non-experts to design a model, wait a few hours to compute its controller, and walk away with a customized, ready-to-fly drone,” said MIT CSAIL grad student and leader author Jie Xu. “The hope is that a platform like this could make more these more versatile ‘hybrid drones’ much more accessible to everyone.” 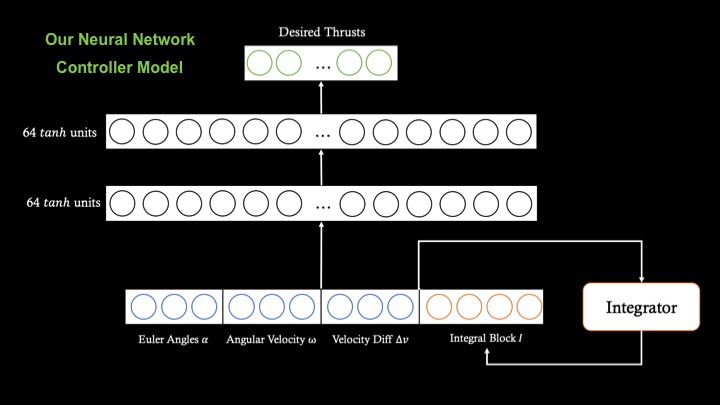 Above: A diagram of the AI controller.

As Xu and colleagues explain in the paper, traditional hybrid fixed-wing drones that can take off and land vertically are difficult to control, because they often require engineers to develop one system for hovering (“copter flight”) and another for gliding horizontally (“plane flight”), plus controllers for transitioning between the two modes.

AI can lend a hand here — researchers are increasingly turning to machine learning to create more adaptable control systems. But most methods lean heavily on simulation instead of real hardware, resulting in discrepancies.

To address this, the researchers’ system leverages reinforcement learning — an AI training technique that employs rewards to drive software policies toward goals — to train the model to track potential gaps between simulation and real-world scenarios, enabling the controller to adapt its output to compensate. It doesn’t need to store any modes, and it can switch from hovering to gliding and back again simply by updating the drone’s target velocity.

The team integrated their AI system into OnShape, a computer-aided design software, to allow users to select and match drone parts from a data set. Then, in a series of tests, they slotted the resulting design into a training simulator that tested its flight performance.

“With a new input representation and a novel reward function, we were able to narrow the reality gap that is common in reinforcement learning approaches,” wrote Xu and colleagues in the paper. “We expect that this proposed solution will find application in many other domains.”

The team leaves to future work fine-tuning the drone’s design — which they note currently doesn’t fully take into account the complex aerodynamic effects between the propeller’s airflow and the wings — to improve maneuverability. They also hope to overcome the copter’s inability to perform sharp turns.