In a preprint academic paper published in early April, MIT researchers describe a model that quantifies the impact of quarantine measures on the spread of COVID-19, the novel coronavirus. Unlike most of the models that have so far been proposed, this one doesn’t rely on data from studies about previous outbreaks, like SARS or MERS. Instead, it taps an AI algorithm trained to capture the number of infected individuals under quarantine using the SEIR model, which groups people into classes like “susceptible,” “exposed,” “infected,” and “recovered.”

This approach potentially achieves accuracy higher than or comparable to previous work, which could help to better inform governments, health systems, and nonprofits as they make treatment and policy decisions about social distancing. For instance, the model found that in places like South Korea, where there was immediate government intervention, the virus spread plateaued more quickly.

“Our model shows that quarantine restrictions are successful in getting the effective reproduction number from larger than one to smaller than one. The [model] is learning what we are calling the ‘quarantine control strength function,'” said George Barbastathis, MIT professor of mechanical engineering, who developed the model over the course of several weeks with civil and environmental engineering Ph.D. candidate Raj Dandekar as a part of a final class project. “That corresponds to the point where we can flatten the curve and start seeing fewer infections.”

The MIT model was trained on data collected from Wuhan (China), Italy, South Korea, and the U.S. after the 500th case was recorded in each region (January 24, February 27, and February 22 for Wuhan, Italy, and South Korea, respectively) until April 1. After 500 iterations, it learned to predict patterns in the infection spread, drawing a correlation between quarantine measures and a reduction in the virus’ effective reproduction number. 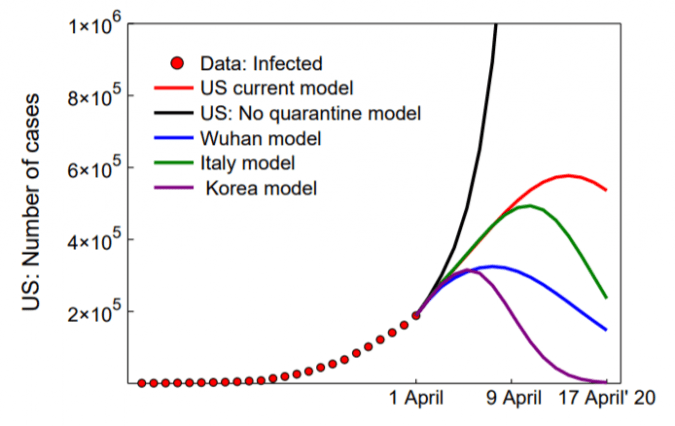 Above: Data from the MIT disease model.

As the number of cases in a particular country decreases, the forecasting model transitions from an exponential regime (indicating that the virus is spreading exponentially) to a linear one (indicating that infections are plateauing). Italy began entering this linear regime in early April, and the model anticipates that the U.S. will make a similar transition somewhere between April 15 and 20 — similar to other projections like that of the Institute for Health Metrics and Evaluation.

The model also predicts that the infection count in the U.S. will reach 600,000 before the rate of infection begins to stagnate.

“This is a really crucial moment of time. If we relax quarantine measures, it could lead to disaster,” said Barbastathis. “If the U.S. were to follow the same policy of relaxing quarantine measures too soon, we have predicted that the consequences would be far more catastrophic.”

The MIT model agrees with one published earlier this year by researchers at Microsoft, the Indian Institute of Technology, and TCS Research (the R&D division of Tata Consultancy Services), which learned policies automatically as a function of disease parameters like infectiousness, gestation period, duration of symptoms, probability of death, population density, and movement propensity. Over the course of 75 simulations with simulations lasting 52 weeks (364 days), it showed that governments that locked down 5% to 10% of communities experienced a lower peak of COVID-19 infections.

Separately, an international team of researchers used human mobility data supplied by Baidu to elucidate the role of COVID-19 transmission in Chinese cities. They found that, following the implementation of control and containment measures, the correlation between the geographic distribution of COVID-19 cases and mobility dropped and growth rates became negative in most locations, indicating that the measures mitigated the spread of COVID-19.

That said, it’s important to keep in mind that even the best AI models — like those developed by HealthMap, Metabiota, and BlueDot, which were among the first to accurately identify the spread of COVID-19 — only learn patterns from historical data. As the Brookings Institute noted in a recent report, while some epidemiological models employ AI, epidemiologists largely work with statistical models that incorporate subject-matter expertise. “[A]ccuracy alone does not indicate enough to evaluate the quality of predictions,” wrote the report’s author. “If not carefully managed, an AI algorithm will go to extraordinary lengths to find patterns in data that are associated with the outcome it is trying to predict. However, these patterns may be totally nonsensical and only appear to work during development.”