It’s not easy to strike it rich in the $15 billion recorded music industry — if you’re a musician, that is. Spotify, the world’s most popular audio streaming service, with more than 70 million paying subscribers, pays $0.006-$0.0084 per play (about $7,000 per one million streams), and that money’s split among producers, record labels, songwriters, and artists. Platforms with smaller footprints have even tighter purse strings.

It’s a problem MusicLife, a collaboration between the Singapore-based nonprofit MusicLife Foundation and the Japan-based MusicLife Company, aims to solve with a combination of blockchain technology and artificial intelligence (AI). Today the company announced a $5 million funding round led by Metropolis VC, which it says it’ll use to grow its music trading and sharing platform.

“We’re thrilled to be working with Metropolis VC to achieve our vision of decentralizing the music industry,” Kaiming Liu, founder and chair of MusicLife, said in a statement. “The music industry is currently dominated by giants, burdened by copyright restrictions, and lacking fairness and transparency for artists. MusicLife will funnel more profit to artists while giving fans the opportunity to become song owners.”

MusicLife, like Pandora and Spotify, offers a mix of complementary and paid options through the MusicLife Exchange, a digital storefront. Songs are free for the first 50,000 plays, after which they’re priced by an AI-powered system that takes into account their popularity — defined here as their total daily generated revenue, total play time, the number of listeners, and the locations where they’re played. Generally speaking, a higher number of plays corresponds to a higher value in MitCoin (MITC), one of MusicLife’s two virtual currencies.

Purchases on the MusicLife Exchange — which hover around a dollar per song on average — come with more than just playback privileges. Artists license their work’s copyright to the MusicLife Foundation for distribution, retaining 95 percent ownership. (MusicLife says that a full 50 percent of its income will be invested in an incubation program for “music and musicians.”) Each song generates a MusicToken (MSCT), shares of which are traded in MITC. And listeners have the choice of either paying MITC to stream songs or investing with MSCT (up to 45 percent of the artists’ aforementioned 95 percent), which earns them MITC dividends as others buy in. 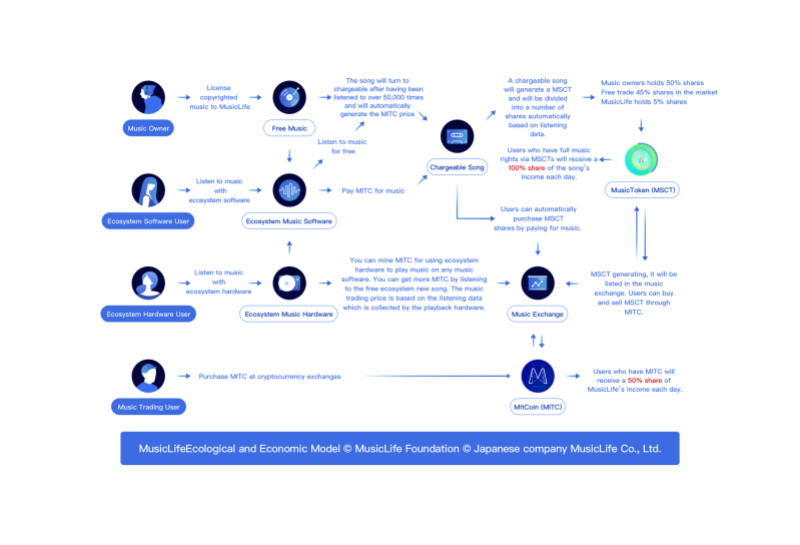 Cash is but one way to acquire MITC. Another is through hardware that takes advantage of MusicLife’s software development kit — folks who volunteer their listening data can earn MITC directly, effectively “mining” the cryptocurrency. MusicLens, a $189 pair of sunglasses with built-in bone-conduction speakers and sensors that verify a person’s listening, will be the first hardware to facilitate this type of exchange when they go on sale in “late 2018.”

MusicLife isn’t the first to employ blockchain technology in music distribution. UjoMusic and New York-based blockchain studio ConsenSys built an Ethereum-based platform that lets users pay artists directly for personal or commercial licenses, via a smart contract. (It collaborated with Imogen Heap to release a song in October 2015.)

PeerTracks, another music-focued startup, allows fans to stream or download songs by purchasing “notes,” blockchain tokens with a value tied to market forces. The higher an artist’s profile, the pricier their music.

However, MusicLife contends that its blockchain solution is one of the few designed specifically to protect against piracy. Its “hardware-embedded system” calculates the amount of music streamed over time on any hardware that taps into its API, preventing fraudulent or falsified playback data.

“MusicLife can perform fast transactions, bookkeeping, and confirmation of rights without the need for human verification,” MusicLife says on its website. “Through MITC, all members of the community can be strongly motivated, and everyone can actively promote the development of the platform.”

The startup plans to launch a first-party website and app in the coming months and piloted the MusicLife Exchange earlier this year. Chinese music service Echo integrated with it in July via MusicLife’s wallet API.

MusicLife claims that more than 600,000 people have signed up to use the platform to date.